1,058 days. Or 2 years, 10 months and 24 days since the last time I had seen Hearts play. This wasn’t because I was unavailable – my blog visits will clearly show that – or too busy. This was a self-imposed ban due to the running of the club being an absolute shambles. This was even during the Scottish Cup win last summer and Europa League campaigns that were then promptly crushed by English sides. However, November 8th 2012 saw Hearts make an announcement that their upcoming home game against St Mirren could be their last. The money had gone, the walls came tumbling down. This was now no longer about enjoyment – this was about survival. This was the first Hearts game that I was in Edinburgh for and could make – this was a duty. 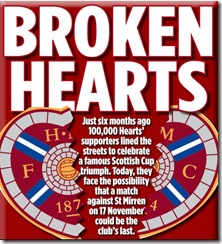 Kilmarnock is a large burgh in East Ayrshire. The name Kilmarnock comes from the Gaelic cill (church), and the name of Saint Marnoch or Mernoc who is also remembered in the name of Portmarnock in Ireland. It is believed by some that the saint founded a church there in the 7th century. The core of the early town appears to have lain around what is now the Laigh Kirk, (Low Church), although the oldest parts of the current building are no earlier than the 17th century. In 1668 the town was largely destroyed by an accidental fire and about 120 families lost most of their possessions and were forced to live destitute in the fields surrounding the town. These tradespeople had no other way of making a living and had already been driven to the edge of poverty by having troops stationed with them as part of the anti-Covenanter measures. Parish churches throughout Scotland collected money for the relief of these homeless citizens. A comparatively modest settlement until the Industrial Revolution, Kilmarnock extended considerably from around 1800 onwards. The whisky brand Johnnie Walker was situated in the town, where it had been since the 19th century. However it was moved to Fife and Glasgow in 2012. 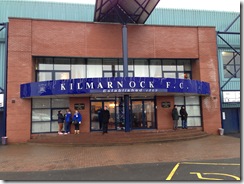 Kilmarnock are the oldest professional club in Scotland having been founded in the very earliest days of organised football in Scotland. A group of local cricketers looking for a sporting pursuit to occupy them outside the cricket season looked to form a football club and on 5 January 1869 the club was founded during a general meeting at Robertson's Temperance Hotel. Although not amongst the founder members of the Scottish Football Association in 1873, Kilmarnock did join in time to compete in the inaugural Scottish Cup tournament in 1873–74. Their game in October 1873 against Renton FC in the 1st Round is also said to be the first game ever played in the Scottish Cup. Kilmarnock joined the Scottish League in 1895 and after winning consecutive Second Division titles were elected to the top flight for the first time in 1899. In 1920 Kilmarnock won the Scottish Cup for the first time beating Albion Rovers at Hampden. This was followed soon by their second success in 1927 where the beat massive favourites Rangers 2–0. Their greatest success came in 1965 where they won the title at Tynecastle, forcing Hearts into 2nd place. (If goal difference was the deciding factor, Hearts would have won by 12 goals) Since then they have been nowhere near the title and probably never will be again. Having spent some time in the 2nd Division (Level 2), they were promoted back in 1993 and have been in the top flight ever since. They have picked up cup success in recent years with the Scottish Cup back in 1997 and the League Cup in 2012. 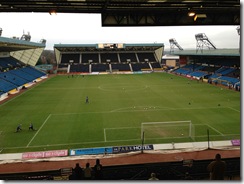 Rugby Park is one of the biggest grounds (capacity wise) in Scotland, holding 18,128. It is an impressive venue too, which has been home to Kilmarnock since 1899. Pressures in the 90s from the Taylor Report meant that this stadium had to become an all seater and it underwent redevelopment in 1994/95. The Main Stand (in the right of the picture above) was the only one open during this time and is similar in style to the Main Stand at Tynecastle with the pillars in shorter style than the rest. The two stands behind the goals, the Moffat Stand and Chadwick Stand (for away fans) look identical, with the away fans only allowed to sit/stand in the top tier. The East Stand which is the biggest in the ground runs down the other side of the pitch and had the majority of the Killie support sat in it. It’s a modern stadium and one that looks good – it’s just a shame that Kilmarnock get nowhere near the 18,000 capacity so it can be quite flat in the ground at times. 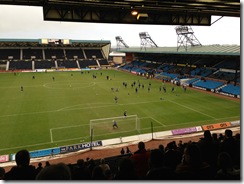 Last season, Hearts as we all know had various money problems with wages not being paid on time constantly. While they slumped to a disappointing 5th place finish, the 5-1 Scottish Cup win over Edinburgh’s 2nd team saved the season and humiliated Hibs on the national stage, again. This season had seen some positives, but mainly negatives as boss John McGlynn tried to get a team who had no morale and not getting paid a lot of the time to perform. While pushing a dreadful Liverpool side close in the Europa League is a positive, selling our best player in the form of David Templeton, losing to Dundee (twice!?) and going out the cup to Hibs is just not great and that’s before all of the financial problems. With the club under threat and now a transfer embargo in place on the club, which was then appealed and made even worse (look out for that one going through the high courts) the short-term future of the club looks bleak. I do often wonder if it is worth just cutting our losses and starting again in Division 3, as long as Tynecastle can be kept. The fact is though, the current squad has some quality in there and if a buyer for the club can be found and we can actually sign some players – this club could easily compete at the top end of the league. That’s probably someway off though – let’s just survive this season, hopefully with our SPL status in tact. 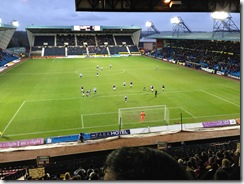 Despite all of the current problems surrounding the club, Hearts (backed by a good away following of around 1000) made a reasonable, maybe even solid start to the game. Andrew Driver fired over the bar on 2 minutes after some good build up play around the Killie area. When you are as pessimistic as me when watching Hearts (especially away from home!) you do fear when the home side attack, but when Ryan McGowan produced an excellent block from a James Dayton shot, this had the look of a decent day. The away side continued to press and Ryan Stevenson had a deflected shot saved by Cammy Bell. This was looking ok – again the problem of not having a clinical striker to stick away these chances was causing us problems, but that has been the case since 2008. Killie did come back into it though and had a goal ruled out when Paul Heffernan was put through and slotted home, but was well offside. Despite looking solid we’ve always had that ability to self-destruct instantly and that happened on 26 minutes. Dayton was floating around on the right wing and made a burst into the area. Despite not really going anywhere and probably about to run the ball out of play, Webster made a foolish challenge and took him out. Penalty. Nobody in the away end had any complaints and Liam Kelly converted the spot kick. Massively harsh on Hearts and it was no surprise we spent the rest of the half with the ball, albeit not creating that much with it. When we did it caused the home defence problems and Gordon Smith had a brilliant equalizer ruled out as John Sutton had “fouled” in the build-up play to the goal. The last chance of the half again went to the away side as Driver ripped the Killie right back, again and his cross was just headed over by Sutton. 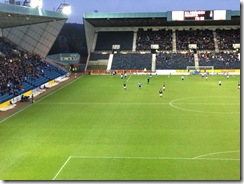 Hearts pushed on again in the 2nd half as they went for the equalizer they deserved. Driver went on a mazy run like he used to and fired a shot that again Bell did well to save. A ridiculous moment came on 52 minutes when Sutton slid in as Smith fired a cross/shot in but just missed the ball and caught Bell. The Killie goalkeeper made the most of it though which caused Sutton to pick up a yellow from the useless Steven McLean. We normally create one golden chance per game and this time it fell to Callum Paterson. The young striker did brilliantly to skip past two defenders and found himself one on one with Bell. However instead of keeping his cool, he fired straight at Bell and the chance had gone. By this point, I am unsure of how Killie were still in this game let alone winning as they were being pushed further and further back. Captain Marius Zaliukas then had his chance as he smashed a header wide from a corner when Bell had missed the ball. Zaliukas was lucky to stay on the pitch as the game went into the final stages when he headed the ball up and behind him and allowed Heffernan to be clean through. Captain Z however tugged back at his shirt just outside the area and brought him down. While Rugby Park expected a red card, McLean only handed him a yellow in another strange decision. Late on Hearts pushed forward and even sent up goalie Jamie MacDonald for a corner as Killie managed to hang on, just, as we couldn’t score. 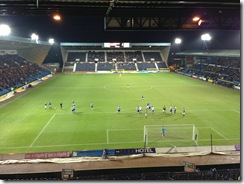 Considering our poor recent record at Rugby Park and my awful record watching Hearts, this result really wasn’t a surprise. The performance however was more than acceptable as this should have been all 3 points for Hearts, nevermind deserving of a draw. It again showed the potential of the side, although McGlynn is a man under pressure with some fans unimpressed with his substitutions during the game and general tactics. Kilmarnock are a strange club. The stadium and general foundations that most will be jealous of, but a tiny tiny fanbase that makes you wonder how they do survive. I don’t know if staff at the club have considered this but surely it would make more sense to only have two stands open so the fans can get together and make better noise rather than the occasional chant that is currently there. If this is the last time I’ve watched Hearts in their current form, then it has been a great journey. I doubt I’ll get to another away game this season so I can only watch from afar and hope survival can be ensured. Anyone out there want to buy a football club?

Photos from Kilmarnock vs Hearts 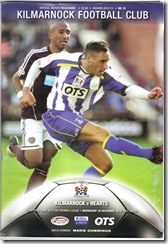 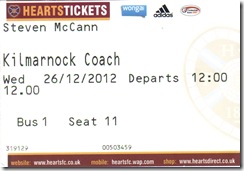