Despite the snow having some dreadful banter and wiping most of the games out across the county the week before, the nice people at East Midlands Trains allowed me to change tickets for a reasonable price. Therefore I could take in the rearranged Borrowash Victoria vs Ascot United clash for this Saturday. That was until the snow hit again and wiped it out, again. Not wanting to go begging to East Midlands Trains for the 2nd successive week, I searched for a match near to Derby train station. Derby County, job done. 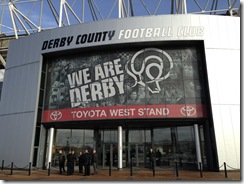 Derby is a city in the East Midlands region of England and lies upon the banks of the River Derwent in the south of the ceremonial county of Derbyshire. The city has Roman, Saxon and Viking origins with Djúra-bý, recorded in Anglo-Saxon as Deoraby "Village of the Deer". This popular belief is asserted by Tim Lambert who states, "The name Derby is derived from the Danish words deor by meaning deer settlement". However some assert that it is a corruption of the original Roman name 'Derventio'. During the English Civil War, Derby was garrisoned by Parliamentary troops commanded by Sir John Gell. These troops took part in the defence of nearby Nottingham, the Siege of Lichfield and many other engagements in Nottinghamshire, Staffordshire and Cheshire. 100 years later, Bonnie Prince Charlie set up camp at Derby in December 1745, whilst on his way south to seize the British crown. Derby and Derbyshire were centres of Britain's Industrial Revolution. In 1717, Derby was the site of the first water powered silk mill in Britain, built by John Lombe and George Sorocold, after Lombe had reputedly stolen the secrets of silk-throwing from Italy. The beginning of the next century saw Derby emerging as an engineering centre with manufacturers such as James Fox, who exported machine tools to Russia. An industrial boom began in Derby when Rolls-Royce opened a car and aircraft factory in the town in 1907. In 1964 the British Rail Research Division opened to study all aspects of railway engineering from first principles. Its first success was in drastically improving the reliability and speed of goods trains, work which led to the development of the Advanced Passenger Train. Trains are still a massive part of the City today with Bombardier residing in the town. 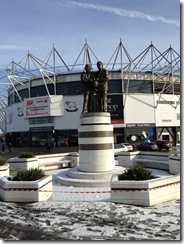 Derby County FC were formed in 1884 as an offshoot of Derbyshire County Cricket Club in an attempt to give players and supporters a winter interest as well as secure the cricket club extra revenue. The club’s first competitive match came in the 1885 FA Cup, where they were unlucky (apparently) to lose 7–0 at home to Walsall Town. Arguably the most important game in the club's history came in next season’s FA Cup, when a 2–0 victory over Aston Villa, already an emerging force in English football, helped establish Derby County on the English football map, which resulted, in 1888, with an invitation into the inaugural Football League. In 1895 the club moved to a new stadium, The Baseball Ground (so called because it was previously used for baseball), which became their home for the next 102 years and adopted their traditional colours of black and white. After turning into a yo-yo club during the 1910s, they upped their game in the First Division during the 20s and 30s and achieved some excellent finishes in the league. After a 1946 FA Cup win, the glory days came in 1967 when Brian Clough and Peter Taylor took over. Signing Hearts’ (arguably) best ever midfielder in Dave Mackay from Spurs, the Rams won promotion in 1969 and then won their first ever Football League title in 1972. They then reached the semi-final of the European Cup the next season before Clough-Taylor left in 1973. Such was their achievements, a statue (see above) was erected outside Pride Park some 37 years later. Despite winning another title in 1975, the club started to drop down the leagues and hit the Third Division in 1984. With Robert Maxwell now in charge off the field, his money being pumped in allowed Derby to move back up through the leagues and back into the First Division in 1987. When Maxwell died and his money gone, Derby unsurprisingly dropped back but did return to the Premier League in 1996 when under Jim Smith they finished 2nd in the second tier. 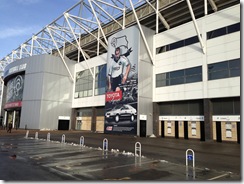 Their final season at the Baseball Ground saw Derby finish 12th before they moved to the 30,000 seater stadium at Pride Park. Based in the east of the City in an industrial park, it’s a short walk from the railway station. For the modern grounds, its fairly similar all round with the imaginatively name East, West, South and Derbyshire Building Society Stands, the ground is quite compact and provides all views from where ever you seem to sit. With a Greggs and Starbucks built into the ground and a Subway about 10 seconds away across the road, getting something to eat which isn’t football ground food is also fairly easy. A little known fact is that Pride Park is the 133rd largest stadium in Europe. (You can sleep well tonight) Playing at Pride Park, Derby managed to keep their Premier League status intact until 2004 when they were finally relegated while suffering from financial problems. They did return to the Premier League in 2007 but embarrassingly were relegated straight back down by March and with the League’s lowest ever points total. They haven’t been back since but now managed by Nigel Clough, they have achieved some solid finishes over the past few seasons. Yet the feeling remains that if Nigel didn’t have the relations that he does, he would have been sacked a while ago. 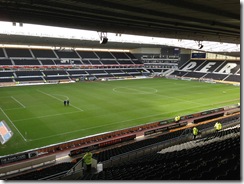 This season, Derby are on a much stronger financial footing, backed by General Sports Entertainment, they have invested in youth with Will Hughes (17) and Mason Bennett (16) already making an impact this season. Derby were in midtable coming into this game, in 13th and 9 points off the play-offs. The remainder of the season will be interesting for Derby fans to see if they push up or fall down. Their 3rd Round tie was against League 1 flyers Tranmere, so a 5-0 win against them was mightily impressive. Their opponents had rarely been out of the news this season as Blackburn Rovers 2012/13 shambles was in town. Starting off with an impressive start (as I predicted), their fans hounded Kean out of the club and so Henning Berg came in and proceeded to take them down the table. He was punted after only 57 days and Michael Appleton has come in with a view to try and manage every FL club. With the board in turmoil, a club that appears to be on the way down, Appleton has really taken a challenging job on. However with some class throughout the squad, Blackburn should really be aiming for the play-offs at a minimum and are only 9 points off them currently. An easily achievable target. 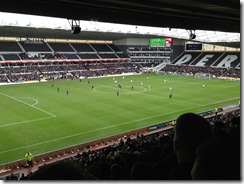 Before the match had even kicked off, the Derby fans had booed referee Stuart Atwell, claiming “we only get the shit referees”. Atwell hasn’t refereed a Derby game since November 2008 when he took charge of Derby vs Forest so something clearly happened then. I had inadvertently bought tickets to stand at the back row with the Derby “ultras” despite there being far more people there than seats available, but the stewards didn’t mind. And to be fair, the 13,000 that had shown up had very little to watch during the 1st half. Whilst not as bad as Palace v Stoke in the previous round but there was very little for us to cheer. Blackburn had the better chances that were created. Morten Gamst Pedersen fired a free kick in which Scott Dann headed wide before Pedersen fired a free kick straight on goal which Derby goalie Adam Legzdins did well to react to. While Derby struggled to create anything with Jamie Ward being played out of position and Conor Sammon generally useless upfront, (Ireland international? Really?!) Blackburn had Danny Murphy playing some excellent Hollywood balls across the pitch to create attacks. It was a surprise we saw a goal in the 1st half, but no surprise that Blackburn scored it. Some dreadful play allowed the away side to break up an attack and allow Colin Kazim-Richards to race through after Richard Keogh had made a meal of a tackle. The Coca-Cola kid then fired a shot that Legzdins could only palm into the net. It was good to see Blackburn have Kazim-Richards on their version of the ‘conga-song’. (Cover yourself in gravy, sing “Do do do Colin Kazim-Richards!” to this and you’ll pass off as a Rovers fan no problem) 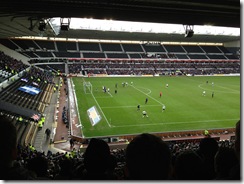 Derby nearly snatched an undeserved equalizer right at the start of the half when Jake Kean’s clearance was blocked by Conor Sammon but he managed to collect Ward’s cross. That was really as good as it got for Derby as Blackburn then dominated for the remaining 40 minutes. Firstly Ruben Rochina fired just wide after some excellent build up play from Scott Dann. Then Rovers had a goal from Markus Olsson ruled out for offside as he tapped in from a Jordan Rhodes cross. Rochina then fired a low drive from the left which Legzdins did well to save. However, as is normally the case, Derby didn’t defend the corner and were promptly 0-2 down on 66 minutes. The initial cross was cleared, but there was Murphy and his Hollywood pass found Dann all on his own on the left and he was calm enough to take a touch before smashing a half-volley past Legzdins. At this stage, Derby had managed a massive zero shots on goal and fans now started chanting “4-4-2” as they demanded a change. Before Clough could react, the Derby defence went missing again and it was 0-3 as the ball broke around the penalty box and Jordan “Scotland’s Saviour” Rhodes finished easily for his 17th Rovers goal. That was game over as Rovers had chances to add more goals as by 85 minutes Pride Park was fairly empty. Derby managed a total of zero shots at the full-time whistle – dreadful. 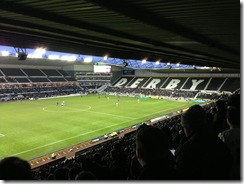 Blackburn’s reward in the 5th Round is an away tie at Arsenal so will be exiting the competition at the next round. They were easily winners here as Derby were toothless, clueless and hapless as 3 goals could have easily been so much more. Derby’s fans are a passionate bunch though and when they lost faith, the gallows humour came out but they still made a fair bit of noise despite how badly their team played. Pride Park is never going to win awards for being a unique ground but its modern, provides good views and is therefore an enjoyable place to watch football. If Morecambe ever come here, I’ll be back but until then, it’s not a ram, it’s a goat.

- Atmosphere: 8/10 (good atmosphere created by both sets of fans) 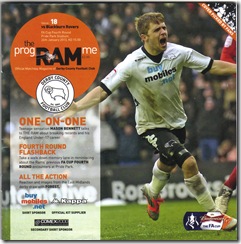