It’s Christmas time and there’s no need to be afraid. You’re back in Scotland and there’s loads of games to be played. As the song goes, or something like that. The weather had beaten me on a recent jaunt to Scotland when I had tried to go watch Cowdenbeath. However, I was back in the greatest country in the world and while matches were getting rained off everywhere, the Blue Brazil had managed to get their game against Livingston on and so I was finally getting to the Kingdom of Fife. 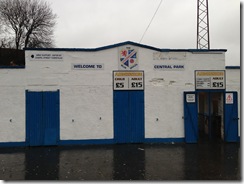 Cowdenbeath is a town and burgh in west Fife. The earliest indication of human activity in the immediate vicinity of the current site of Cowdenbeath was provided by the discovery of late bronze-age vessels containing incinerated human remains, in 1928. There is no evidence of a permanent settlement establishing itself around the current site of Cowdenbeath until the designation of the original Beath Kirk as a parish church in 1429/30 to act as a focal point to serve the surrounding area. By 1790 the records show that the parish of Beath had about 100 families whose livelihood came mainly from the soil. This church was replaced by the present church, built in 1832 and enlarged in 1886. Cowdenbeath first came into prominence around 1820 as a stop on the north-bound coaching route to Perth. Indeed, Queen Victoria's entourage stopped at the Cowdenbeath Coaching Inn to change horses, on her first trip to Scotland in 1842, en route for Balmoral. The arrival of the Oakley Iron Company around 1850 was to have a long-lasting impact upon Cowdenbeath and make the name synonymous with coal-mining for almost 100 years. The Forth Iron Company took over around 1860 then amalgamated with the Cowdenbeath Coal Company in 1872. This effectively made the Fife Coal Company one of the largest coal mining concerns in Scotland. Such was the upsurge in mining activity that the population of Cowdenbeath doubled in the ten years between 1890 and 1900 and gave rise to the nickname "Chicago of Fife". 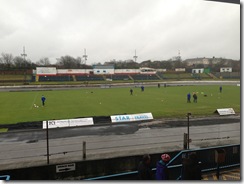 Cowdenbeath traditionally date their origin to the merger of two local clubs, Cowdenbeath Rangers (formed 1880) and Cowdenbeath Thistle, which occurred in 1881. However research undertaken by the club’s historian suggest the actual founding should be properly dated to 1882. As they are a small provincial club, they have had few major successes in the Scottish game, particularly in the modern era. The club were relegated in the 1933–34 season but claimed their third Division Two championship in the 1938–39 season. However, the outbreak of the Second World War cut short Cowden's return to Division One, and the club closed down for the duration of hostilities. When peacetime football resumed, the club were controversially placed in the new second tier. While a 1949 League Cup success over Rangers at Ibrox was a highlight of the early post-war period, Cowden struggled to return to the elite level of Scottish football. A solitary season in Division One that followed remains the club's only top flight campaign since the 1930s. More recently, hopes for the future were raised when Cowden were promoted to the First Division in season 1991–92, but they soon slumped back to the basement of the Scottish League amidst a run of 38 League games without a win at Central Park. More recently Craig Levein and Mixu Paatelainen started their managerial careers here as did Danny Lennon who achieved promotion to the 2nd Division in 2009. More recently Cowden have become a yo-yo club after relegation in 2011, they romped to the Second Division title under Hearts legend Colin Cameron who is now player/boss here. 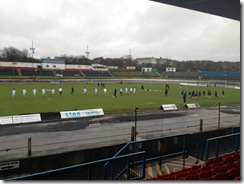 The reason I have wanted to get to Cowdenbeath’s Central Park for some time is because of the dilapidated nature of the place. A delightfully ramshackle stadium that has been home to the club since 1917, is under threat with the club wanting to move to a new ground on the edge of town in the near future. Central Park has two main stands, the Main Stand which was partially destroyed by a fire in 1992 and so another separate stand was built next to this in 1995. The Alex Menzies Stand was where I was situated for the game and while it is a seated stand, stewards didn’t mind fans (including me) standing on a raised step right at the back of a stand so I had an excellent view of the game. The rest of the ground is uncovered with the South Terrace directly opposite the main stands. Two curved terraces complete the venue and even in the pissing rain, this is a unique place to watch football. A must visit. And I haven’t even discussed the stock car track! 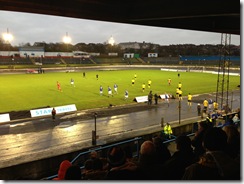 Unsurprisingly considering the size of the club, Cowden are struggling towards the bottom of the 1st Division. They were going into this game in 7th position and around the relegation playoff spots. With Dumbarton looking already doomed, The Blue Brazil will be competing against Airdrie Utd and Hamilton Accies to try and avoid going up against Division 2’s second best in May. With no league win since September 1st when they beat Airdrie 3-0, Cowden were needing one quickly, but with no goals in their last 3 games (albeit one was against SPL St Johnstone in the cup), just a goal would be a start. I had seen Livingston not that long ago, back in March, in John Hughes first game in charge. Since then it’s been all change as Hughes bizarrely took the Hartlepool United job to try and prep them for League 2 next season and Gareth Evans has been in charge since. The ex Hibee reserve team coach had seen a steady start with Livi up in 4th but some 10 points behind leaders Partick for this game. 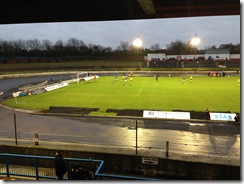 Considering Cowden couldn’t buy a goal in the games prior to this, taking the lead in the 1st minute is something that very few people would have put money on. Winning an early corner, Dean Brett managed to get the ball in after an initial block. Andy McNeil could only parry the ball to Thomas O’Brien who’s shot was blocked by Callum Booth but fell kindly to Marc McKenzie to bundle the ball in from about 2 yards out. With McNeil picking the ball out of his net being the first genuine touch the visitors got, they looked slightly startled and they couldn’t get going at all. The Cowden midfield lead by Colin Cameron (never thought I’d get the chance to see him play again!) hustled the Livi side into making constant mistakes while they continued to create good chances. It should have been 2-0 on 25 minutes when Lewis Coult hit the bar following in McKenzie’s cross. Livi offered very little in the first half but Liam Fox did blast over the bar in a rare chance they created. 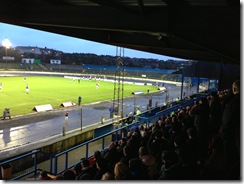 Livi did play far better in the 2nd half but were almost caught out again by a slow start when Kyle Miller forced a save from McNeil. The away side started to dominate after this however as Marc McNulty fired a low drive wide from the edge of the area. With more and more possession an equalizer looked like it was always going to come and it did arrive on 70 minutes. Jordan Morton worked some space down the right and fired a great cross in where Stefan Scougall was on hand to fire in from 6 yards. The game was now extremely open but Livi were still continuing to create the chances to try and find a winner which looked only a matter of time. On 77 minutes I witnessed miss of the season when Scougall missed an open goal from 6 yards as he fired wide. Cowden then pushed forward and late on O’Brien fired a 30 yarder off the bar with McNeil beaten. A little while later John Armstrong fired a header off the post as Livi were then lucky to escape with a point. 1-1 it finished which was a fair result, but both sides should have added to their only goal. 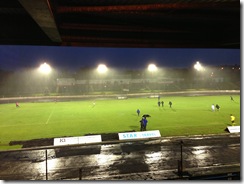 Having read some other reports on some dire SFL1 games, I was lucky that even in extreme conditions, this was a great watch. Credit to both sides for playing some decent football in this weather. Central Park is a classic ground that people need to get to before The Blue Brazil leave it in the near future. I was wanting to stand with the Cowden Ultras in the 2nd half on the terrace but the rain lashed it down so I decided to stay under cover. With them being a friendly club, I’ll be back here one day before the ground disappears to get some pictures on the other side in a truly unique footballing arena.

Photos from Cowdenbeath vs Livingston 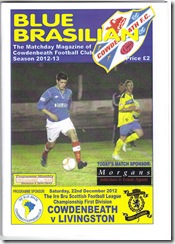