Out of the 25 games I’ve seen this season, 14 of them have been in some form of cup competition. (Always supplying those useless statistics!) I’ve already discussed some of the reasons why I probably prefer these knockout clashes to a normal league game but there was a time when I enjoyed frequenting a league in the north of the country. A time when life was a little easier (actually it wasn’t) and where one could watch 22 northern blokes kick the shit into each other. That was the Unibond League. Now under a new sponsorship name of Evo-Stik, one of it’s teams had made a storming FA Trophy run and were playing at a ground I’d wanted to get to for a while – easy choice! 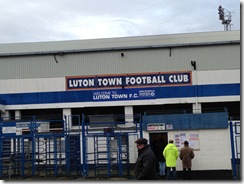 Luton is a large town and unitary authority of Bedfordshire, 30 miles north of London. The earliest settlements in the Luton area were Paleolithic encampments and settlements re-appeared after the ice had retreated in the Mesolithic period around 8000 BC. The first urban settlement nearby was the small Roman town of Durocobrivis at Dunstable, but Roman remains in Luton itself consist only of scattered farmsteads. The foundation of Luton is usually dated to the 6th century when a Saxon outpost was founded on the River Lea, Lea tun and is recorded in the Domesday Book as Loitone. By 1240 the town is recorded as Leueton and had a market for surrounding villages in August each year. The hat making industry began in the 17th century and became synonymous with the town. By the 18th century the industry dominated the town. (Giving rise to Town’s nickname – the Hatters) Hats are still produced in the town but on a much smaller scale. The town grew strongly in the 19th Century and in the 20th century, the hat trade severely declined and was replaced by other industries. In 1905, Vauxhall Motors opened the largest car plant in the UK in Luton. In 1914 Hewlett & Blondeau Aviation entrepreneurs built a factory which began Aircraft production built for the war effort, the site was purchased in 1920 by new proprietors Electrolux domestic appliances and this was followed by other light engineering businesses. The pre-war years, even at the turn of the 1930s when the Great Depression, were something of an economic boom for Luton, as new industries grew and prospered. 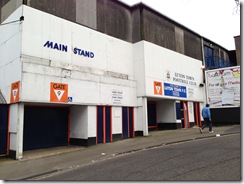 Luton Town FC were formed in April 1885 as a result of a merger of the two leading local teams, Luton Town Wanderers and Excelsior. Initially based at Excelsior's Dallow Lane ground, they became the first club in southern England to become professional. The club was a founder member of the Southern League in the 1894–95 season and finished as runners-up in its first two seasons. It then left to help form the United League before joining The Football League for 1897–98, concurrently moving to a new ground at Dunstable Road. Poor attendance, high wages, and the high travel that resulted from Luton's distance from the northern heartlands of The Football League crippled the club financially and they returned to the Southern League. The moved to their current ground of Kenilworth Road in 1905 and rejoined the FL in 1920. Luton’s first period of success in the FL came in the 50s when managed under Dally Duncan, had club legend’s Gordon Turner, Bob Morton and Syd Owen playing for them and they reached the top flight as well as playing in the 1959 FA Cup Final. (Where they lost to Forest) They turned into a yo-yo team during the 60s and 70s, but famously stayed up in 1982/83 when a late winner by Raddy Antić saved them at the expense of Man City and David Pleat did his jig across City’s Maine Road pitch. They won the League Cup in 1988 with a famous win over Arsenal but since then have fallen from grace and spent most of the time in the basement divisions, barring a brief stay in the Championship from 2005-2007. It got worse for them in 2008/09 when they were deducted 30 points and were relegated from the Football League to the Blue Square Premier where they have been stuck ever since. The closest to coming back up was a Play-Off Final defeat to AFC Wimbledon on penalties. 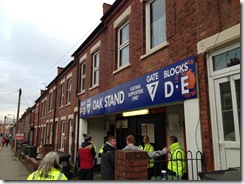 Luton are again up in the higher reaches of the Blue Square Premier this season and despite the slow start, they found themselves in 5th place during this cup break. While 8 points off leaders Wrexham, they did have 3 games in hand on them so Luton are “in the mix”. While the FA Trophy isn’t their highest priority, the week previous to this game they had beaten Championship Wolves 1-0 at home in the FA Cup to set up a 4th Round tie at Norwich City. Therefore showing their cup credentials. Their Trophy campaign had seen them beat Dorchester Town after a replay before winning a tricky away tie at Matlock Town to set this game up against the Skem. Despite playing 3 levels lower than Luton in the Evo-Stik 1st Division North, Skelmersdale United are currently having a brilliant run and should (from the position they are in now) achieve promotion into the Northern Prem Prem for 2013/14. Losing only once in 2012 was impressive enough but their league campaign going into this game was played 17, won 15, drawn 2. They weren’t top of the table however, but only 4 points off first and with 6 games in hand means by the time they have caught up the Skem should be out of sight. 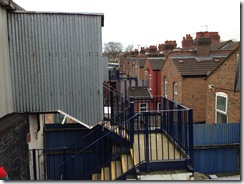 One of the things I have been looking forward to when coming to Luton has been the famous away end that is built into the row of houses on Oak Road. It’s one of the reasons why I haven’t come here for a game until now (although I did do a Football Snapshots post at Kenilworth Road back in 2010) as I wanted to stand in the away end with a team I can support. With my love for the Evo-Stik it was a no brainer. Stick on a Scouse accent and support the Skem. The away end is a strange one – Oak Road Stand being a former terrace that seating was stuck on. Therefore the leg room in the stand is shocking, however massive credit to the Luton stewards for allowing us to stand all game. Being on the back row of this stand is probably the best idea as the pitch is actually higher than the front row of seats. The rest of the ground does show its age, which is expected considering Luton have wanted to move to a new ground since 1955. The rest of the ground is a mix between the dilapidated and the old with the Main Stand mixing between the two. Running down one whole side of the pitch are the Executive Boxes with the Kenilworth Road Stand behind the other goal. While it is now an all-seater stadium, it is a shame that the home fans have no designated standing area – however if Luton see themselves as a Championship side then all-seater, sadly, is the way to go. 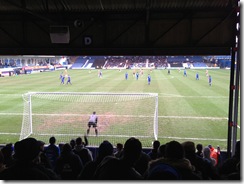 In games like this, the one thing you don’t want to see is for the massive underdog to have a dreadful start and concede a daft early goal. I felt that Skem actually started quite slowly and panicked a few times early on. This allowed Luton to create some good chances with James Dance having the first shot when he fired wide following a good run from him. Skem though settled and backed by 220 fans (+1 plastic) ex Lancaster City striker Mark Jackson fired a volley over and then bizarrely they hit the post direct from a corner. Luton reacted well however and should have really done better when some excellent link up play between Scott Rendell and Alex Lawless created a chance for Jake Howells at the back post, but he headed wide. While Skem were stubborn and beginning to frustrate Luton, they did have to defend a free kick on the edge of the area when Lawless was brought down. This came to nothing however and apart from one long range effort which was easily saved by Skem goalie Sam Ashton, the Evo-Stik side were well worth the 0-0 scoreline at half-time. 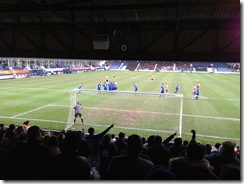 Luton clearly didn’t fancy a midweek replay in Lancashire and so brought on Andre Grey to try and provide them something new for the 2nd half. It looked a good decision early on too from Paul Buckle as Grey had two chances which saw one deflected wide as his pace clearly troubled the away defence. Skem though started to push a few more men forward as they were still clearly in this game and Jackson had a glorious chance in the penalty area from a corner but he scuffed his shot and it was easily saved by Dean Brill. With time ticking on and Luton fans worried they would have to locate Skelmersdale on a map to visit, they brought on Stuart Fleetwood and his presence caused Ashton to flap a cross and Grey fired the chance over. Luton were getting a little closer now as both sides began to leave more space across the field. Lawless managed to whip a cross in and Grey flicked on into a packed penalty box but before Luton could take advantage, Ashton had collected the ball. Skem had that golden chance on 83 minutes to make history as a chance at the back post was fired towards goal and Howell headed off the line and over as Brill looked beaten. From the corner though, it turned from dreams to disaster as Luton counter attacked through Fleetwood who found Adam Watkins on the right wing. He cut inside and fired a low shot towards the far post which beat Ashton who probably expected a shot towards the far post. Skem nearly had the audacity to grab an equaliser late on as Matty Hughes took advantage of a defensive mix up and while he lofted the ball over Brill, it just bounced wide. Now into injury time, Luton added an undeserved 2nd when they counter attacked again through Fleetwood who set up Grey to dink the ball over Ashton to send the Hatters through to the 4th Round. 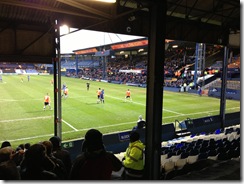 Skem deserved a replay from this as they held out well against a side three levels higher than them. The 220 roared their team off the field as despite the scoreline they were proud of that performance and putting the Evo-Stik on the map. Luton’s “reward” of winning that tie is an away trip to fellow promotion challengers Grimsby Town which could be good for the Trophy as two of arguably the stronger sides are meeting before the final. Despite the place probably having more atmosphere for a proper league game, it was still good to finally get to see a game at Kenilworth Road. A ground that is showing its age but still a decent place to watch football. Hopefully I’ll be back here next season with Morecambe, for a Football League game but good luck to both sides. I expect you’ll both be celebrating promotion at the end of the season.

- Programme: 6/10 (professional looking but not enough to warrant £2) 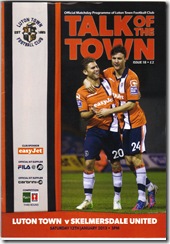 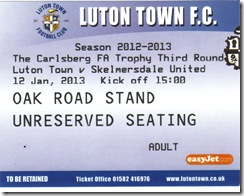