FA Cup 3rd Round day is one of those days that every football fan looks forward to. (Unless you’ve already been dumped out the Cup in the round before, cheers Coventry) This was the first 3rd Round day I would be spending in London so wanted to get to one of the many ties being played around the capital. Spurs v Coventry was the plan until it was sold out before I pulled my finger out and went for a ticket. No worries, it would be West Ham v Man Utd instead. When that was sold out too I had to scamper round and eventually plumped for Crystal Palace v Stoke – what a way to start 2013 on. 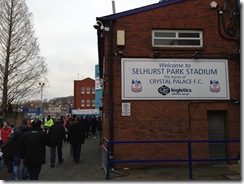 Crystal Palace is a residential area in south London named from the former local landmark, The Crystal Palace which occupied the area from 1850 to 1936. For centuries the area was occupied by the Great North Wood, an extensive area of natural oak forest that formed a wilderness close to the southern edge of the ever-expanding city of London. Local legend has it that Sir Francis Drake’s ship, the Golden Hind, had its timbers cut from trees in this area. The forest was a popular area for Londoners' recreation right up to the 19th century, when it began to be built over. It was also a haunt of Gypsies, with many local street names and pubs recording the link. The area still retains vestiges of woodland. The third quarter of the 19th Century brought the Crystal Palace and the railways. The Crystal Palace was a cast-iron and glass building originally erected in Hyde Park to house the Great Exhibition of 1851. Following the success of the exhibition, the palace was moved and reconstructed in 1854 in a modified and enlarged form in the grounds of the Penge Place estate at Sydenham Hill. The buildings housed the Crystal Palace School of Art, Science, and Literature and Crystal Palace School of Engineering. It attracted visitors for over seven decades. Today, the area still retains much of its impressive Victorian architecture, although housing styles are mixed, with Victorian terraces next to mid-war terraces side by side with blocks of modern flats. 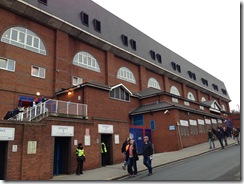 Crystal Palace FC was formed on 10 September 1905 by the builders of the The Crystal Palace under the guidance of Aston Villa assistant secretary Edmund Goodman and initially played its home games at The Crystal Palace. The club joined the Southern League in 1905 and won the 2nd Division at the first attempt to achieve promotion. At the outbreak of WW1, the club lost The Crystal Palace due to the Admiralty requisitioning it and so were forced to move to West Norwood FC. Playing then at The Nest, (formerly of Croydon Common FC) Palace joined the Football League in 1920 at Division 3 before moving to the purpose built Selhurst Park in 1924 playing in Division 2. Playing in the lower tiers of the FL for the first half of the 20th Century, Palace finally moved on up in 1961 and two more promotions in the 60s meant they started 1969/70 in Division 1. Despite surviving for four seasons, it suffered successive relegations before bouncing back and becoming the ultimate yo-yo club, which they have arguably have been ever since. Their biggest moment on the national stage came in the 1989/90 FA Cup when despite losing to them 9-0 earlier in the season, Palace beat Liverpool in the Semi-Final when Alan Pardew’s last minute winner in the replay earnt them a final against Man Utd. Which they promptly lost in a replay. Since then they have graced the top flight every now and again, most recently in 2004/05 when they were relegated on the last day as a result of West Brom’s great escape.

The club this season are looking to get back into the yo-yo routine again, having only done the drop part from their last relegation. They have been riding high for most of the campaign and even recovered from former manager Dougie Freedman leaving them for Bolton. In came Ian Holloway who is always an entertaining manager and his season in the Premier League also showed he wants his teams to play in an entertaining way. Palace have dropped a few points since he took over, probably as they got used to his system, but they still went into this game in 3rd place – 9 points behind Premier League bound Cardiff City but 7 into the play-offs. An exciting 2013 is to be in store for Palace you feel. They welcomed Stoke City for this FA Cup tie who despite the rumblings surrounding Tony Pulis were an established Premier League side now under him. Coming into this game in midtable, Stoke even recently had an article on BBC published about how they were playing some excellent football now rather than the long ball side they are known for. Having such players on their books like Kenwyne Jones and Matthew Etherington also amplifies the new approach to their game. 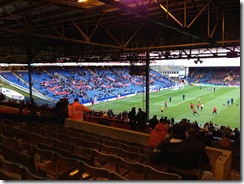 Getting to Selhurst Park relatively early (it’s simple for me to get to) and having a good wonder round the area, you can appreciate the history of the place being 89 years old. It has the old school, with the Arthur Wait Stand (the stand I was sat in) being still with shallow views and wooden seats and even older Main Stand. This is combined with the modern and the more recent Holmesdale Road Stand which was built in 1995. The large two tiered stand behind the goal is where the louder Palace fans sit and looks fairly good from what I saw. The ground is possibly one for concern with Crystal Palace looking to redevelop the Crystal Palace National Sports Centre and move in there, however local residents and Bromley council rejected these proposals so the plan seems to be dead. With the redevelopment of their current home the most likely option. Which is needed in some areas of the ground. 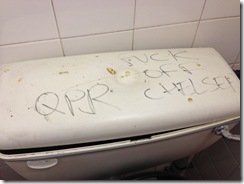 (Probably no room to include Charlton, Millwall or Brighton then)

I normally write a paragraph per half on a game, however I would be hard pushed to write anything about the whole 90 minutes of this one. It started off so well, Jermaine Easter cut inside and fired a shot that was well saved by Stoke goalie Thomas Sorensen. Then it started to break down in midfield as both sides showed far from their normal emphasis and passion. Stoke’s best chance of the match came just 10 minutes in when Peter Crouch misfired an easy chance wide from a couple of yards. The 2nd half was even worse as both sides continued to waste the few chances that were created in the game. Stoke had Kightly fire a shot over while Palace had Moritz, Jason Banton and Peter Ramage wasted theres. The 2nd half was so bad that the guys behind me gave up on watching the game and instead started taking pictures of the Stoke fans to have some fun with them later. Dreadful. 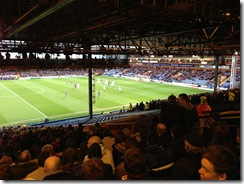 When you normally pick something or someone that isn’t first choice, it normally isn’t great. And this game proved that. 90 minutes devoid of any entertainment and ITV must have thought the same when the highlights lasted less than 30 seconds. The club were fairly friendly though and offered the new option to me of printing an e-ticket and bringing it to the match. The ground is one to visit, but try not to get a seat at the back of the Arthur Wait Stand as your view won’t be the best. The replay actually saw some goals as Stoke marched onto the 4th Round when they won 4-1 after extra time to set up a tie against Manchester City. Good luck to them for that, they might need it considering their current form…

- Value for money: 7/10 (fairly decent price for this round)

- Atmosphere: 8/10 (actually decent noise from both) 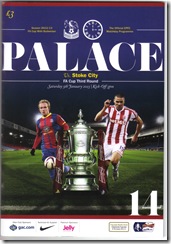 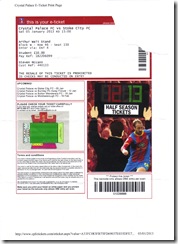