It had been a busy 2012 for me football wise. This was going to be game # 43 for me to cap it off. While I had been here there and everywhere in the quest to watch some crap football, I decided to end it with a short journey in London. In fact, one that involved me not even having to change tube lines. It was up on the Northern Line to leafy Finchley to see one of the Isthmian Premier League’s smaller clubs. 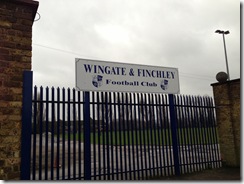 Finchley is a district of North London, in the London Borough of Barnet. Finchley probably means Finch's clearing or finches' clearing in late Anglo-Saxon. It is not recorded in the Domesday book, but by the 11th century its lands were already included in those of the Bishop of London and its name first recorded in the 13th century. A road north, later the Great North Road, was rerouted through the Bishop of London's estates at the end of the 13th century to pass through Finchley, and a small settlement developed in East Finchley during the following century. By the 16th century the Great North Road passed across Finchley Common, and by the 17th century there was a large hog market as well as a number of inns and other trades associated with transport in the period along its route. By the 18th century Finchley was well known for the quality of its hay, which was the dominant agricultural activity until the second half of the 19th century. The Edgware, Highgate and London Railway (later the Great Northern Railway) reached Finchley in 1867. The route ran from Finsbury Park via Finchley to Edgware and the High Barnet branch opened from Finchley in 1872. This in turn led to development of suburban houses, and a gradual increase in population which enabled Finchley to become a proper suburb of London by 1914. 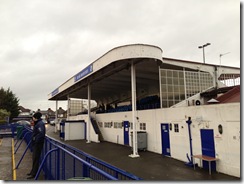 Wingate & Finchley were founded in 1991 as a result of the merger between Wingate FC and Finchley FC. (Who would have guessed that!) Wingate FC were formed in 1946 with the aim of fighting anti-semitism. They were originally based at Hall Lane in Hendon but named after Orde Wingate who had been involved in training the Haganah, the precursor to the Israeli Defense Forces. They were re-established in 1984 and were playing in the South Midlands League Premier when they joined with Finchley FC. Despite Finchley being higher, they took the place of Wingate’s place in the SML. Finchley FC were founded in 1874 and had spent time in the London League before joining Athenian League in 1912. After some decent FA Cup runs in the 40s and 50s, they joined the Isthmian League in 1973 and after becoming a yo-yo club and suffering financial problems, they entered into the merger. Playing at Finchley’s Summers Lane ground (but renamed Harry Abrahams Stadium after a long-term Wingate supporter) the new club ‘rejoined’ the Isthmian League in 1995 after a 2nd place finish in the SML. Some more yo-yoing between Divisions 1, 2 and 3 happened during the 90s – as well as a one season stint in the Southern League before 2009/10 where they finished 3rd in the league but lost to Enfield Town in the play-offs. They recovered from that in 2010/11 to win the play-offs and promotion to the Isthmian Premier when they defeated Brentwood Town in the final. A solid 13th place finish last season showed signs of promise to build on for the future. 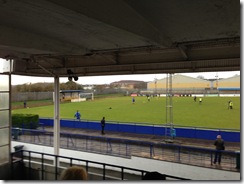 The Harry Abrahams Stadium is a quirky ground and considering how unkeen I was to visit here (I had put it off), I could not be more wrong. A fairly decent walk away from West Finchley tube station, the main entrance to the ground is quite welcoming and leads to small drive up to the ground. The main feature that instantly stands out is the grandstand that was built in 1930. An art deco structure with only two pillars of support so views can be good an mostly unobstructed. What makes the structure even more fascinating is the 2nd side on the back which allows the next door rugby club of Finchley RFC to use the stand as well for seating. The rest of the ground looks like a stand Isthmian League ground with a small area of covered standing facing opposite the grandstand called the Jack Fisk Stand. Behind one goal is a small covered standing area while opposite this is another terrace that is uncovered. The terracing at this ground is also unusual in that it’s all one small step that is quite narrow. If W&F were to get a large crowd again at this ground, then it may be uncomfortable and the views may not be that great – grab a seat in the stand! 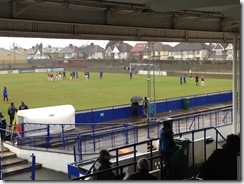 Despite being midtable last season, W&F have struggled this time out and were going into this game in 20th position, outside of the relegation zone by 1 point. They were also horribly out of form and hadn’t won a game since November 3rd against Kingstonian and hadn’t even scored a goal in 3 games. Reading on forums, some of their fans had started to look at teams in Isthmian Division 1 North to get a better idea of potential opponents for next season. Their opponents had recently made the national news for their FA Cup exploits in reaching Round 3 but were also having a mere in the league and sat one place higher than W&F. Since I watched their 1st Round win at Bishops Stortford, Hastings United then went on to knock Harrogate Town out on penalties in a replay. While they were looking forward to a trip to Middleborough, their league form had slumped and were right down there with W&F in a relegation battle. Since that FA Cup win I saw, the Arrows had played 6 and drawn 4 of them with 1 win and 1 defeat. 7 points out of 18 isn’t great form and that is why they were down there. With only a New Years Day game to come against Lewes, this was one of the final chances for Hastings to get ready for their trip to the NE. Or they could just rest players for those games to have everyone fully fit for that tie. 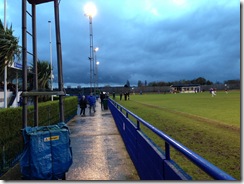 As the game kicked off, it was evidently clear what style of playing we would both be seeing in this game. W&F got up and at their opponents but lacked a bit of quality to put them under real pressure. Hastings on the other hand clearly were thinking about ‘Boro and looked like a team who were in a relegation battle. Hastings had a couple of shots from distance early on but home goalie Bobby Smith easily dealt with them. While W&F did have an Anthony Thomas shot that dragged just wide soon after, Hastings did continue to have more of the ball. After Bradley Goldberg fired over from a corner, the home side came back into it and had more of the play for the rest of the half. George Howard in the Hastings goal had to make some great saves from Scott Shulton and Andre Scarlett before making an outstanding save from a Thomas long range effort. While the half had got better (it couldn’t have got worse) as it went on, just before HT, W&F striker David Laird slid in and missed the ball, clipping a defender in the process. Sadly for Laird he had already been booked so W&F would play the whole 2nd half with 10 men. 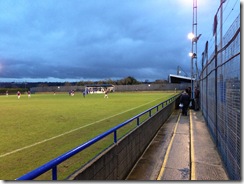 This man disadvantage didn’t seem to harm them however as they took the lead just 4 minutes into the 2nd half. On as a sub, Daniel Brown collected the ball midway in the Hastings half and ran at the defence before firing a shot from 20 yards that Howard should have saved but could only get a hand to it. While Hastings were lucky not to have a man sent off midway through the half when already booked Lee Carey mistimed a tackle, the man advantage started to count as they began to bombard the home goal. While W&F had made a good go of it to keep them out, an equalizer always looked likely and arrived on 76 minutes when Danny Ellis cut in from the left and curled the ball past Smith. Hastings were now well on top and although Smith did exceptionally well to keep out a shot from Jack Dixon, they did snatch a late goal (which everyone thought was the winner) on 85 minutes. For W&F to defend so well for the majority of the half, falling asleep to allow Dee Okojie to cross in for an unmarked Bailo Camara to head home was just frustrating. It looked like Hastings would snatch an important 3 points in their battle against the drop, but late on more controversy occurred when Josh Jirbandey was shown a straight red card for a professional foul despite most of the crowd thinking he took the ball. Clearly incensed, Hastings were not totally switched on and while they defended the subsequent free kick, the resulting corner was curled straight in by Shulton for W&F to grab a late and great equalizer. 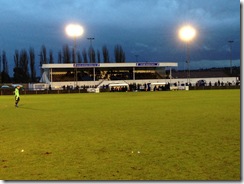 Hastings player/boss Sean Ray did himself and his side no favours in the aftermath of the game as he launched a verbal scathing of referee Andrew Parker when leaving the field. While Parker probably didn’t have a good game, calling him every name under the sun isn’t that clever and shows a complete lack of class. So much so that while the national media all wished Hastings luck at ‘Boro, I hoped they got an absolute pumping. Losing 4-1 is probably the scoreline they expected but more worryingly for them is that since this game they have played two more league matches, at home to Lewes and Wealdstone and have only picked up 2 points. Draws are killing them this season and as I write this, they sit 19th and only 1 point off relegation, albeit with 3 games in hand. W&F on the other hand have gone on a brilliant run since this match with wins over Wealdstone and Harrow Borough in the league before a cup win over Haringey Borough in the London Senior Cup. If they keep this up, a midtable finish will be fine. A really friendly club, I would recommend a visit and to see that great grandstand. Who knows what 2013 will bring, 2012 was (football watching wise) a great year.

- Programme: 6/10 (ok, but bonus points for getting info from their Boxing Day game in there) 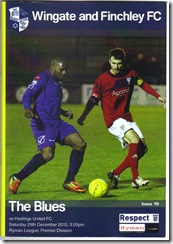