While it could have been easy to go with a bog-standard enchilada or fajita, the red mole sauce made this slightly different the usual bog standard Mexican. The red mole sauce being mainly chocolate and tomatoes. 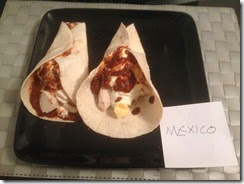 While the Brochettes with a Cameroon sauce is a simple skewer with beef and peppers, the plantains were an interesting for me. Is it a vegetable? Is it a banana in disguise? 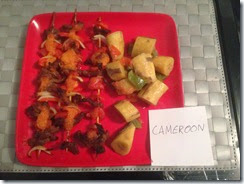 Verdict: Mexico were always going to look good here with Mexican being the king of food. Despite it being a disappointing meal (in part to my poor cooking), nothing could prepare me for Cameroon. The skewers were fine. Good solid marinade. But then came the plantain. Possibly the worst thing I have ever eaten. Looks like a banana but tastes of shame. Comfortable Mexico win.

The omelette is a classic and with a Spanish twist of chorizo to add even more depth to the dish. 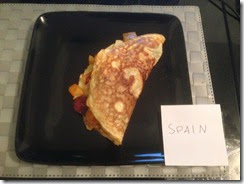 A bacon pancake with apple sauce is a Dutch classic (apparently) with the sauce meant to be a treacle based one for maximum coverage. 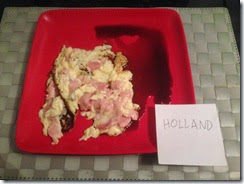 Verdict: Yes, that is a pancake. Maybe I have inadvertently created a metaphor for the Dutch World Cup campaign. A shambles. Even the apple sauce was too watery. Spain, solid and did the job. Like they should do for the game in Salvador. I made that Dutch dish back in February and it looks even worse now. Terrible.

A sexy dish of slow cooked pork, with a salsa sauce and finished off with some veg and rice. Early contender for dish of the tournament. 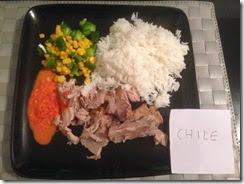 Aussies love their meat. And what more Australian meat is there than Kangaroo? (Maybe apart from Koala but that is hard to find in London) Make it into a burger and “stick it under the barbie” to make it proper Australian. 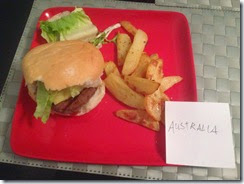 Verdict: If you’ve never had Kangaroo meat, there is really nothing wrong with it. Quite tender and a decent taste and it goes well with the Bush Tomato Chutney. However, when you put it against the might of that slow cooked pork and the salsa sauce, the sexyness comes through. Is Australia sexy? Are Kangaroos sexy? No to both.