When Morecambe had confirmed their place in League 2 for 2013/14, I began to look at the teams who were dropping down and coming up to take on the Shrimps for this season. One team that stood out like a sore thumb were Portsmouth who were about to complete their fall from grace. Luckily the fixture computer was kind to me and gave the Shrimps the long trip down south early on in the season. This was a no-brainer. 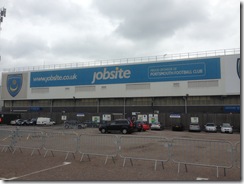 Portsmouth is the second largest city in the county of Hampshire on the south coast. There had been settlements in the area before Roman times, mostly being offshoots of Portchester, which was a Roman base. In the Domesday Book there is no mention of Portsmouth. However, settlements that were later to form part of Portsmouth are listed. In 1200, King John's desire to invade Normandy resulted in the establishment of Portsmouth as a permanent naval base, and soon afterward construction began on the first docks. During the thirteenth century Portsmouth was commonly used by Henry III and Edward I as a base for attacks against France. By the 14th century commercial interests had grown considerably. Common imports included wool, grain and wheat, however the port's largest trade was in wine from France. In May 1787 11 ships sailed from Portsmouth, to establish the first European colony in Australia; it also marked the beginning of prisoner transports to that continent. It is known today as the First Fleet in Australia. Portsmouth has a long history of supporting the Royal Navy logistically; leading to its importance in the development of the Industrial Revolution and at its height, the Dockyard was the largest industrial site in the world. After WW2, the severe bombings the city suffered meant a mass rebuilding job had to be undertaken but waves of new developments since then has brought the city well into the 21st Century. 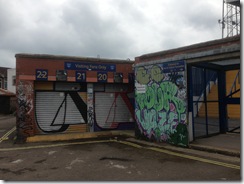 Portsmouth FC was founded in 1898 and quickly joined the Southern League a year later. Despite a mixed start of finishing runners up and then promptly relegated, they joined the Football League’s 3rd Division in 1920 and began to rise through the league and played 1st Division football in 1928. After some brushes with the FA Cup (including winning the trophy against Wolves in 1939) they took advantage of the local Royal Navy and Royal Marine players to become Champions of England in 1949 and 1950. The post war normality kicked in soon after and Pompey found their natural level in the lower leagues of the FL. In the 1970s, Pompey hit their first financial struggle after their owner John Deacon stopped bankrolling the club and they lurched through to the 90s overcoming a couple more bankruptcy threats. With Jim Smith in charge they nearly made the Premier League in 1992 but just missed out by one goal and another bankruptcy threat came in 1998. However with Milan Mandarić in control by 1999, the club began to spend and made the top flight in 2002. With it seemingly going well and more money being invested through Alexandre Gaydamak, the club won the FA Cup in 2008 and reached the UEFA Cup group stage in 2008/2009. However everyone could see how it would end, again and the club hit another financial meltdown and flew down the leagues as they came their closest yet to going bankrupt. After losing points in 3 out of the last 4 seasons, they start back in the basement, with new club ownership and hopefully, a lesson learnt. 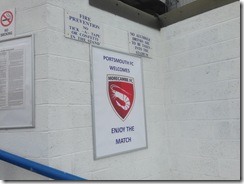 Fratton Park is a classic venue however that has been home to the club since 1898. It is dominated by the large Fratton End that stands behind one of the goals where the away end in (Milton End) is opposite it and is quite small in comparison. The Milton End only had a roof added in 2007 which finally removed another of the “away from home and getting drenched” experiences from the league. The other two stands in the North and South are fairly similar with both being small two tiered numbers that look to provide a decent view. With some artistic graffiti around the place and a number of decent pubs – this is great venue that will be used for the foreseeable future while Pompey get their finances in order and not spunk it all on trying to build a needless new ground. 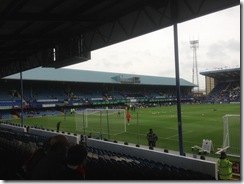 Their drop into the basement is probably a culture shock for the newer generations of Portsmouth fans and the minority of fans who thought it would be a walk in the park were also shocked as they came into this game with no wins. A 4-1 tonking by Oxford United was followed by an unlucky 2-2 draw against Accrington while their League Cup campaign lasted 1 game as Bournemouth saw them off. For Morecambe, it was also no league wins as a defeat at Wycombe and a draw against Torquay was sandwiched by a great 1-0 win over Wolves in the League Cup. With a massive test against a 5 figure crowd and a set of fans who most likely had never heard of us, this was one to look forward to. The game had also been made slightly tetchy by a ridiculous article by some tinpot local paper that mentioned and tried to suggest Morecambe would only be bringing 4 fans to the game. Completely ignoring the pay on the day factor and then the story made national news. 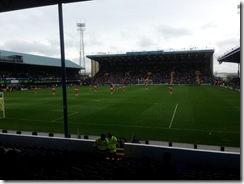 Myself included in the 113 Morecambe fans that did make the trip quickly watched on in horror as the game got away from the Shrimps by half-time. Playing a different formation with only 3 defenders and having Andreas Arestidou in goal (who provides me with fear quite honestly) we had an early scare when Jed Wallace was found alone at the back post and his shot hit Mark Hughes and rolled across the line before being cleared to safety. We were not playing well as Pompey brushed us aside but it didn’t help referee Darren Drysdale was also inept, booking Andy Wright for winning the ball in a tackle. (Pompey match report described it as ‘cynical’, laughable) Opening goal was always going to come and when Patrick Agyemang rolled the ball through a static defence, Wallace was on head to lift the ball past Arestidou to make it 1-0. This woke us up as we won a corner that had a massive hint of handball in it as we saw another goal, at the other end. Portsmouth broke through David Connolly and after Andy Barcham had his shot blocked, the ball fell kindly to Connolly to make it 2. I did wonder how it could get worse and when Barcham again went down like a sack of shit to get Andy Wright his 2nd yellow card, we knew it was going to be a long day. Connolly had a header brilliantly saved off the line by Arestidou but Agyemang made it 3-0 before HT when he had time on the edge of the area to curl a shot off the post and in. “The worst performance of the Jim Bentley era.” 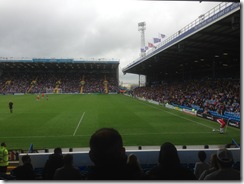 Morecambe reverted back to their normal back 4 for the 2nd half and surprise surprise played far better than the first 45 minute shambles. The Portsmouth match report makes it sound like they played like Brazil in the 2nd half and played with an “attacking mindset” but in all truth, nothing happened. We were far stronger and held a good shape while Portsmouth were clearly happy to keep it at 3-0 and created not that much. There was a spell in the final 10 minutes where we won a few corners and played ok but with Jack Sampson isolated upfront on his own, Paul Smith in the Pompey goal picked up his easiest clean sheet bonus ever. Damage done in the horror of the 1st half, but thankfully it didn’t get worse! 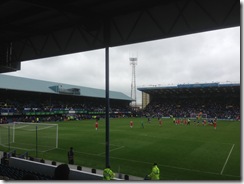 A Morecambe team missing Jack Redshaw and Kevin Ellison is a poorer one and this was proved in the next league game with Ellison coming back and scoring in the 2-0 win over Exeter. Another brave performance in the League Cup when we battered Newcastle but just couldn’t find the net as two late goals from the Geordies saw them through. With some key games coming up it remains to be seen what end of the table we are likely to be occupying. One of those coming up is at Southend where I will next be watching the Shrimps on another of their southern adventures in a few weeks. Portsmouth was an ok trip, despite the patronising nature of many of the fans, with Fratton Park a recommended ground to visit. I still think they will just miss out on automatic promotion this season as their away form needs to be sorted as they dropped more points in their next match with a 2-2 draw vs Mansfield. If Morecambe just play to their strengths in the return game in January then I’m confident we’ll win.

Photos from Portsmouth vs Morecambe

- Match: 4/10 (neither myself or the neutral would have enjoyed this) 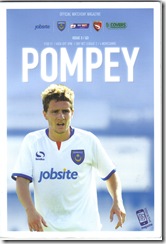