Competition: Capital One Cup 1st Round

In one of my moments of madness last season, I went to watch Coventry City vs Leyton Orient in the league. There I witnessed one of the worst games of football I had seen as Orient grinded out a 1-0 win. Fast forward 4 months and when Coventry were sent to Orient in the League Cup 1st Round, myself and my new flatmate were keen for another 90 minutes of misery. I’m a sucker for punishment. 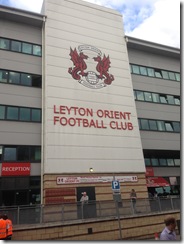 Leyton is an area of east London and part of the London Borough of Waltham Forest, located 6.2 miles north-east of Charing Cross. Paleolithic implements and fossil bones show that early man hunted in Leyton and a Roman cemetery and the foundations of a Roman villa have been found here. The name means "settlement (tun) on the River Lea" and was also known until 1921 as "Low Leyton". In the Domesday Book, the name is rendered as Leintun. at which time the population was 43. In WW1, the area was damaged by Zeppelin raids, but by the 1920s, it had become a built-up and thriving urban industrial area known for manufacturing neckties and for its Thermos factory. During the Blitz of WW2, Leyton suffered as a target because of its proximity to the London Docks and Temple Mills rail yard. After WW2, Leyton suffered from large-scale industrial decline in the second half of the 20th century. But, like much of east London, Leyton, which also borders the Olympic Park, has benefited from significant regeneration projects over the past decade. Parks have been spruced up, some new small parks and gardens created and several tower blocks have been demolished. And, most recently, in the build-up to the Olympics, Waltham Forest Borough Council restored shopfronts on Leyton High Road which was close to the 2012 London Olympic Games site. 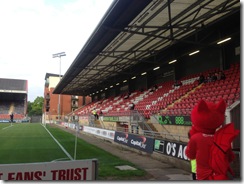 Leyton Orient was originally formed by members of the Glyn Cricket Club in 1881, many of whom were former students of Homerton College. The team has had several name changes since, first as Eagle Cricket Club in 1886 then as Orient Football Club in 1888. The O's are the second-oldest league club in London behind Fulham and are the 24th oldest club currently playing in the Football League. They played in the 2nd Division of the Southern Federation's League in 1904, joining the Football League in 1905. History was made on Saturday 30 April 1921 when the Prince of Wales, later to become King Edward VIII, visited Millfields Road to see the O's play Notts County. Orient won 3–0 and this was the first time a member of royalty had attended a Football League match. The royal visit was to show gratitude for Orient's patriotic example during the Great War where 41 members of staff signed up. Orient's golden years were in the 60s and 70s. In the 1961/62 season Orient were promoted to the top tier of English football, for the only time in their history. The team struggled in the top flight and were relegated from the top division the following season. Nonetheless, they did defeat local rivals West Ham United at home. They spent the whole of the 1970s in Division Two. 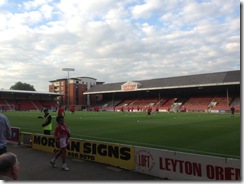 In the 1980s Leyton Orient fared less well, and after two relegations found themselves in the fourth tier of English football. However, they ended the decade on a high, as they were promoted in the 1988/89 season. The early 1990s saw steady progress in the Third Division, missing out on a play-off place in the 1992/93 season on goal difference. However, the financial crisis at the club caused by then-chairman Tony Wood losing his business in the Rwandan Civil War led to a relegation back to the fourth tier. Under manager Tommy Taylor, Orient were defeated in the 1999 and 2001 Third Division Play-Off Finals. They finally won promotion to League 1 in 2005/06 with the famous do or die game against Oxford United when a late winner, sent the O’s up and the U’s down. They’ve since stayed at League 1 level where they have either just missed out on the play-offs or have been fighting relegation. Don’t do the middleground this club! 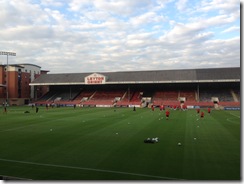 Brisbane Road is actually one of the grounds, especially in London, that I wish I’d made the effort to see earlier. A short walk from Leyton tube station, the ground is dominated by the new large West Stand with the shiny entrance and supporter’s club bar. The West Stand seats offer a great view already, but you can pay more to sit on the balcony and probably get an even better view of the game. The stand opposite is the classic side to the stadium with the old East Stand. With wooden seats and the old style entrance on the outside, this is a great contrast to the stand opposite. It was shut for this game, although both stands behind the goals were open as Coventry had brought an impressive 400 odd down for this game. Finally, the great feature at Brisbane Road is the blocks of flats in every corner of the ground. With balconies overlooking the pitch, it means the owners can have a free ticket in with some beer (as some residents did) while I presume the sale of the land and flats brought in Orient a fair bit of money. Wins all round. 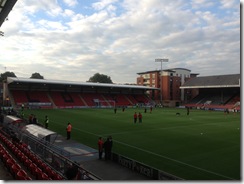 Orient had just missed out on the play-offs last season and despite being (normally) slow starters they had opened the season with a comprehensive 5-1 win at hapless Carlisle. Despite all of Coventry’s problems they nearly started with an instant fightback into the points deduction, but lost out to a late goal in their opening game with a 3-2 defeat at Crawley Town. Cov fans were discussing on their main forum the bizarre (but understandable) thinking that they would rather lose this game only for current owners SISU not to get money from a good cup run. With Orient in seemingly brilliant form and Coventry just trying to survive, this looked like only going one way. Didn’t it? 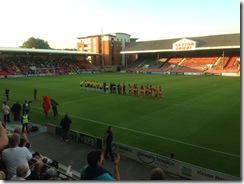 Orient must have also thought this way too as their early performance seemed to suggest that they believed if they turned up, that would be enough. Coventry, driven on by Steven Pressley from the touchline were chasing down every ball and harassing Orient into making lots of early mistakes. Coventry were also creating chances too with Carl Baker destroying Gary Sawyer time and time again. A ball in from the right nearly gave Cov the lead early on with Orient captain Scott Cuthbert diverting it towards his own net, only to be saved by Jamie Jones. The Orient goalie had to save his team again when a delightful throughball from Callum Wilson set up Franck Moussa, but his shot was fired against Jones’ legs. Coventry were well on top however so it was no surprise to see them take the lead on 22 minutes. A long punt upfield from Joe Murphy found Baker vs Sawyer. With only one winner, Baker beat his man twice and curled the ball into the bottom corner. It was what Coventry deserved but with a young and inexperienced team, they quickly switched off and paid for it. Lloyd James’ cross was met by Romain Vincelot who forced a great save from Murphy. However the away defence sat and watched Kevin Lisbie fire the ball into the bottom corner. Cov’s defence were a shambles 11 minutes later too and a poor free kick was barely cleared and Dean Cox fired past Murphy to give Orient a barely deserved lead at HT. 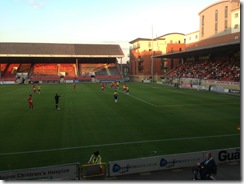 The 2nd half looked to be as good as the first when both sides missed early chances as James and Clarke swopped chances. However, then the turning point came on 55 minutes. Baker and Vincelot both went for a 50-50 challenge which in my eyes Baker won and took the ball. However, Vincelot rolled around like a sack of shite until referee Dean Whitestone sent Baker off and the home player made a sudden recovery. While most expected Cov to be killed off now, they used the red card to show a lot of passion and bang an unlikely equaliser in. With Cox also rolling around on the floor, Cov played on and and Moussa was put through on goal and smashed the ball into the bottom corner. Karma. Cov were well on top as Orient seemed to not be able to deal with the away side and should have won the game late on. A long ball forward saw Clarke and Cuthbert grappling and with Clarke getting past him, the Orient captain took him out. It was a clear cut penalty but Whitestone got another key decision wrong by only showing the Orient player a yellow card. Clarke himself stepped up to take the penalty but it was well saved by Jones. This seemed to galvanise Orient into one final push for the last 10 minutes as they wanted to avoid ET. They got the winner really late on when a deep ball in from Moses Odubajo was met by Lisbie whose diving header was unsaveable. Sad for Coventry as they deserved ET at least. 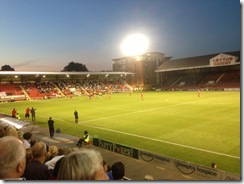 Considering how poor the reverse game was last season, this was a brilliant 90 minutes of football. It’s a shame we didn’t get ET as that would have no doubt been a great watch as well. Orient’s win meant they earnt a 2nd Round tie at home to Premiership Hull City. With Orient starting well in the league, they will fancy their chances against the Tigers as they currently sit top of the league on 9 points after wins against Shrewsbury and Stevenage. Coventry are also getting stuck into their 10 point deduction to try and not be left behind with an outrageous 5-4 win over Bristol City and a 4-0 hammering over League 2 bound Carlisle means they are only 4 points behind already. If they show the same fight they showed in this cup tie throughout the season, they’ll be fine. Brisbane Road is a fine ground and leaves me with only 2 more professional venues left in London to visit. I’ll be back at the Orient though – a great club.

- Value for money: 6/10 (have had cheaper League Cup tickets) 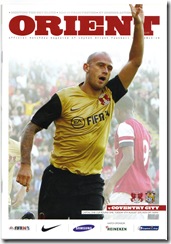 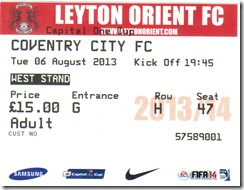