Appledore, Blyth Spartans, Truro City and Boreham Wood. Since writing the blog these are the grounds that I have kicked my season off at for reason or another. Now 2013/14 was kicking off I was after a friendly that I could be interested in rather than pay to watch a kickabout. Enter Villarreal. My Spanish boys were over for one pre-season game at Brighton. Friendly found. 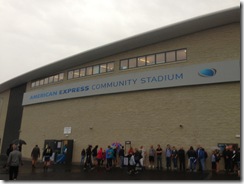 Brighton is a major part of the city of Brighton & Hove and is part of the ceremonial county of East Sussex. In the Domesday Book, Brighton was called Bristelmestune but was then burnt to the ground by French raiders in 1514. From 1780, development of the Georgian terraces had started and the fishing village became the fashionable resort of Brighton. Growth of the town was further encouraged by the patronage of the Prince Regent after his first visit in 1783. The arrival of the London and Brighton Railway in 1841 brought Brighton within the reach of day-trippers from London and population growth from around 7,000 in 1801 to over 120,000 by 1901. Many of the major attractions were built during the Victorian era such as the Grand Hotel (1864), the West Pier (1866) and the Palace Pier (1899). More recently, gentrification of Brighton has seen a return of the fashionable image which characterised the growth of the Regency period. Recent housing in the North Laine, for instance, has been designed in keeping with the area and the overall image of “London-by-the-sea”. 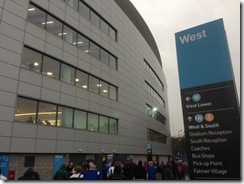 Brighton & Hove Albion FC in the words of a famous Fatboy Slim (who is from the area) song, “have come a long long way together.” Founded in 1901, they later became founding members of the new Football League 3rd Division in 1920. Having floated around the bottom leagues for some time, Mike Bamber became Chairman in 1972 and after Brian Clough flopped at the club, brought Alan Mullery to manage who took them up to the 1st Division in 1979. Inconsistencies hit them during their time in the top flight and were promptly relegated in 1983, where they haven’t returned since. That season they also reached the FA Cup Final but after a 2-2 draw in the first game (“and Smith must score!”) they lost the replay 4-0. Debts mounted up and in 1996 a decision was made to sell the Goldstone Ground, home since 1901. The 1996/97 season was a disaster for Albion on the pitch too as they needed a last day ‘do or die’ game against Hereford United to stay up on goal difference. Had they gone down, the club may well have died. After a couple of season groundsharing at Gillingham, they returned home (sort of) to the Withdean Stadium. 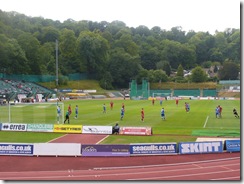 Voted “4th worst ground in English football” in the Observer in 2004, the part athletics ground, part zoo (which closed in 1955) never was a hit but at least the club started to push on after their financial difficulties. Champions of Division 3 and Division 2 in successive seasons in 2002, they have stayed in between Level 2 and 3 since. After dropping back to League 1 in 2006 and defending themselves from relegation, just, Gus Poyet came in and took the club back up to the Championship. Instead of consolidating though, he kept up the push with a 10th place finish before last season finishing 4th and a play-off place. However, “shitgate” and a semi-final defeat to Crystal Palace ended their chances and in the summer Poyet was sacked too after “gross misconduct”. 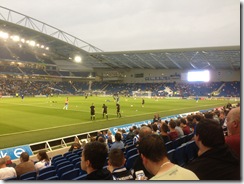 It means this coming season sees a brave new start for Brighton under the management of new boss Óscar García. Oscar coming fresh from winning the Israeli Premier League with Maccabi Tel Aviv has promised “exciting attacking football” and his time with Barcelona means he will have been taught well. My dark horses for the Championship this season, purely because of the unknown Oscar factor, Brighton may well be one to watch. In town were a team also about to have a fresh start were Villarreal. My Spanish boys since I enjoyed them punting Celtic out of the UEFA Cup in 2003/04 and their Champions League run to the semi-finals in 2005/06. After a shock relegation two seasons ago, they found an outstanding run of form late on in Segunda División to finish 2nd and bounce straight back to La Liga for this upcoming season. With some canny signings made, Villarreal will hopefully (!!) not struggle again this season and could even battle for a cheeky Europa League spot. 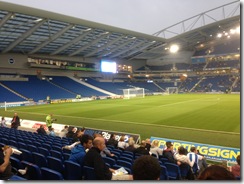 The Amex Stadium was opened in 2011 after years of legal battles and enquiries. Noticeable when driving past it on the A23, the structure stands out in the Sussex countryside near the small village of Falmer. Better than most of the new builds, the two larger stands of the East and West dominate the ground with multiple tiers. Two lower stands are situated behind the goals that are shallower to allow the ground to “blend into the Sussex countryside”. With padded seats and great views throughout the ground, the Amex is one I would really recommend to visit. Even in the pouring rain, you felt comfortable without feeling like you were in some corporate plastic shitebowl (hi Ricoh Arena!) and with a full capacity, this place would be rocking. 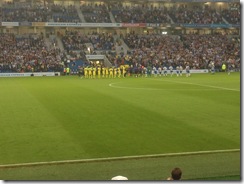 The game kicked off late due to apparent ticketing issues (the “away fans” were all moved to the East Stand for example as they had sold few too tickets to keep it open) but most likely because Villarreal had turned up late. The first few minutes went by and it was clear they were still on the team bus as they went a goal down within 120 seconds. A long punt upfield allowed Leonardo Ulloa to win a header and put Ashley Barnes through on goal and he smashed a half volley past Sergio Asenjo to give the Seagulls the lead. While Villarreal finally got some time on the ball and Cani fired a low shot that Tomasz Kuszczak saved well, their defence looked extremely shaky. It could (and should) have been 2-0 a wee bit later as the Yellow Submarine’s offside trap wasn’t even straight and Andrea Orlandi was denied by Asenjo with a 1 on 1 chance. As the game went on though, it was the away side who started to look more likely to grab goals with some classy passing and excellent movement. Hernán Pérez forced Kuszczak into a brilliant save with a long range effort around the 30 minute mark before Jonathan Pereira hit the bar from the resulting corner. Bruno Soriano was then denied by Kuszczak before Villarreal got their deserved equaliser on 40 minutes when Cani’s low drive slotted right into the bottom corner. Just rewards as they had improved throughout the half. 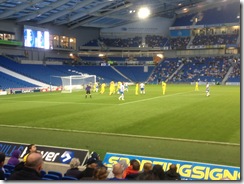 The 2nd half started with both sides changing into their away kits, strange. So Brighton who had started the half in white and blue were now in yellow and Villarreal who started the half in yellow were now in blue. Go figure. As with pre-season friendlies both sides made a few subs so everyone got a run out, but Villarreal brought on a few youngsters who seemed to be hungry to impress. As a result, the slick pace to the game dropped somewhat but Manuel Trigueros fired a tame shot wide on 64 minutes. Just two minutes later the away side had the lead with an early contender for goal of the season. Slick counter attacking saw Pereira faced with two defenders on the edge of the area but played a great through ball into the path of Jérémy Perbet. Instead of trying to score himself, Perbet then flicked the ball behind him where Pereira had continued his run and he fired the ball into the roof of the net as Brighton stood watching, astounded. A quite brilliant goal. The 3rd that Villarreal killed the game off with was much simpler. Javier Aquino burst down the right and his ball across goal was fired in by Pedro Rios. With the result finished, the game fizzled out for the final few moments as it seemed to be a good workout for both sides. A decent, albeit very wet (hopefully not a sign) start to the season for me then! It was a pleasure to watch Villarreal, not just for being bias but to watch the passing and movement off the ball that this country just can’t seem to grasp. Hard work and power is one thing but if you can’t get the ball then that is useless. The Amex Stadium will probably win my end of season award for best professional ground I visited, it was that good. It will be interesting to see how both sides get on during the season but those friendly haters missed an entertaining game here. Hopefully the start of things to come for 2013/14!

- Value for money: 6/10 (ok for a PSF, considering what some clubs charged for their’s)

- Ground: 8/10 (probable winner of best professional ground of the season)

- Programme: 5/10 (only half related to this game, reasonable) 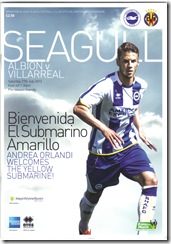