While I was still waiting for the football season to kick off, rugby league was taking advantage of the glorious weather being the summer sport. One game I had wanted to see since moving to London in 2011 was the Heed come down and play London Skolars, usually the two whipping boys of Championship 1. Since the league has changed when I saw the reverse fixture last season, both sides have kicked on slightly and after an outrageous 55-52 reverse just a few weeks earlier, this could be great. 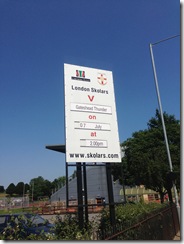 The Skolars were founded during the centenary season of the Rugby Football League in 1995, initially as a club for post-grads in London but then opened up to all later. They achieved success in the London League before becoming founder members of the Southern Conference in 1997, the forerunner to the RFL Summer Conference. By also joining the BARLA National Conference, they were a club that played in both summer and winter leagues for 4 consecutive seasons. National competitions kicked off in 2002 as they became the first club in 80 years to rise up from the amateur ranks to the professional leagues. They have found the National Championship tough going at times finishing around the bottom of the league for consecutive seasons. However, the club have worked hard to improve and finished 7th last season, just 2 points off a play-off place. 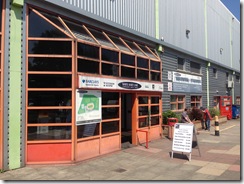 The Skolars play at the White Hart Lane Community Sports Centre (also known as New River Stadium) which is short walk from Wood Green tube station. The comparisons between themselves and Gateshead in league performance is clear, however the New River Stadium also bares some similarities to the Gateshead International Stadium (albeit much smaller). One main stand that also holds the club bar, and the walk up to the top of the stand so the seats provide a decent view of the pitch. There are also uncovered standing areas that are at times open to fans if a large crowd is there. (Not this game, look at the attendance) It does the job for the Skolars and although a running track means you are quite far away from the action, the home fans have a good group that tries to get the atmosphere going. Being rugby league, the relaxed atmosphere regarding alcohol was also appreciated. Watching the game with a cool pint of Kingstone Press Cider (sponsor check!) in this heat was quality. 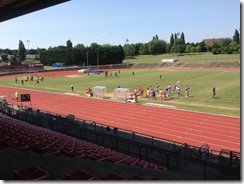 Championship 1 is a very different place to when I last saw it, with new teams in the form of Hemel Stags, Oxford RLFC and Gloucestershire All Golds. Thunder were used to propping up the table, but had a 3 point lead over the All Golds at the foot of the table. This was helped by the 4 bonus points Thunder had picked up compared to Gloucestershire’s 1. Skolars were also going well and challenging for a playoff place in 6th, but only 2 points off 3rd. After the defensive shambles from both sides a few weeks earlier, this game was going to be tight it seemed and Thunder were wanting to pick up their 1st away league win in 4 years. 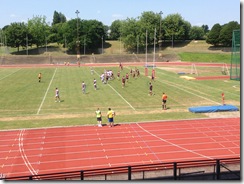 In the glorious sunshine, the match kicked off and immediately looked a more competitive match than I saw last year. Both sides’ defences were slightly shaky but the 55-52 scoreline from a few weeks previous looked unlikely to be repeated. Skolars were putting pressure on in their sets but Thunder held on well in defence. That changed after 5 minutes when a long kick on 5th tackle from Andy McLean bounced and allowed Mike Bishay to open the scoring. Thunder were still well in the game though and equalised 5 minutes later when Dylan Skee sent across a hospital pass and Ben Hardcastle easily intercepted it to go over. Thunder then had the audacity to take the lead as the Skolars defence parted like the seas when Danny Nicholas ran at them but the lead lasted just 3 minutes as they couldn’t handle Skolars winger Ade Adebisi who scored in the corner. It was a fast paced game although with the heat, everyone knew the 2nd half would see the pace drop, but unless one team fell away you couldn’t tell who would win this. 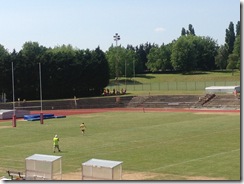 One team did fall away however as Gateshead’s hard defensive work in the 1st half disappeared as Skolars scored 4 times in 14 minutes to take the game and even bonus point away from them. Skee’s kick to open the half blasted off Jason Payne and Skee finished off a move to start the blitz. Skolars’ other 3 tries were just simple passing in their sets that Thunder couldn’t live with as it seemed the heat had taken it out of them in the 1st half. Now 34-12 down, Thunder did threaten a fightback with two quick tries of their own. Firstly Omari Caro above a dreadful Smokie Junor jump to score in the corner before Hardcastle got his 2nd of the game just 2 minutes later to send Thunder back into bonus point territory. Skolars killed that however as they scored another 3 unanswered tries late on as they pulled the away defence around with some more easy passing. As the hooter sounded there was some handbags (as there always seems to be when these two meet) over a late challenge but Skolars had won for the 4th time in a row, the first time they had achieved this since they joined the professional leagues. 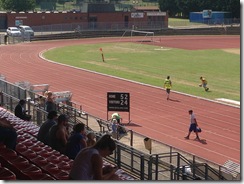 Skolars after years of struggle on the pitch are finally beginning to move forward and are well placed for a play-off challenge this season. Despite a Northern Rail Challenge Bowl Final defeat to North Wales Crusaders, they made it 5 wins in a row in the league with a 35-28 win at Gloucestershire All Golds which put them in 3rd place in the league. Thunder are also slowly improving after having to start from scratch a few years ago. They are 2nd bottom in 8th but after this match won their first away game in 4 years with a 36-30 win at South Wales Scorpions. New River Stadium is a nice venue, especially on a summers day to watch rugby league. With the league structure in RL soon about to change yet again, who knows what kind of level of RL this venue will be hosting in the future.

Photos from Skolars vs Thunder 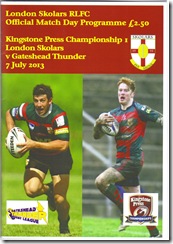 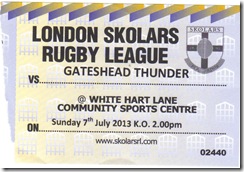