The start of my season had so far featured only professional grounds and clubs so it needed to be brought back down to the proper gritty non-league stuff. Needing to stay local I decided to look around my new area of Middlesex for a game and there was nearby Rayners Lane of the Hellenic League playing at home. I’m not sure why a league for clubs mainly from Berkshire, Oxfordshire and Gloucestershire has a team in London Zone 5, but I was to find out. 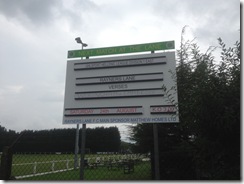 Rayners Lane is a suburban district in the London Borough of Harrow in northwest London between Pinner and West Harrow. It built up during the Middle Ages as the Rayners Lane road was used when transporting grain to the mill on Pinner Green. During the first half of the nineteenth century the area was in the hands of the Rayner family, who owned a farm. The area was drastically built up again between 1929 and 1938 by Harrow's biggest interwar housebuilder T.F. Nash, who created a shopping parade on Alexandra Avenue. The area is most widely known as the location of Rayners Lane tube station, first built in 1906, and most of the settlement is built around the tube station. The station links both the Metropolitan and Piccadilly lines and therefore has good connections with the rest of London. The other principal point of architectural interest is the former cinema, an Art Deco building featuring a curved projection on the front somewhat resembling an elephant's trunk and is a listed building. It is currently being occupied by the Zoroastrian Trust Funds of Europe, and is used as a Zoroastrian centre - the only official temple of its type in the UK. 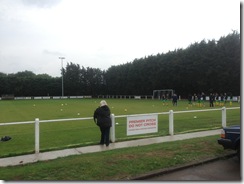 Rayners Lane FC have the fairly modern founding date of 1933 starting out in the Harrow, Wembley and District League. The Tithe Farm Social Club was formed and the football club was absorbed into it where they have played ever since. Their early days saw some success as they picked up three league titles and three league cups as well as the Middlesex Junior Cup in 1943. They moved forward after the war into the Spartan League but found it a struggle and failed to gain re-election in 1970/71. This led them to the Hellenic League which they joined in 1978 and promotion to the Hellenic Premier in 1983 saw them play top flight football in that league until they hit some struggles in 1994/95. With strict standards they were forced to drop back to the Middlesex League before joining the Chiltonian League in 1997/98. When that merged with the Hellenic League, the Lane found themselves in the new Division 1 East where they have normally finished in the top half of the table. Last season saw them win the division by 4 points, however due to failing ground grading rules the Lane were kept at this level while 5th place Bracknell Town went up instead. 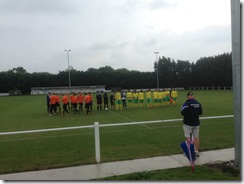 For this season then, Rayners Lane are all change as a large chunk of their title winning squad and manager Dene Gardner left for “differing ambitions”. In has come new boss Mick Bradshaw and a whole host of new players as the Lane try to retain their title. They had made an ok start too after 3 games with winning 2 and losing one, to Maidenhead United Reserves. With the team and manager still learning about each other, you can suspect the Lane will improve as the season goes on. Their opponents were also playing in a league lower than they want to this season as Wokingham & Emmbrook had finished 8th (out of 20) in last season’s Hellenic Premier but had taken voluntary demotion to regroup. Having to play all of their early season fixtures away from home, the Sumas had lost their opening 2, conceding 11 and scoring just 4. The Lane were favourites for this game but the Sumas did finish in the top half of a league higher last season so you could never tell. 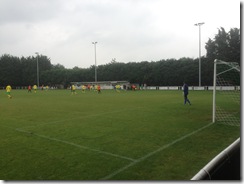 Tithe Farm is nice little ground that needs only a little bit of work here and there to get it up to Hellenic Premier standards. A short walk away from RL tube station, it has hard standing on at least 3 of the 4 sides (the 4th was just far too muddy for me to walk round to) with a small covered stand with both standing areas and seats across on the far side. Considering this ground is in London (albeit in Zone 5), the trees and quiet nature of the place does make you forget where it is. Considering I only have seen Ascot United in this league for comparison, I am a bit surprised this ground isn’t apparently good enough for Level 9 and FA Competitions, but there you go. A lovely place to spend a Saturday afternoon, even in the rain. 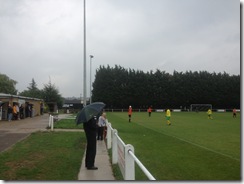 The game kicked off under some drizzle with Rayners Lane looking like the team who hadn’t lost every game they had played this season with some good early pressure against the Wokingham defence. A good counter-attacking opportunity came after just 5 minutes when Julian Smith and Jamel Mattan were both too fast for the away team but Mattan just stuck his shot wide. It was an open game as Rayners Lane did create a few more chances but entertainment was quite low as Wokingham were just trying to hang on in there. Richard John picked up a silly yellow card for kicking the ball away midway through the half but most of the good action came right at the end. Firstly a Paul Leslie free kick missed everyone and just went wide while Wokingham nearly got a nosebleed going up the other end but should have scored from a corner as a free header went wide. Lots of effort in the 1st half but not a lot of quality. 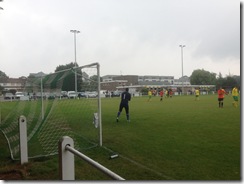 I’ve written this many times before in match reports and I’ll no doubt write it again but when you see a team dominate so much without scoring you can always see what will happen. It doesn’t happen in such spectacular style however. Rayners Lane had a corner pumped in and it was cleared off the line, down went Wokingham on the counter attack and Jake Butler cut into the area before firing past Andy Caesar. Their hardy band of fans went ballistic as they had offered very little for 60 minutes but now had the lead. It got worse for Rayners Lane too as just 6 minutes later they imploded from another corner. After playing a daft short corner, Lane lost the ball and Richard John had to lunge for the ball and caught the Wokingham player. When the ball broke down again, the referee went back and sent off the player to leave Lane right up against it. They even managed to fall asleep again at the back as Wokingham played some nice stuff on the left hand side before whipping a ball in which found Elliot Rushforth all alone to easily divert the ball past Caesar to gave the away side a scarcely believable 2-0 lead. You still thought though that Rayners Lane could still get something out of this and were awarded a way back in the game on 80 minutes. A lucky break in the area saw the ball fall nicely for Mattan and while he fired the shot over the bar, Wokingham goalie Ashley Withers took him out and play was brought back. Even the home fans were laughing at the decision but Lane captain Callum McCarroll stepped up and slotted the penalty into the bottom corner. Expecting now a battering, Lane did step it up but didn’t really create many chances to trouble Withers. In fact as Lane pushed forward Wokingham hit them on the counter attack again as a player was barged over in the area and late in the 6 minutes of injury time Khalid Sensussi scored the penalty to give Wokingham the points. 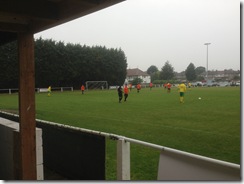 For my first non-league game of the season this was ok but did take a whole half to get going. At HT I did think Rayners Lane would comfortably see the match out but Wokingham did deserve their victory. Bringing a good following, although they do need to stop appealing for every decision that goes against them, it’s not a conspiracy, they look like they might be up there at the end of the season. Form isn’t on their side currently though as a 4-2 defeat at Burnham Reserves means they are down in 12th. Rayners Lane boss Mick Bradshaw admitted after the match that it could take until Christmas to get his team sorted and their patchy form continued with a 1-1 draw at home to Headington Amateurs. Tithe Farm is a lovely place to go, although with some stories about some shocking Hellenic League grounds out there, I’ll be cautious before jumping in to do more of this league. 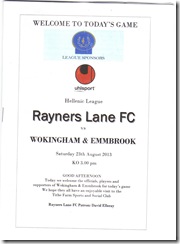