Normally, by this time of the year my season has long finished and I’m plotting what tinpot towns to visit in my next instalment. However, this was an extended season for me and being back up in Scotland meant I could finally take in a Scottish Juniors game. Trawling through the fixtures the one that stood out was the mighty Pumpherston, who I tried to visit back in March. Grabbing my chance to go on a vaguely warm evening, it was off to Pumphy. 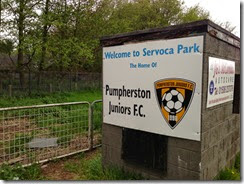 Pumpherston is a small dormitory village in West Lothian that was originally a small industrial village to the nearby shale mine. The most likely origin of the name of the town comes from the derivation, 'ap Humphrey', meaning son of Humphrey. Pomphray was probably one of the Flemish noblemen invited by King David I to settle in Scotland in the twelfth century. “Pomphray would have been granted the lands north of the Almond in return for serving the king in battle and would have grown up a little settlement and farm to house and feed his adherents and servants - Pomphray's town.” Today it now adjoins the town of Livingston which has grown far bigger than Pumpherston. 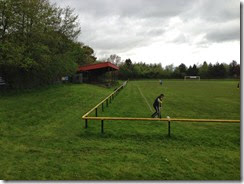 The original Pumpherston FC were formed in 1896 and played through the years in the Junior leagues before folding in 1977. The old club did reach the final of the Scottish Junior Cup in 1958 but lost 2-0 to Shotts Bon Accord. The “new” club reformed in 1990 and began plugging away in Division 2 but took 11 years to be promoted up to Division 1. In 2006, the SJFA restructured the leagues and Pumphy found themselves in the East Region South Division where they still play today. A few seasons ago, the club looked in real danger of folding again through a lack of volunteers but support has come back and the club now look to be on the up again. Recreation Park (or Servoca Park for sponsorship purposes) is a smashing place to watch football. With grass banking around the pitch and a large covered area that probably hasn’t been changed since it was first erected. I’ve been told its a typical Scottish Juniors venue and one that needs to be visited on a nice day! 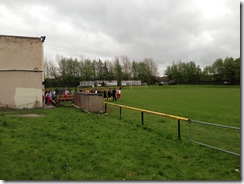 The SJFA have restructured leagues again (as have the SFA in the Seniors) for next season and so the South Division had a fair few promotion spots up for grabs. This had led to a decent battle going on for one of the Top 4 spots and the chance to play in the East Region Premier League next season. Pumpherston were going into this game in 5th place on 42 points and 9 behind Haddington Athletic. However, as Pumphy had a fair chunk of their games wiped out, they still had 6 to play and 4 games in hand on Armiston Rangers and Livington United who were in 3rd and 4th place respectively. In toon for this game were the Champions as Fauldhouse United had wrapped the title and the promotion spot up in their previous game with a 3-1 win over Whitburn Juniors. With the Hoose having nothing to play for but pride, it was up to Pumpherston to push on and try and make a game of this. 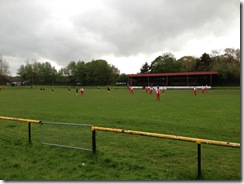 After the nice touch of a guard of honour to welcome Fauldhouse onto the field, the game kicked off and it was the good old Junior way I’d been told about. Tough tackles, some nice play and a lot of swearing. Probably not helped by the referee looking about 12 years old. Despite Pumpherston having more to play for, Fauldhouse caused the early pressure with a few free kicks as Pumpherston playing 3 times a week was clear to see. While an early Gary Shanks volley over the bar promised signs of a good game, it wasn’t. Pumpherston didn’t have the fitness to sustain any meaningful attack and they had their goalie Mark Reid to thank for saving a one on one. Brilliantly Fauldhouse tried to claim handball outside the area for this which was met with a cry from a Pumphy fan of, “handball!? He’s the fucking goalie!” Fauldhouse had another two decent chances before the end of the half as firstly Dale Robertson volleyed over on 36 minutes before Kenny Martin missed a great header just 3 minutes later as both sides could barely hit a barn door. Or in keeping with the match, a fucking barn door. 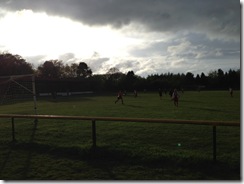 For the 2nd half I stood under the covered terrace with the good number of Fauldhouse fans and their bottles of buckfast. Fauldhouse again made all of the running as Pumpherston just looked dead on their feet and Reid again saved the day from close range to deny Graham Baird. Pumpherston then progressed their “rope a dope” tactic as they tried to counter attack with a couple of fast breakaways led by David Swan. Pumpherston nearly had a remarkable lead on 72 minutes when Swan brokeaway again and cut the ball back to David Murray but his drive was well saved by Iain Stewart and pushed over for a corner. With a 0-0 approaching, Fauldhouse had the final chance of the half, on 89 minutes, with a free kick on the edge of the area. However Gary Shanks shot was poor as the ball clipped the wall and spun wide. Stalemate. 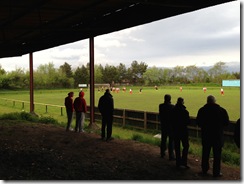 Football in late May is a novelty and even though this report may sound sarcastic in tone, I did enjoy this. For a debut in Junior football, it had elements I was told about before and it wasn’t the worst game I had ever seen. However it certainly was nowhere near the best either and I’m sure my next Juniors match will be substantially better. Pumpherston managed to hold their nerve in the end and win 4 out of their last 5 to not only be promoted but to finish 2nd in the league too. Good luck to both Pumphy and the Hoose in the Premier League campaigns next season. Both sides appear on the up.