Some clubs at various levels moan about fixture congestion. This is more evident at the end of the season when a ropey pitch and shocking weather means some teams have to play a lot. Step forward Guernsey FC, not only are they based 88 miles away from mainland UK, they were having to play just the 17 fixtures in April to try and chase a fixture backlog caused by gash weather earlier this year. I went along to see them on game #17 of the month, the final one, as the weary islanders arrived at Bedfont Sports. 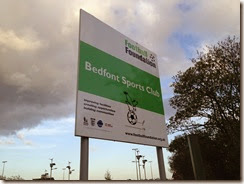 Bedfont (historically East Bedfont) is a small suburban town in London, some 13 miles to the west of central London and only 2 miles from Heathrow Airport. Referred to in the Domesday Book as “Bedefunde”, the name is thought to be derived from Anglo-Saxon Bedfunta = "Bed’s spring", or Bydenfunta = "spring provided with a drinking-vessel”. West Bedfont today is indistinct, however neighbouring East Bedfont, on the Greater London side of the boundary, has developed into modern day Bedfont. During the English Civil War, both the Royalist and Parliamentary armies passed through Bedfont. By 1946 transport began to impact on the village when Heathrow Airport opened and became the largest employer in the area, with the effect of increasing the demand for local housing. The village of Heathrow was lost, as was some of the hamlet of Hatton. This sits beneath the airport's flight path, but The Green Man public house survives from around the 16th century together with a few period properties near the pub and London Underground station (Hatton Cross) on the edge of the airport.

Bedfont Sports were orginally a Sunday League side operating as Bedfont Sunday until 2002 when they switched to Saturday football. Joining the Middlesex Counties League and improving in there until they finished 3rd in the Premier Division in 2008/09 to achieve promotion to the Combined Counties League. Again they always improved upon the previous seasons, with a 9th, 4th and a 2nd place finish last season in Division 1 to achieve promotion to the Premier Division for this season. Their ground is a tidy complex called the Bedfont Sports Club that is around a 10 minute walk away from Hatton Cross tube station. Situated next door to The Orchard, home of Bedfont & Feltham FC, the ground is a reasonable one for this level. With a large clubhouse upon arrival, its a smart looking venue that has a covered area directly in front of the clubhouse and a seating area in the bottom corner. With a small covered area behind the dugouts on the opposite side and the rest of the ground hard standing, there is ample room to expand if they ever need to. 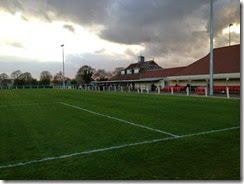 The island boys in Green had been given the fixture list from hell but had done well in April to try and keep their title hopes alive. Out of the 16 played previous to this, they had won 8, drawn 3 and lost 4 with a further fixture being moved to May. These defeats had allowed title rivals Egham to build up an 11 point lead but Guernsey did have 3 games in hand on them, with 5 to play. It did mean that if GFC slipped up here, then Egham could win the title on the night as they hosted midtable Horley Town. The home side had pushed GFC close last season in the division below and had also made a reasonable effort in their first season at this level. They were in 12th for this game, with nothing but pride to play for, however having lost the reverse fixture 5-2 in October, they would be looking for a bit of revenge. 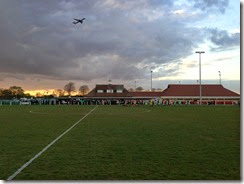 I had read about Guernsey’s Blitzkrieg tactics in their games, where they go all out early on to batter the opposition and have the game won fairly quickly. Therefore it was no surprise to see the away dominate early on and have the Bedfont Sports defence on the backfoot quite often. Bedfont were also playing an outfield player in goal with Adam Turner in the net, although he saved well from Dom Heaume after a long throw had been launched in. The early goal did arrive however after 14 minutes, when Jacques Isabelle sent Nigel Hutton through and he raced into the box only to be taken out by George Marks for an easy penalty decision. Heaume stepped up and slotted past Turner to the delight of the majority of the fans there. Bedfont boss was quickly out telling his players to calm down with “it’s 1-0 with 10, I don’t want it 7 with 50!” His advice was ignored as they were constantly cut to pieces with Heaume having a goal ruled out for offside and then Scott Bradford missing an empty net as he fired a rebound over. So far, so good for the away side as this looked easy. 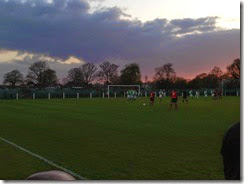 But yet again, the dominant curse struck right at the start of the 2nd half. Bedfont had offered little, never mind goal of the season contender so take a bow George Baldock. He chested a throw-in and tried to hook it back in the area with an overhead kick, instead the ball flew into the bottom corner to stun the away side. Let’s be honest, he’s not meant that, but it was game on. The game now seemed more evenly poised until Bedfont threw it all away on 63 minutes. Sean Ryan and Nigel Hutton were competing for the ball on the far side when Ryan flew into a challenge and Hutton at the top of the shin, oh dear. To exacerbate matters Ryan then stamped on Hutton just to make sure he was sent off. Idiotic behaviour from a club captain. Bedfont needed to hold out now but lasted just 9 minutes when GFC scored their fluke. A short corner (which I fucking hate – ban them) was played between Matt Loaring and Ollie McKenzie and the latter whipped the ball in to be missed by everyone. A defender did clear, however the linesman saw that the ball had already crossed the line and GFC were back in front. They did control the final 20 minutes, although nearly lost it in injury time when Bedfont Sports piled forward and Marks had an unmarked header straight at James Hamon to ensure the 2-1 win. 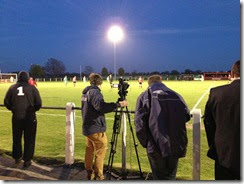 As I attended this game straight from work, rocking up in only a jumper should have been enough for late April, however I was perishing. That did diminish the enjoyment of the game and meant I had to spend the 2nd half stood enough a lamp to get the heat it was giving out. With multiple promotion places available with the expansion of Level 8 for 2013/14, GFC could still go up if they finished 2nd and achieved that with 4 wins in 4 days, finished with the 1-0 win over Farnham Town. It meant their PPG was enough to go up to the Isthmian League, where clubs in Division 1 South are now planning a little jolly for their visit to the island. Bedfont were a reasonably nice club and I wish them well for next season. With the Orchard next door, I will have to be back in the area at some point!

Fellow blogger Dan was also at this game and you can check his report here: http://phildanmatt.weebly.com/bedfont-sports.html 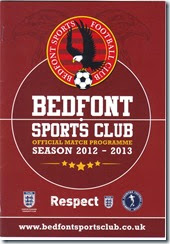