It was that time of year again for the annual RL Magic Weekend – a brilliant idea (which they really couldn’t do in football) where everyone plays each other over 1 weekend in the same ground and to spice it up, the games are the local derbies too. (There’s your reason why they couldn’t do it in football!) This year, the RFL had brilliantly timed the weekend for my birthday so I could do the Saturday as a nice jolly to celebrate another year and watch the Wakefield boys against that lot from Castleford. Up to Manchester! 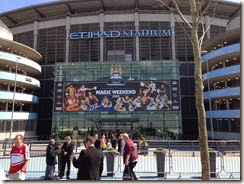 The Magic Weekend first started in 2007 to showcase the sport of rugby league in one individual city and generally to allow fans to enjoy one big piss up. Starting in Cardiff at the Millennium Stadium, the event was generally seen as a success with just over 32,000 enjoying the opening games. Playing at a different stadium, mixing with fans and having local derby games (except in 2009 and 2010) appeals to fans and the event has grown from strength to strength with generally continued steady increases in the overall attendance over the weekend. Magic Weekend moved to Edinburgh in 2009 and 2010, before going back to Cardiff for one season and rocking up to Manchester’s Etihad Stadium last season. MW has offered some classic moments in its short period of existence, from Leeds scoring a last minute winning try via the bar against Bradford in 2007, St Helens thrilling 16-16 draw with Wigan in 2011 and of course Tim Smith’s last minute try last year to defeat Castleford. It’s an event that does split some fans, but it’s a unique concept that should be enjoyed while it’s here. 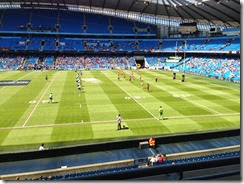 I’d been to the Etihad Stadium before but not since 2008 and Manchester City have come a long way since then! As I hadn’t pulled my finger out in time the bottom tiered unreserved tickets had all sold out so we had to make do with the more expensive 2nd tier tickets. The lucky ticket computer had stuck in us in the VIP area, right on the half way line. There isn’t much difference to where the “plebs” sit either side of the area. The seats have tiny armrests and a big door to go through but it was a pleasant experience regardless. Another massive plus for the day was the fact this is rugby league so beer can be brought to seats, even though it was the £4/pint for Carlsberg option. We arrived early enough to catch most of the opening game which was London Broncos vs Catalan Dragons. Most of the crowd were outside for this game and missed a reasonable first half as Broncos came back from 12-12, only to concede a ridiculous try on HT and then collapse in the 2nd half. And then, it was the big one... 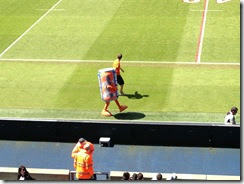 (Possibly the greatest mascot in the world)

Wakefield had easily won at Castleford earlier in the season with a feisty 37-16 win. With the Wildcats 4 points and 2 places above that lot from Wheldon Road, this on paper looked a Wakefield win. However, games don’t always turn out how you want them and this became an 80 minute birthday nightmare as one team showed up and wanted it far far more. (Hint, it wasn’t Wakefield) The game was only 4 minutes old when Castleford opened the scoring as Daryl Clark crossed the line after good work from Grant Millington when the Wakefield defence went missing. It was a common sight during the 1st half as the Tigers tore apart Wakefield and added more tries through Kirk Dixon, Jamie Ellis and Craig Huby before 25 minutes had been played. With Rangi Chase involved with all the good things that Cas were producing, Wakey had to wake up. They did, in a way with two quick fire tries through Dean Collis and Danny Kirmond to give the Wildcats fans hope but that was gone by HT as Cas scored another two through Dixon and Justin Carney. 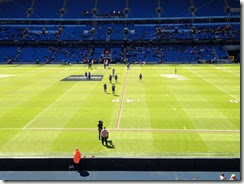 Like the London Broncos game last season, it was all over by HT with a 34-12 deficit but with Chase still dominating play, Castleford added another two tries with Dixon and Jordan Thompson’s down in the bottom corner. By now, this was just a hammering and Dixon added his 4th and Castleford’s final try of the day with a sweeping move that saw the ball go from left to right and cut through the Wildcats defence. Beer was needed to just get through this game but a late try from Chris Annakin gave a cheer before the Tigers took the piss late on as Ellis fired a drop goal over. The game was over long before this and the majority of Wildcats fans had long gone but Castleford’s unlikely play-off push was back on. Wakefield needed to recover from this and quickly and an away win against Salford put them (sort of) back on track. Just a bad day at the office. 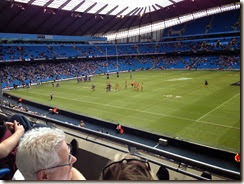 The Hull derby was another match I was massively looking forward to. With it really being friends v friends and family v family, I’d love to actually go to Hull (yes really!) and watch one of the clashes. With the Magic Weekend games between the sides always a good one watch, I was up for this, especially after the previous 80 minute shambles. Both sides support was phenomenal with the FC fans behind the sticks and KR fans down our side, a full stadium with this lot would be absolutely rocking! 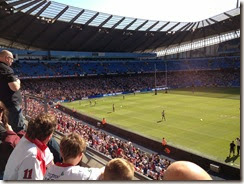 When FC scored after just 4 minutes as they took advantage of a 40-20 as Richard Whiting crossed over, a close match didn’t look on the cards. Yet KR, backed my some outstanding fans, slowly came back into it as FC began to implode. Their equalising try was the epitome of that with FC missing a few tackles and then bailed out by Shannon McDonnell, only for KR to score on the very next play, right in the corner through Greg Eden. You wouldn’t think it was FC who had won 8 out of the last 9 as they could only watch Craig Hall’s brilliant one handed catch and try as Kingston Rovers were 10-6 up at HT. 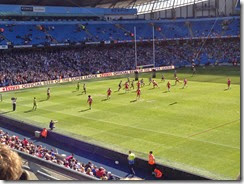 KR continued to look comfortable for the rest of the match and as Michael Dobson added a penalty and Alex Brown added a 3rd try after Eden’s brilliant cross field pass, a 16-6 win looked likely. 71 minutes in, I turned to a friend and wanted another FC try just to make the game interesting late on. Then came the next 9 minutes. FC got their 2nd try on 73 minutes when Tom Lineham powered through in the bottom corner. Daniel Holdsworth had to make the conversion and did via a post. It was now 16-12. And then came the equaliser. Kirk Yeaman took advantage of a high cross field kick and touched down right on the line. A long long wait for Steve Ganson in the Video Referees box to make his mind up as the try was given, but Holdsworth missed this conversion. With a draw looking likely as both sets of fans roared their team on, the clincher came on 79 minutes. Whether he meant this as a drop goal attempt or a desperate boot upfield only Danny Houghton will know but Eden forget the RL golden rule, “never let the ball bounce!” That bounced allowed Chris Green to nip in and send the FC fans wild. The try was given despite Green being offside and Ganson having around 2 minutes watching it on the video replay. Breathless. 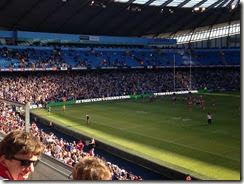 The final game of the day we missed as sitting in the sun for 6 hours had finally taken its toll, but Warrington smashed St Helens 48-22 for an easy win. This was an enjoyable way to spend my birthday and despite the result for Wakefield was an excellent day out. The RFL have already announced that Magic Weekend 2014 will be back in Manchester, but 1 week earlier so will need to make another trip up north. 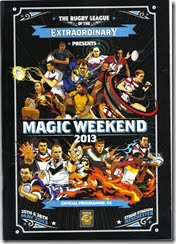