Another season following the Vase finally concluded with the big one at Wembley. After an interesting season seeing some decent and not so decent Vase games, a pointless trip to the Isle of Wight and some sour grapes in the Semi-Finals, both Tunbridge Wells and Spennymoor Town were the lucky two to make it to the Final. Dragging along my housemate this year to enjoy the magic of the Vase, we were plastic Kent fans for the day, joining the 11,000 who had made the trip up. 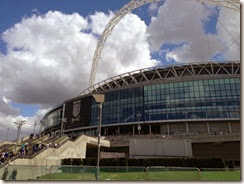 Standing in their way were the NE cracks in the form of Spennymoor Town, themselves an excellent side in the Northern League. They had seen off Bridlington Town, Newcastle Benfield, Billingham Synthonia, Lordswood, Bemerton Heath Harlequins, Gornal Athletic before dispatching Guernsey in the Semi-Final with a 4-1 aggregate win. Their manager Jason Ainsley had described the competition as “the holy grail of non-league football” and so would be taking it extremely seriously. 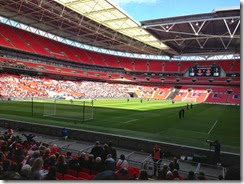 Having attended last year with just an attendance of over 5,000, with Tunny Wells bringing 11,000 themselves, there was a good amount of people here for this. Sadly, I had seemed to be lumbered with the cretins who only know football on Sky and so this game was a bit of a culture shock for them. The atmosphere also came mainly from the other side of the pitch, the 5,000 fans from the NE outsang the Kent lot which probably affected the Tunbridge Wells performance on the pitch. 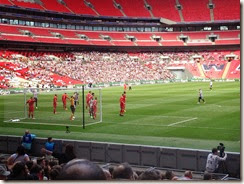 It was mainly men against boys for the majority of the game, but it could have been so different if Spenny goalie Robbie Dean hadn’t saved well from Josh Stanford’s early shot. The NE boys soon began to dominate however as Tunbridge couldn’t stop them rampaging forward and creating chances. The goal was coming and it arrived on 18 minutes with a well worked move. Keith Graydon whipped a cross in to the 6 yard box and the movement of Gavin Cogdon completely caught out the Tunny defence and the tiny striker headed past Chris Oladogba. Tunny were nearly blown off the pitch soon after as Spenny missed chances through Mark Davison and then Cogdon as Tunny scraped into HT lucky to be still in the game. 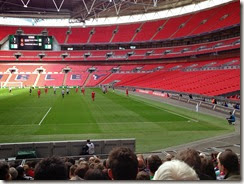 Spenny played even better in the 2nd half as Oladogba kept his side in the match with a string of outstanding saves. Cogdon received the ball in the area and after twisting away from some poor challenges fired a shot that Oladogba saved well. He also saved a shot from the resulting corner as Tunny were struggling. Spennymoor rarely had to defend but did look a tad ropey at the back midway through the 2nd half when Perry Spackman headed wide a great chance. The half did belong to Spenny as it looked like the match would peter out with a 1-0 win, but amazingly with 12 minutes to go, Tunbridge Wells grabbed the equaliser. Dean in the Spenny goal had already looked uncomfortable at crosses but God knows what he was trying to do when Jason Bourne whipped a cross in. Dean fumbled and Stanford hooked the ball back into the empty net. The 11,000 suddenly found their voice as the Final was back on, for two minutes. Spenny went down the other end and slipped the ball around the static defence and Graydon smashed home inside the penalty area. You’d expect in a final for the team behind to bombard the goal late on, but Tunny didn’t have it in them and Spennymoor won the Vase for the first time in their history. 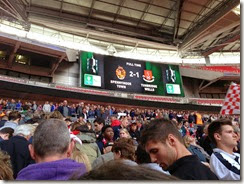 And that was that! This year I didn’t bother to stay for the trophy being awarded and the majority of the Tunbridge Wells fans thought the same way. The right team (and fans!) won on the day so well to Spennymoor Town. Another season following the Vase was enjoyable and although I didn’t get to every round, its nice to follow it all the way through. I’ll hopefully do another “Road to…” next season but maybe its time to focus on another tournament after 2 seasons of the Vase. At the time, I also thought this would be my final game of the season and fitting to end on 200 games in total, but there was more to come…

- Atmosphere: 5/10 (all came from the Spennymoor side) 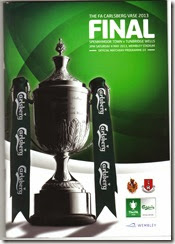