When I joined the Scotland Supporters Club last summer, I was always focused on the Belgium away game last October. While I was in Brussels, tickets were like gold dust and so me and a friend had to watch from a fan park. Since then, Scotland’s World Cup hopes had gone and when an away trip came up to the 4th best team in the World came up, a fair few didn’t fancy it. As the tickets came down to 0 points, I jumped on the chance for a cheeky holiday, an away point and my first Scotland away game. Škotska na turneji! 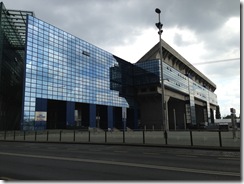 Zagreb is the largest city and the capital of the Republic of Croatia. To give the city and Croatia as a whole a proper introduction to its history, I would need a whole blog, nevermind a just a paragraph! The history of Zagreb dates as far back as 1094 A.D when the Hungarian King Ladislaus, returning from his campaign against Croatia, founded a diocese. Alongside the bishop's throne, the canonical settlements developed north of the Cathedral, as did the fortified settlement Gradec on the neighbouring hill. After a Tatar attack in 1242, Hungarian King Bela IV bestowed Gradec with a Golden Bull, which offered its citizens exemption from county rule and autonomy. In 1557, the Croatian Parliament, representing both Croatia, Slavonia and Dalmatia, first convened at Gradec. Zagreb was chosen as the seat of the Ban of Croatia in 1621 under ban Nikola Frankopan. During the 17th and 18th centuries, Zagreb was badly devastated by fire and the plague. Although, in 1776, the royal council moved from Varaždin to Zagreb. In the 19th century, Zagreb was the centre of the Croatian National Revival and saw the erection of important cultural and historic institutions. In 1850, the town was united under its first mayor - Janko Kamauf. After the 1880 Zagreb earthquake, up to the 1914 outbreak of World War I, development flourished and the town received the characteristic layout which it has today. During the 1991–1995 Croatian War of Independence, it was a scene of some sporadic fighting surrounding its JNA army barracks, but escaped major damage to turn into the modern city it is today. 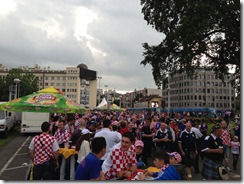 After some debate over where the game would actually be played, it looked like the seaside city of Split would win, however Zagreb and Dinamo’s Maksimir Stadium was the final location. Situated in the east of the city, next to the Maksimir Park, the ground is really impressive looking on the outside. Having undergone some refurbishment in 1998 and 2011, the ground has 4 main stands with the away fans located in the two tiered West Stand (Croatian?). With a glass structure built onto the old stand, it looks good. However, on the endless climb up the stairs to the top tier, you pass multiple empty rooms that lead nowhere with stuff just dumped on the floor. The toilet block was brilliantly a pitch black room with walls to piss on. Not even a trough there (which was only discovered when someone got their mobile light out)! The actual ground is decent though, with good views despite a track around the pitch and a relaxed atmosphere with home fans mixing well with the Tartan Army in the ground and the concourse. Despite parts clearly being a shithole, the ground has brilliant history with Euro 1976 having two matches here and most of Croatia’s best home football moments (Paul Robinson’s airkick anyone!?) coming here. It was brilliant to see. 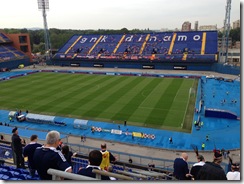 Despite only playing their first international as an independent nation in 1990 (unofficially) Croatia were the top seeds in this World Cup qualifying group and were ranked as the 4th best team in the World. They haven’t reached the heights of the 1998 World Cup but after recent decent performances in the past few tournaments (barring 2010), the squad look quite good to challenge for QF places again. This group however had pitted them against “the most exciting team in the World” with Belgium also looking good. Both sides had won all of their games so far in the group, except the 1-1 draw between the two sides in Brussels in September 2012. With Belgium playing Serbia at home on the same day as this game, it looked like the group winners would be decided in October as Belgium visit the Maksimir. 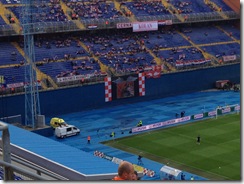 Since that defeat in Brussels in October, Scotland have sunk sunk sunk and were already out of qualifying. This was before San Marino and before Andorra too. While Levein was punted and Strachan brought in, wins over the mighty Luxembourg (just) and Estonia (just) gave the Tartan Army hope that we were back on the rise. Yet another defeat to Wales and an away defeat to Serbia meant it was game over. Coming into this game, many players had pulled out meaning an even more daunting task awaited them as 14 players went over to Croatia who had less than 10 caps. Still, even with the Croatian press claiming “you will not pass the halfway line”, I had a feeling that we could nick an away point. 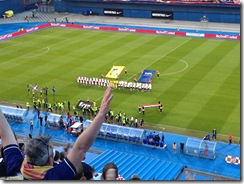 Croatia were also missing some key players with both Luka Modric and Vedran Corluka suspended after picking up booking in their 2-1 win over Wales. Missing the key playmaker in Modric, Croatia were lacking in some spark and it was Scotland who were comfortable as Alan McGregor wasn’t troubled. In fact Scotland even had the audacity to create a chance as James Morrison fired over from 30 yards from a free kick. Croatia themselves were having to resort to long range efforts as McGregor watched an Ivan Perisic shot fly away. Then, on 26 minutes came a magical moment, I’ll detail what went through my head. “Go on Maloney, good run (ball breaks away from him), unlucky! Hang on, that’s deflected into the box and Snodgrass has made a run…… OH MY GOD.” Cue carnage from the 2,000 travelling Scots as Snodgrass had beaten Stipe Pletikosa to the ball and diverted it in as well as kicking the goalie in the face. Beer went everywhere, people hugging strangers and just general pandemonium as the unthinkable had happened. I got a quick snap of the scoreboard at 0-1 as I didn’t expect it to say that way for long, and it shouldn’t have when Sammir collected a dreadful backpass but fired the ball over the bar. Ivica Olic also should have done better when he let the ball roll underneath him to create a chance but fired his shot high and wide. It was HT and it was 1-0. More beer please. 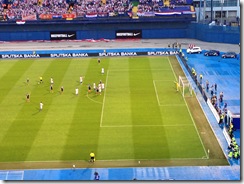 I knew that the 2nd 45 minutes were not going to be enjoyable as Croatia would no doubt have loads of possession and pin us back, but to be fair to Scotland we were not totally under the cosh as I (and many others) expected. You do need those slices of luck now and then and we got that early on as Olic produced a moment of brilliance to whip the ball in from the left and Mario Mandzukic stuck out a leg and as the ball spun off his foot it went just wide. 26,000 Croatian thought it was in, however 2,000 away fans blew a sigh of relief. Croatia had more chances but these were mainly long distance efforts that flew wide. But with Leigh Griffiths chasing everything up front and Morrison and James McArthur closing everything down in midfield, the home side didn’t have an answer. We nearly even had the cheek to grab a 2nd as Steven Naismith connected badly with a header and Snodgrass fired over. The time counted down as it looked more and more likely as we’d get the win and when ref David Fernández Borbalán blew the final whistle it was more mayhem. This team of no hopers and rag-a-tags had beaten the “4th best team in the world”, only the 2nd ever team to beat Croatia at home in a competitive game. 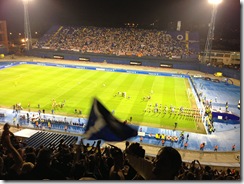 This one result won’t change much, and we won’t be going to the World Cup, but this was a fantastic evening. The result was fully deserved as we pressured Croatia into mistakes and long range efforts while hitting them on the break. They now need to beat Belgium in October and hope for more dropped points later in the group. Croatia is a brilliant place to visit and really enjoyed my 3 night stay in Zagreb. I’d recommend it to anyone to have a visit. As the home fans flooded out and clapped us, we were kept in for an extra 30 minutes and had a sing song. Bizarrely the final song was Adele’s “Skyfall” and as my 2012/13 season ended, I looked back at my biggest season ever – and a cheeky first foreign trip for the blog. “This is end, hold you breath and count to 10". A brilliant evening. Well done Scotland.

P.S – I presume every away game is like this! 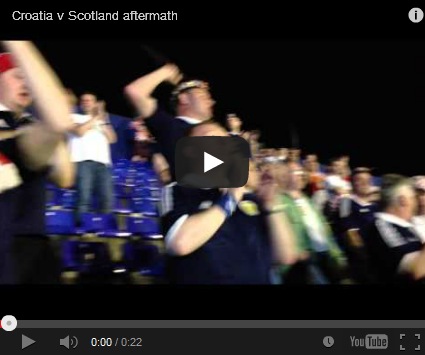 Photos from Croatia vs Scotland