A part of this hobby is reacting to news about a ground that suddenly becomes “endangered” due to various reasons. Financial difficulties, building a new ground or a legal dispute with the owners are all good reasons. Having watched Darlington lose their ground as they went into the financial abyss and the Northern League, I was convinced that they would be fine and start this season still at the Darlington Arena. They didn’t. Fast forward 9 months and news that Coventry were in dispute with the owners of their ground and in danger of moving out. Lightning doesn’t strike twice – it was off to Cov. 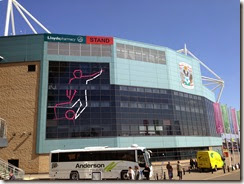 Coventry is a city and metropolitan borough in the county of the West Midlands and is the 12th biggest city in the UK. It is likely that Coventry grew from a settlement of the Bronze Age and at that time large flowing river and lakes, created the ideal settlement area. The Romans founded another settlement in Baginton and another formed around a Saxon nunnery, founded in 700 AD, that was later left in ruins by King Canute's invading Danish army in 1016. By the 14th century, Coventry was an important centre of the cloth trade, and throughout the Middle Ages was one of the largest and most important cities in England. In the 18th and 19th centuries, Coventry became one of the main British centres of watch and clock manufacture and ranked alongside Clerkenwell in London. As the industry declined, due mainly to competition from Swiss Made clock and watch manufacturers, the skilled pool of workers proved crucial to the setting up of bicycle manufacture and eventually the motorbike, car, machine tool and aircraft industries for the 19th century. By the early 20th century, bicycle manufacture had evolved into motor manufacture, and Coventry became a major centre of the British motor industry. Coventry suffered severe bomb damage during WW2, most notoriously from a massive Luftwaffe air raid known as the "Coventry Blitz” on 14 November 1940. Firebombing on this date led to severe damage to large areas of the city centre and more than 4,000 houses were damaged or destroyed, along with around three-quarters of the city's industrial plants. More than 800 people were killed, with thousands injured and homeless. The Germans coined the term "Coventrate" to describe the tactics of complete urban devastation developed for the raid. Today, Coventry thrives from the diverse ethnicity of the population and is considered one of the UK’s safest cities. 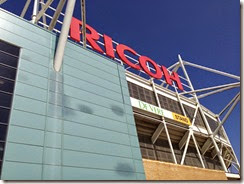 Coventry City FC were founded in 1883 by William Stanley and were made up by employees from local cycle firm Singers. Singers FC then turned professional in 1892 before renaming themselves to the current Coventry City they use today in 1898. Playing at the Highfield Road playing fields, they turned this into their stadium and played here for the next 106 years. They were elected to the Football League 2nd Division immediately after WW1 and floated around there until a local legend took over, Jimmy Hill. The Chin led Cov to the 2nd Division Championship in 1967 and his revolutionary touch saw him introduce special sky blue trains to away matches, pre-game and half-time entertainment among other things. While Hill left to persue a TV career, Coventry started their 34 year journey in the top flight. After a brief Inter-Cities Fairs Cup campaign in 1970/71 (when they exited to Bayern Munich) and transforming Highfield Road into an all seater stadium in 1981 (until Leeds fans tore the seats up), their finest moment came in 1987. The FA Cup win over Spurs with a 3-2 AET win is their only major trophy to date and saw rise in Coventry’s league fortunes finishing 7th in 1989. However, during the Premiership years, Coventry began to push their luck with a series of final day and penultimate game escapes, before in 2000/01, they were relegated after a 3-2 defeat at Aston Villa. 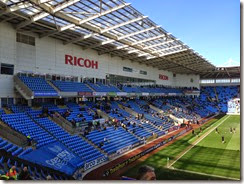 They haven’t been back since. In fact, they struggled in the Championship with only an 8th place finish in 2005/06 to show for the 11 seasons they spent there. (One of the Project Premiership seasons) One highlight was in 2005/06 when they moved from Highfield Road to the modern Ricoh Arena. Hugely impressive on the outside, inside is rather more bland with 3 stands identical to each other and the slightly different West Stand (picture above). This has the corporate boxes attached to it and an exhibition centre to give some difference to a largely dull ground. Like most modern stadia, the ground is on the edge of the city (to the north) and also has a casino built next door, with a large Tesco “just” across the road for company. It was a tad disappointing if I must say so, but Coventry fans apparently like it. 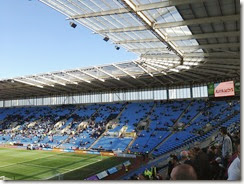 Off the pitch, the Sky Blues have struggled for some time now and earlier in the season were deducted 10 points after an “administration event”. The occurred when club owners SISU placed a subsidiary which has no financial assets into administration, however the Football League saw past this and Coventry’s promotion hopes went with it. After relegation last season, Mark Robins (before he left for Huddersfield) and Steven Pressley had been making some improvements to the performances after a slow start and were coming into this game in 16th position. A lot of chat in the programme featured comments like “we will be up there next season” and praised the positive work that Pressley had done since joining from Falkirk in March. They welcomed one of London’s “forgotten clubs” as Leyton Orient were in town. The O’s were still having problems with West Ham’s Olympic Stadium bid, which now looks certain that the Hammers will be playing in there in the future. They had to win this game to ensure the final playoff spot would go down to the final day, although they had to hope Stevenage (with nothing to play for) would upset 6th place Swindon Town. 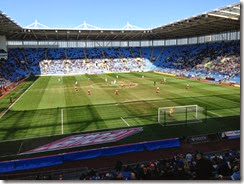 As he’s from the area (roughly) Stuart had come along for the fun as well although we quickly saw some of the worst football we’d seen this season. Both sides started off dreadfully as barely anyone could complete a pass, nevermind create a chance. The first shot though was fired after 5 minutes in, however John Fleck’s effort was easily saved by Orient goalie Jamie Jones. Coventry kept up the pressure as would have taken the lead when Carl Baker’s cross was falling straight to Danny Philliskirk’s head but Leon McSweeney got there first to head over the bar. Philliskirk had a glorious chance some time later when he was put through and rounded Jones, only to stumble and allow McSweeney to deny him again with an outstretched foot. HT was approaching and while Orient had been in the game, they had offered little as an attacking force. However, on 45 minutes, they broke down the right through Kevin Lisbie. His low cross was missed by a forward (no way was it a dummy) but it allowed Dean Cox to reach the ball and hit a first time shot that curled away from Joe Murphy and into the bottom corner. This game had barely deserved anything, but we did have a goal. Somehow. 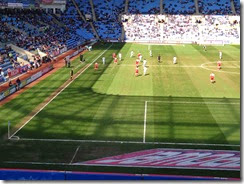 The 11,234 people in the Ricoh Arena were begging for a better 2nd half. It didn’t arrive. Martin Rowlands nearly gave Orient a comfortable lead when he fired a free kick just wide early on, but it then turned into more stalemate as with Swindon 3-0 up, both sides knew they had nothing to play for. Coventry did have a couple more chances during the half as David Bell and Nathan Clarke both fired shots wide from close range. The final chance was fired wide (see a theme here?) on 86 minutes when Franck Moussa came forward but the finish summed the game up. The 893 away fans (including the two plastics) celebrated a win and while they were going to finish outside of the playoffs, they gave their support to the team and boss Russell Slade. A chorus of “he’s got no hair, but we don’t care! Russell Russell Slade!” (quite similar to a song Morecambe sing about Kevin Ellison) rang around the Ricoh as both sides were just delighted the game had ended. 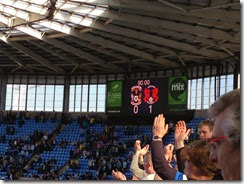 I don’t watch much Football League action that doesn’t involve Morecambe and with 90 minutes of dirge like this, its easy to see why! Coventry will need to improve rapidly next season if they are going to improve upon their final position of 15th this time out. More importantly for them, they have not been able to agree a lease with Ricoh Arena owners ACL and so will be playing 2013/14 elsewhere. Walsall, Nuneaton and Rushden & Diamonds’ old ground Nene Park have all been mooted for them to play at. This was the final Coventry City game to be played at the Ricoh then and the dire performance probably sums their time up there. Good luck to Orient next season, I will try and get to a game in East London next time as they have unfairly seemed to have been forgotten by me for now. This game however, a distant memory. 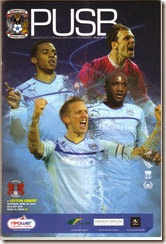 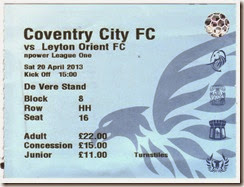