When is a game not a game? This was pencilled in as soon as Bradford snatched a late equalizer at Valley Parade in the original tie. However, plans seemed dashed when Bradford were thrown out of the Cup for playing ineligible Curtis Good, who was on loan from Newcastle. Bradford appealed against the decision but everyone expected this to be rejected. Amazingly (and well done to them for opening a massive can of worms), the FA accepted the appeal and this game was back on. 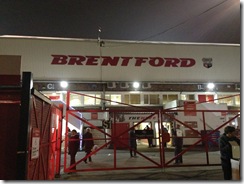 Brentford is a town in west London and part of the London Borough of Hounslow. It is located at the confluence of the River Thames and the River Brent and was formerly within the historic county of Middlesex. The name is recorded as Breguntford in 705 in an Anglo-Saxon charter and means 'ford over the River Brent'. The ford was most likely located where the main road crossed the river. The settlement pre-dates the Roman occupation of Britain, and thus pre-dates the founding of London itself. Many pre-Roman artifacts have been excavated in and around the area in Brentford known as 'Old England'. Bronze Age pottery and burnt flints have been found in separate sites in Brentford. Brentford is the first point which was easily fordable by foot on the tidal portion of the River Thames. Partly for this reason it has been suggested that Julius Cæsar crossed the Thames here during his invasion of Britain in 54 BC. In his own account, he writes that he crossed the river 80 miles from the sea and Brentford is also this distance from his supposed landing beach. 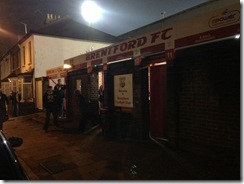 Sometime after Cæsar’s tour, Brentford FC were founded, in 1889. Set up to serve as a winter pursuit for Brentford Rowing Club, the club moved to Griffin Park in 1904. In 1920 it was a founding member of Division 3 South and in 1929/30, they achieved a perfect home record, but still failed to go up. (The last of the 6 teams in the Football League to do so) Promotion to the Second Division was finally achieved in 1932–33 and then two years later, Brentford reached the First Division. They finished 5th in its debut season which is still the club's highest ever league position. Despite a decent record in the London War Cup, after WW2, the club were relegated from the First Division and promptly sank, reaching Division Four in 1961/62. The club’s existence was then threatened as QPR tried to take over the club which was only fought off by a late emergency loan. The club then stabilised and began to yo-yo between Divisions Three and Four where they managed to stay in 1977/78. Recent highlights have been the Freight Rover Trophy Final in 1985 where they lost to Wigan, promotion back to the Second Division in 1991 (just before it became the First Division), the takeover by the Brentford Supporters Trust in 2006 and the recent promotion back to League One in 2009. 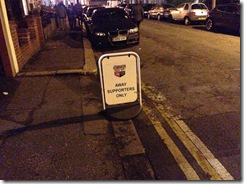 The club are now led by German bomber Uwe Rosler and while last season saw some disappointments, such as missing out on the play-offs by 6 points and crashing out of the FA Cup to Wrexham, this time out it looks good for the Bees. Coming into this game, the Bees were in 2nd place following good wins over MK Dons and Notts County. With League 1 looking really tight this season, Brentford should be there or thereabouts in May. And with QPR seemingly determined to throw themselves back to the Championship, there could be a tasty West London derby next season… Bradford City since I saw them late last season have improved remarkably. I had tipped them for another season of struggle but a great start to their campaign sees them in the play-offs and looking strong for a promotion tilt in 2013. Bradford were also going well in the other national cup competition as they are through to the Semi-Finals of the League Cup after beating Arsenal on penalties at Valley Parade. With a 2 legged tie against struggling Aston Villa coming up, a day out at Wembley could be on the horizon. Stranger things have happened… 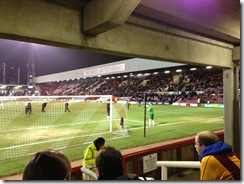 I went along to this game with several work colleagues including a couple of Bradford so I was in the away terrace of the Brook Road Stand. A two tiered number that had a shallow terrace on the bottom with seating on the top. While standing at football matches is good, you can’t really see the far side of the pitch from this stand so I can only presume the view from the seats are better. To the right of us was the laughably named Bees United Stand which is the main seating area of the ground. Behind the other goal was the bigger Ealing Road terrace where the Brentford ultras were standing. The other impressive seated stand of The Bill Axbey Stand was closed for this game (and for good reason with Brentford easily coping with the fans who turned up in only 3 sides) although one loner did manage to get in there so fair play to him for proving a point. Despite rarely achieving attendances of over 5,500 in a 12,000 capacity ground the Bees are looking to move to the Brentford Community Stadium in the future and they have purchased a potential site at Lionel Road. If things go well, they could be playing at their new ground at the start of 2016/17. 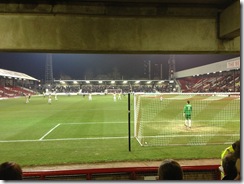 For a midweek game miles away Bradford had brought a fair amount of fans for this and while they sang, “ITS ONLY A CUP, WHO GIVES A FUCK! WE’RE SUPER CITY AND WE’RE GOING UP!” I kept my love of Morecambe quiet and the expected battering we will be giving out to them on January 1st. (We can hope!!) With some big games coming up for City, they used this game to put out a weakened side to allow youngsters and reserves to get some experience. Brentford did the same and so promptly 2,643 people in Griffin Park witnessed a dreadful 90 minutes of football. The home side had forced some good saves from City goalie Jon McLaughlin before Bradford went down and scored with their first real chance. Zavon Hines was put through into the box by Alan Connell but his shot was blocked. It fell to Kyel Reid who fired first time past Gournet. The away side looked fairly comfortable till half-time until Marcello Trotta was felled in the area by Carl McHugh with one of those challenges that looked like a soft penalty. Trotta fired home the penalty to make it 1-1 at HT. The 2nd half saw Brentford unsurprisingly take the game to the away side with Sam Saunders and Shaleum Logan having the Bees best chances. Late on Bradford caused the home side problems with Ricky Ravenhill twice going close as everyone was delighted with the prospect of another 30 minutes of what we had just witnessed. 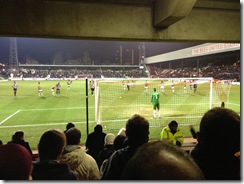 Luckily, extra time brought 30 minutes of good entertainment as both teams opened up and went for it. City retook the lead when Blair Turgott got to the byline and while he got his cross in, he was taken out by Logan. Ref Graham Scott awarded the 2nd penalty of the night which Connell converted easily. Again though, Brentford went for it and were rewarded when two goals in two minutes ended City’s resistance. Firstly came the equaliser on 102 minutes when Harry Forrester’s shot flew into a crowded penalty area and before City could clear, Trotta smashed home to make it 2-2. Clayton Donaldson who had been anonymous up until this moment then made it 3-2 when he fired past McLaughlin at the near post. The home side then made the game safe just a minute into the second period of extra time when Forrester ran past Richie Jones before firing a low shot in right in front of the Ealing Road terrace. At this point the game was safe and Bradford were facing their first cup defeat of the season. The away side did push to try and get one back but Gounet in the Brentford goal was comfortable for the final 10 minutes. 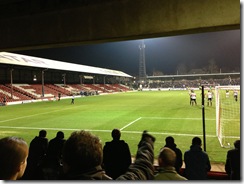 Brentford’s “reward” for winning this was a 3rd Round tie in January to Southend. Sounds delightful. With the club still in the Top 6 and only two points off top of the table Tranmere, the FA Cup may take a back seat as the club try and achieve promotion to the Championship. Bradford still have League 2 promotion, the League Cup and the Johnstones Paint Trophy to compete in and so this defeat will probably be not that concerning to them. In fact, boss Phil Parkinson can take many positives that this inexperienced side competed so well with a club challenging for promotion in the league above. It was a good night out with good company and (eventually) the football was good too. Another London based FL club done, not many more to go now!

Photos from Brentford vs Bradford City 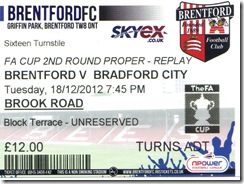