Programme: N/A – sold out before arrival

When cup draws are made, there is always a tie, for whatever reason, that stands out. It might be because it features the top teams in that competition or brings together a local derby. It might also be because the person who writes this blog is a nutjob and had been looking forward to Chesham United vs Barrow since the draw was made. It was for simple reasons; a chance to go part of the Metropolitan Line I hadn’t been to, tick. A ground I had heard good things about, tick. And the fact that Barrow in this competition last season had crashed out to a team playing at the same level as Chesham, tick x3. 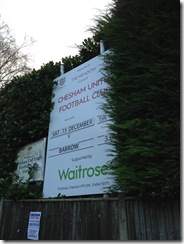 Chesham is a market town in the Chiltern Hills, Buckinghamshire. It is located 11 miles south-east of the county town of Aylesbury. There is archaeological evidence of the earliest settlement during the Late Mesolithic period around 5000 BC in Chesham where a large quantity of Flint tools were found. The first recorded reference to Chesham is under the Old English name Cæstæleshamm meaning "the river-meadow at the pile of stones” around 970 in the will of Lady Ælfgifu, who has been identified as the former wife of King Eadwig. Chesham is noted for the religious dissent which dominated the town from the 15th century. In 1532 Thomas Harding was burnt at the stake in the town for being a heretic. From the 17th century Chesham was a focus for those dissenting from mainstream religion as the Quakers met in the late 17th century and the Baptists first meetings date back to about 1640. The primary industries of the town in medieval times were flour production, woodworking and weaving of wool. The number of clothworkers, including spinners and those associated with dying grew rapidly between 1530 and 1730 and became the major industry in the town prior to a period of rapid decline. Between 1740 to 1798 mills were converted to produce paper (pulp) responding to London's insatiable demand for paper. However, technological developments in paper-making elsewhere rendered the mills unprofitable and they reverted to flour production in the 1850s. From the early part of the 20th century onwards there has been a considerable expansion of the town with new housing developments and civic infrastructure. Increasingly Chesham has also become a commuter town with improved connection to London via the Underground and road networks. The town centre has been progressively redeveloped since the 1960s and was pedestrianised in the 1990s. The population of the town has increased to slightly over 20,000 but further growth has been restricted because the area forms part of the Metropolitan Green Belt. 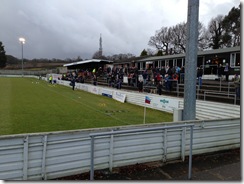 The club of the town were set up just after WW1 as a result of a merger between Chesham Generals and Chesham Town in 1917. After floating around the Spartan League, they finally moved in 1947 to join the Corinthian League. Here they achieved very little apart from a 2nd place finish in 1961 before the league was disbanded 3 years later. After some time in the Athenian League and a runners-up place in the FA Amateur Cup (where they lost 1-0 to Leytonstone) they joined the Isthmian League in 1973. They yo-yoed between the leagues over time but their finest moment in the Isthmian came in 1992/93 when they became Champions of the Premier Division, followed up with a Berks & Bucks Senior Cup win too. Joining the Southern League Premier in 2004/05, they were relegated to D1 just two seasons later but recovered to re-join the Premier in 2010/11. After last season’s impressive 4th place finish, they lost out in the play-offs to AFC Totton. 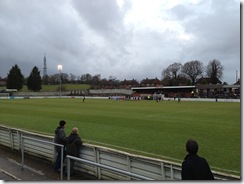 This season has not been as kind to them however as they have struggled to recreate last season’s form and were going into this tie down in 18th and looking like having a relegation battle. They still managed to have an impressive trophy run amongst this though and had already seen off Bishops Cleeve, Taunton Town, Canvey Island and Bath City to set up this 2nd Round tie. Their opponents had just nipped down the road, a 276 mile road from Cumbria. Last season, the Blue Square Premier side played fellow Level 7 club Wealdstone in this competition at the 2nd Round stage. While I had been tempted by it, I diverted away to nearby Hillingdon Borough. Barrow had a nightmare game with goalkeeper Danny Hurst suffering a worrying injury that took 25 minutes for him to be taken to hospital. Then Barrow threw away their lead to crash out 2-1 to top a miserable day off. With the Bluebirds struggling in the Blue Square Premier, and their previous troubles at this stage of the competition, this had all the makings of a cracking cup tie. 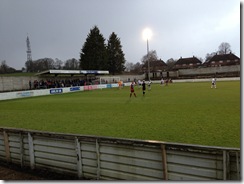 What should have been an easy journey turned into a shambles. Cheers to TfL for claiming to run a Chesham service from Finchley Road at 13:20. That’s no good when it’s already left when you arrive at 13:15. We got to the ground at 14:55 just in time to see the players come out but far too late to snag a programme. (I’ll find it on eBay one day…) What also didn’t help was the dreadful weather as it lashed it down on arrival all game. All that could save the day now was for the game I’d been looking forward to for a few weeks to be half decent. Oh. It was evident early on that Barrow boss Dave Bayliss was determined to avoid another Wealdstone and they looked really up for this. Barrow had made the brighter start with Adam Boyes and Paul Rutherford causing the home defence all sorts of problems. The game could have been very interesting however if Chesham’s early goal had been allowed to stand. James Potton burst into the Barrow area and pulled the ball back for Simon Thomas (not him) to tap in but he was called offside. From then on it was all Barrow as they were backed by a good following from Cumbria as they dominated. Ches goalie Shane Gore saved well from Richie Baker but a goal was coming. That arrived on 25 minutes. A cross from Gavin Skelton looped in via a deflection and Boyes had the easy task of tapping in at the back post. What Chesham (and this game) needed now was for the home side to stay strong. Conceding a 2nd just one minute later then was probably not for the best. Rutherford sent a great cross in from the right and Sean McConville crashed his header in off the bar. Chesham had Gore to thank again as he saved from Boyes and then James Owen as at HT the game looked over already. 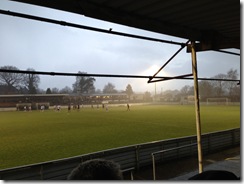 Myself and Richie B (who is starting to attend more and more of these games with me, maybe out of pity) watched the majority of the 2nd half from the comfort of Chesham’s clubhouse in the warmth with a nice cold pint. The view was still good (see pic below) as we watched the home side create an early chance as Thomas broke away on the left and rounded Barrow keeper Shaun Pearson (who had needed to do cock all so far) , his cut back found James Potton but his shot was well blocked. It was normal service resumed soon after however as Barrow chased the goal to really kill the contest off. It arrived on 64 minutes when McConville’s cross from a short corner was headed in at the back post by Boyes. Too easy. Barrow added a 4th just 7 minutes later when Joe Jackson was taken out in one of the most blatant penalties I will ever see. Richie Baker easily converted to make it 4-0 which was fully justified based on the Barrow performance. Late on the Cumbrians eased off which is what you would expect being 4-0 up and that allowed Chesham to come back into the game somewhat. They got a consolation goal on 86 minutes when Bruce Wilson fired a shot in from outside of the area and this took a massive deflection off Matt Flynn and fooled Pearson. Barrow then went and added a 5th even later on when McConville set up sub Danny Rowe who fired in as Barrow cruised into the 3rd Round. 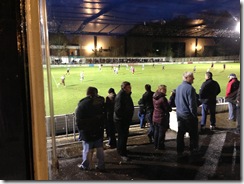 (View from the clubhouse)

It was Chesham’s big day but sadly with the weather and the game, this was easily my worst day out of the season. The home side was blown away by Barrow and the 5-1 scoreline was fully reflective of the game. The club officials who I spoke to during the game were all friendly however so I may pop out here again when the weather is a lot better. The Meadow is a picturesque ground with some good terracing in it that fits well in the Southern Premier League. Barrow since playing this game have only managed a 1-1 draw in the FA Cup with fellow BSP side Macclesfield Town, meaning they will have another game to play in the future. For the 3rd Round of the FA Trophy, Barrow have a shorter trip, but a tough game against Gateshead. Although they will have league survival higher up on their agenda for 2013.

- Value for money: 6/10 (reasonable with the discount)

- Programme: N/A – sold out before I arrived 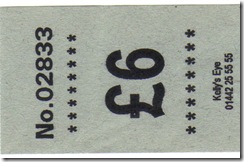