It had been a while since the lads from t’Bay had played in the South, or at least played a game that I had a reasonable chance to get to. I watched four months earlier in the glorious sunshine, Morecambe storm to the top of the league after dismantling Exeter City within 30 minutes. By now, a small team and injuries had sent Morecambe down the table towards where we all expected them to be at the start of the season. Another trip south, this time to Wycombe was one I had pencilled in since the start of the season. “Bring me sunshine....” 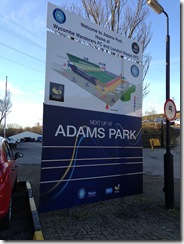 High Wycombe commonly known as Wycombe and formally called Chepping Wycombe or Chipping Wycombe until 1946, is a large town in Buckinghamshire. The name Wycombe comes from the river Wye, and the old English word for a wooded valley, combe. The existence of a settlement at High Wycombe was first documented in 970, as Wicumun. The Parish church was consecrated by the visiting Wulfstan, Bishop of Worcester in 1086. Wycombe also appears in the Domesday Book and was noted for having six mills. The town received market borough status in 1237, although the market has featured in the town since early in the 12th century. High Wycombe remained a mill town through Medieval and Tudor times, with the manufacture of lace and linen cloth but by the 17th and 18th century the paper industry was the most notable in High Wycombe. Wycombe's most famous industry, furniture (particularly chairs) took hold in the 19th century, with furniture factories setting up all over the town. Wycombe was completely dominated socially and economically by the furniture industry and, consequently, there was considerable unemployment and social problems when the industry declined in the 1960s and many of the housing areas decayed into slum conditions. Many regeneration schemes have taken place since then with the town looking a lot more respectable now. However, In 2007, a GMB Union survey ranked the Wycombe district as the 4th dirtiest in the South East and the 26th dirtiest in the whole UK so there is still more work to do. 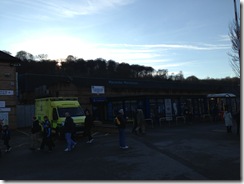 Wycombe Wanderers exact formation appears to have been lost to the depths of history, yet it is known that in 1887, a meeting held at the Steam Engine public house in Station Road saw the formation of Wycombe Wanderers. It is highly likely the club was named Wanderers after the famous Wanderers, winners of the first F.A. Cup fifteen years earlier in 1872. In 1895, the club moved to Loakes Park which they stayed at until 1990 and joined the Southern League a year later. After dropping out of the league and World War One, Wycombe joined the Spartan League in 1919 and won it in successive seasons and so promptly joined the Isthmian League in 1921. During their 64 years in the Isthmian, they won the FA Amateur Cup in 1931 and seven Isthmian League titles. Crowds however had started to drop by the 1980s so after finishing 3rd in the league in 1985, they finally joined the Gola League (later known as the Football Conference) but were promptly relegated on goal difference. After regaining their Conference place in 1987, the club consolidated under Jim Kelman before an embarrassing FA Trophy defeat to the Met Police saw him asked to resign. 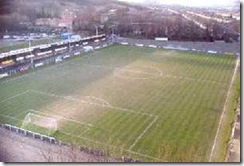 This allowed Martin O’Neill to come in as boss and start the most successful period of Wycombe’s history. They moved to their new ground of Adams Park in 1990 which is a great venue, helped today by extra income the club receive from the groundshare with rugby side London Wasps. The ground is dominated by the large Frank Adams Stand that is two tiered and has the hospitality boxes in. The Dreams Stand is usually home to the away supporters, but we were placed in the North Stand for this game right next to the media people. Finally, the West Terrace is where Wycombe’s “louder” fans stand in a small, shallow standing area. O’Neill’s Wycombe finally achieved promotion to the Football League in 1993 and then continued their brilliant form by winning the Division 3 play-offs the following season. O’Neill’s final season saw them finish 6th in Division 2 before he took the Norwich City job. They survived at D2 (only just) for a while and even had a brilliant FA Cup run in 2000/01 when they reached the semi-finals after Roy Essandoh’s last minute winner at Leicester City. They finally were relegated in 2004 and this started a period of constant yo-yoing between the two divisions, including last season when they finished 21st in League One and were promptly relegated. 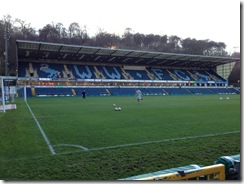 A few people had tipped Wycombe to make an instant return to League One this season and I had watched them on the opening day when they stubbornly held out against Watford in the League Cup until an extra-time winner cost them a place in the 2nd Round. They didn’t improve at the start and with the club around the relegation zone, Gary Waddock was sacked in September and player/boss Gareth Ainsworth took charge. Ainsworth has overseen a small recovery and were going into this game just behind Morecambe in the table, but away from the relegation zone. Since that glorious August day in Devon, Morecambe yet again have become consistently inconsistent. Reaching the 2nd Round of the FA Cup was a minimum requirement and while losing away to League 1 Coventry City looks ok, the Shrimps on the day probably deserved more. Despite this, awful defeats to Plymouth and Rotherham have disrupted their season and they were coming into this game on some reasonable league form. A win against AFC Wimbledon coming after a tanking by Northampton. Morecambe didn’t have a good record against the home side but we hoped for the best. 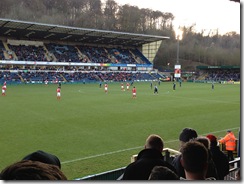 As the game kicked off, it was all so apparent that Morecambe were still on the team bus and the home side blew them away early on. The pace and movement of Joel Grant and Dean Morgan gave our defence all sorts of problems while the midfield was just getting bypassed. The tone was set in the first minute when a Barry Roche clearance hit Morgan and trickled just wide. Roche saved us though just a few minutes later when Stuart Lewis was put through on goal and his first shot hit the base of the post and his rebound was excellently saved. Morecambe continued to live dangerously as they allowed Grant to sidefoot wide from 5 yards on 10 minutes. Wycombe’s goal was always going to happen though and it was no surprise when they did take the lead on 22 minutes. Morecambe had a freekick on the edge of the Wanderers penalty area but Jordan Mustoe’s delivery was poor and the ball was cleared back to Andrew Wright. His header was a disaster as he launched it behind him to allow Morgan to sprint away and place the ball past Roche. Nobody should concede a goal from their own freekick, nobody. By this time Roche had been injured in the warm up and this niggle had been made worse by Dave Winfield clattering into him early doors, but he still had to make saves from Winfield and Morgan. The game then took a twist on 41 minutes. Wright was taking the ball forward when Grant made an awful studs up challenge. Ref Andy D’Urso sent him off much to the disgust of the home fans. They responded by abusing the Morecambe bench and Wright for “faking it”. This was despite Wright’s shinpad broke in half as a result of the challenge. Keep it classy Wycombe. This game now had a spicy element with Wycombe’s deluded sense of injustment. 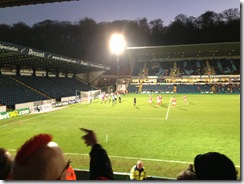 Morecambe came out more attacking (and in a better shape) for the 2nd half but still found themselves 0-2 down within 5 minutes. Morgan received the ball on the right and skipped past some half arsed challenges before powering the ball past sub goalie Andreas Arestidou. This now looked game over by Ainsworth made the bizarre decision to start playing far more defensively despite the problems they caused Morecambe when they went forward. This decision was proved to be the wrong one almost instantly as while home goalie Jordan Archer made a good save from a Gary McDonald drive, the resulting corner saw an unmarked Richard Brodie head home to make the last 30 minutes of the game interesting. By this point Lewis Alessandra had come on and was beginning to tear the home defence apart with help from Kevin Ellison, Brodie and Izak Reid. On 68 minutes came another talking point as Reid made a late challenge on Stuart Lewis, which looked similar to Grant’s in the 1st half. The 56 of us in the away end expected a red card but D’Urso only gave Reid a yellow. As you can imagine the Wycombe fans were delighted with this but I can only think D’Urso thought this was more of a 50-50 challenge than Grant’s. Credit to Jim Bentley for subbing Reid instantly, which was a shame as he had been excellent up until that point but Jack Redshaw came on. Ellison hit the post and Brodie had a goal disallowed for offside as Morecambe were pushing more and more for an equalizer as the home side offered nothing late on. The equalizer came in the first minute of 6 that had been added on. A deep ball into the box found Nick Fenton at the back post whose header found 5ft 6 Redshaw and he powered a header past Archer. It had been a while since I celebrated a goal this much but this was brilliant. There was still time for for another talking point as Wycombe had a goal disallowed on 95 minutes. Bruno Andrade received the ball in an offside position and so Morecambe were awarded a freekick. What happened next was he played in Scowen who was taken out and Andrade ran in scored. This was all moot however as Andrade was offside in the first place. Wycombe fans didn’t realise this however as they blamed D’Urso for another poor decision and even the official match report stated, “However, for some reason D’Urso blow up for offside despite there being no advantage.” You can tell this is a rugby union town can’t you. Go back and learn the rules. 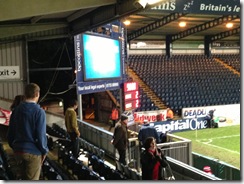 This was a brilliant point for Morecambe that was partly down to Wycombe throwing it away but the 2nd half performance from the Shrimps deserved this. A point in their next game against Oxford provides a good base for some tough games coming up over Xmas and New Year. Wycombe is a town that should really stick to rugby union. Some of the comments I heard on the walk back to the station and then read over the next few days were really laughable. In fact a fair few were probably at this game only because they didn’t want to make the trip to Bayonne in France to watch Wasps. The 2.6 mile walk back to the station was a delight as I had a beaming smile on my face thanks to Redshaw’s goal. The return game at the Globe Arena on 1st April will be a spicy one!

Photos from Wycombe Wanderers vs Morecambe

- Value for money: 3/10 (remember what league you are in Wycombe)

- Atmosphere: 4/10 (quiet clapping and an occasional drum doesn’t add much) 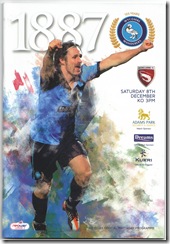