Competition: Capital One Cup 1st Round

That opening day of the season is a special one for football fans. Turning up for the game full of hope and excitement for the new season ahead, looking forward to seeing the new signings or new tactics the manager will play. And then the game kicks off and your side are 3-0 down inside 20 minutes. All that excitement gone. But at least there are still 35+ games of the season to go! While the Olympics are here, the football season has had to readjust and so some teams were actually playing a Cup competition on the “opening day”. No second chances here, lose and you were already out of the cup. One of those sides were Watford. 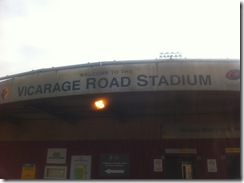 Watford is is a town in Hertfordshire, situated 18 miles northwest of central London but within the bounds of the M25 motorway. The borough is separated from London to the south by the urbanised parish of Watford Rural in the Three Rivers District. Watford stands on a low hill near the point at which the River Colne was forded by travellers between London and the Midlands. This route, originally a pre-Roman trackway, departed from the ancient Roman Watling Street and headed for the Gade valley. The modern High Street follows the route of this road. The town probably originated in Saxon and was first mentioned in an Anglo-Saxon charter of 1007. It was located on the first dry ground above the marshy edges of the River Colne. The settlement's location helped it to grow, since as well as trade along this north-south through route it possessed good communications into the vale of St Albans to the east and into the Chiltern Hills along the valley of the River Chess to the west. In 1100 Henry I granted a charter to Watford to hold a weekly market. Watford remained an agricultural community for many centuries until the Industrial Revolution brought the Grand Junction Canal in 1798 and the London and Birmingham Railway in 1837. These developments gave the town excellent communications and stimulated its industrial growth during the 19th and 20th centuries. The Grand Union Canal, allowed coal to be brought into the district and paved the way for industrial development. Today the town has major links with London as a commuter town as well as to other parts of Hertfordshire with its good rail and road links. 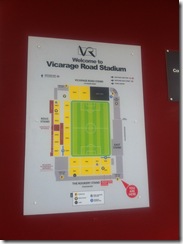 Watford FC were originally formed as Watford Rovers in 1881 and held home games across several parts of the town. They became part of the West Hertfordshire Sports Club in 1890 and were renamed to suit that in 1893 before joining the Southern League in 1896. They merged with local rivals Watford St Mary’s in 1898 to become the Watford FC they are known as today. After the First World War (during which they held the Southern League title due to the suspension of the league during wartime) they joined the Football League Third Division South and between the wars they floated up and down the table, only having to apply for re-election once. After the restructuring of the league in 1958, Watford were placed in Division 4 which they promptly won before finishing 3rd in Division 3 – their highest ever finish at the time. When Elton John took over as Chairman in 1976, his dream was to get Watford to the 1st Division. In came Graham Taylor and up went the Hornets as they achieved this aim in 1982, despite being in Division 4 in 1977. Probably the greatest ever Watford side is the one that finished 2nd in the top flight in 1982/83 which included league top scorer Luther Blissett, John Barnes and ensured UEFA Cup qualification. 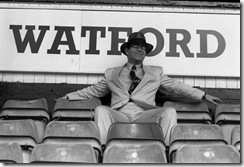 What goes up must at some point come down though and after Taylor left in 1987, Dave Bassett came in and promptly took them down after Barnes was sold. (Bassett didn’t even survive the season) Despite just missing out on an instant promotion back the next season, Watford slowly moved towards another relegation and were confirmed in Division 2 in 1996. Taylor came back (again!) and two successive promotions meant they were in the Premier League for the first time under its new name. Despite beating Liverpool early on (who doesn’t?) Watford finished bottom and Taylor retired, allowing Chelsea legend Gianluca Vialli to come in. Despite the wage bill going up by £4m, he only managed to finish 14th and was promptly sacked. While the ITV Digital collapse nearly finished Watford off, they came back under Aidy Boothroyd into the Premiership but were relegated after one season again. Midtable finishes have been the norm since then and although Sean Dyche proved a lot of people wrong (including me) by leading them to an 11th place finish last season, he was a victim to the takeover by the Pozzo Family of the club and was sacked. Meaning this was new boss Gianfranco Zola’s first competitive game in charge of the club. 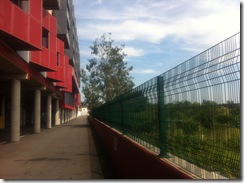 One area the Pozzo Family could improve upon if they start to splash the cash is Watford’s ground of Vicarage Road. While delightfully run down in some places, in others it is a shithole and will need work on it. Now only 3 sided due to Health & Safety closing down the East Stand to general spectators (although the media are still allowed in), the other stands are all seated with only the Rous Stand being two tiered. (And including an imcomplete SW corner – dunno if this work is now back on?) The old Main Stand has now been removed from sight with white sheeting over the unused seats and the roof removed. Hopefully the Pozzo’s can get to work on this side as it seems a tad strange at the moment. It has been home to Watford since 1922, so it celebrates its 90th birthday this year and is still a lot better than the sedate new grounds that many FL sides are now building. 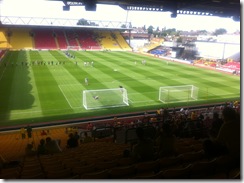 In town for this game were the dictionary definition of a “yo-yo” side, Wycombe Wanderers. Since winning promotion to League 1 in 2009 by a single goal, they have gone down, come up and gone down again to find themselves back in League 2. For boss Gary Waddock it’s a good thing the Wycombe board are so forgiving as two relegations at a club, would normally mean you would be looking for another job. His mandate however is quite clear this season, promotion. So if they start to look like that will not be achieved, Waddock will most likely be off. Wycombe brought a decent number from Buckinghamshire and made themselves heard throughout with the aid of a drummer. (Got to love ‘em!) 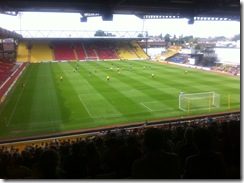 The game started off so well, both sides playing some decent stuff and both sides missing great chances. Firstly Watford’s Jonathan Hogg fired a diving header wide from a Carl Dickinson cross before Wycombe went up the other end and while home goalie Almunia did well to save Joel Grant’s low shot, he was very lucky to save Richard Logan’s effort that went up and looped just past the post. And that was it for the first half in terms of chances, it was that bad. The only other note of point was the sad injury to Wycombe defender Marvin McCoy who had to be stretchered off with a fractured fibula and will now be out for 3 months. The second half promised so much and delivered so little. It was clear to see both managers were taking this as a final pre-season game and so the atmosphere also showed as both sets of fans were fairly muted too. Logan had another chance for Wycombe as he fired just wide from distance while Nikki Bull was only really troubled when Watford started playing, in injury time. It was 0-0 after 90 minutes so we had the “bonus” of extra-time. 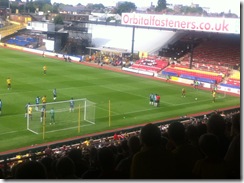 Some people actually left before ET kicked off and for the first time, I don’t blame them. Watford did start to show a little bit more pressure as Wycombe tired. When it looked like I’d have to stay awake for a penalty shoot out, Watford broke down the right through Matej Vydra (who was one of the best players on the pitch) and his low cross beat Bull and found Chris Iwelumo who managed to just fire the ball over the line and in. (He does have previous missing good chances) Wycombe had 10 minutes to find an answer, but didn’t ever look like scoring. After 120 minutes we had 5,000+ people asleep and Watford into the 2nd Round of the League Cup this season. 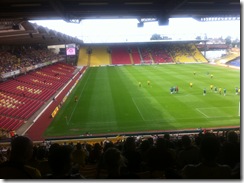 It’s hard to judge how both of these sides will do this season based on that performance as both clearly used that game to test tactics and players ahead of the league season. For Watford, Zola wants his side to play a more attacking and passing approach which is fair enough. But is the side good enough to play this way? On this showing, it appears not so the Pozzos will have to get some Euros out. Wycombe should be top half of League 2 this season but with Fleetwood and Rotherham probably occupying two of the 3 automatic promotion spots, can Wycombe get the 3rd? Doubtful.

Photos from Watford vs Wycombe

- Ground: 6/10 (delightful ramshackle in parts, shithole in others) 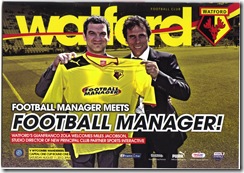