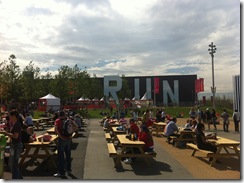 Described by the Olympics as: Handball was developed in Denmark, Sweden and Germany in the late 19th century. Originally played outdoors as field handball, the sport first appeared at the Olympic Games in 1936 and the indoor version in 1972. Played on a court of measuring 40 x 20 metres, (the largest of any indoor ball sports at the Games) Handball features two teams of 7 players passing and dribbling a small ball with their hands. The aim is to throw the ball into the opposition goal.

Described by myself: Pass ball, catch ball, throw it in goal. At rapid pace. Maybe a couple of times bounce the ball too. “Tackling” seems to be anything goes. For the female game it also appears mandatory to have one stunning player that diverts male attention away from the game. (Unless you are Denmark and then its the whole team) 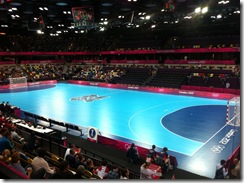 The venue: The Copper Box is a permanent venue and was built with sustainability as a priority. Such as, rainwater collected from the venue’s roof will be used to flush toilets and reduce water use at the venue by up to 40%. The glazed concourse level that encircles the building will allow visitors after the Games to see the sport taking place inside and illuminating the venue when lit at night. The top half of the venue is clad in 3,000 square metres of external copper cladding – mostly recycled – to give it a unique appearance that will develop a rich natural colour as it ages.

After the games, The Copper Box will become a multi-use sports centre for community use, athlete training and events, operated by Greenwich Leisure Limited. Its flexible design and retractable seating mean it will be suitable for activities ranging from international competition to community sports, and for a wide range of indoor sports. A health and fitness club with changing facilities and a cafe for use by the local community are also planned. 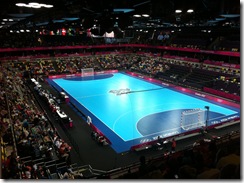 The experience: This was actually a massive bonus as I was a guest to this session courtesy of Stuart Hyde. I was tempted to apply for the Handball tickets in the first ballot but it just missed out in favour of BMX, (Which in the end I was unsuccessful for) so a big thanks to Stu for the spare. Time Out London described the Handball session they had seen as “wandering into a House party” and the thumping music that hits you when you go inside is testament to that description.

It’s actually a small venue with only a 6,000 capacity so regardless of where you are sat, you have a great view of the court. You can also get some good snaps when you first go into the Arena by the seats that have a fantastic view of the court. (Probably the ones that cost £££s) As handball is an extremely fast pace sport, matches can change at anytime and so the intensity is felt in the atmosphere. The loud music and pre-match presenter/eye-candy are both also present meaning the Copper Box can get thumping and feel a lot more than the c.6000 that are in there. 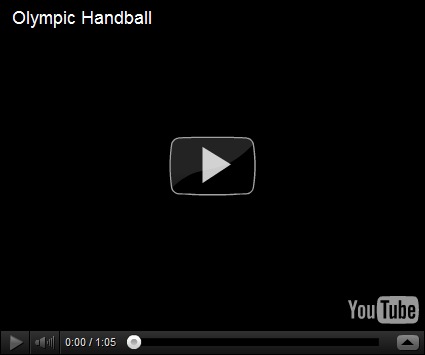 (Spain vs Denmark come out)

The matches: Stuart had managed to blag some women’s handball meaning most of the “research” I had done on the men’s tournament before hand wasn’t applicable here. What was the bonus though, was the amount of stunners on show and how quality handball players they all were too. Both games were fairly tight, with Game 2 being possibly described as a classic with the contest only being settled less than a minute before the end. I’m keen to watch more handball so will be looking out for it on my travels in the future. 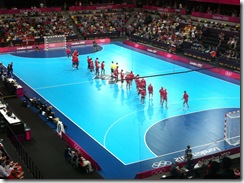 Denmark’s beauties sadly lost this contest to a clinical Spain but could have scraped a win had Ann Grete Norgaard scored more of her penalties that Spain gave away. 14-9 at HT, Spain looked to have a comfortable win until Denmark came back at them for the 2nd 30 minute period. It got worse for Spain when walking disaster Francisca Alberto was sent off for launching a penalty straight into the Danish goalie’s face. The Danes scored 3 unanswered goals before Spain steadied themselves and did enough to win. Much to the sadness of heterosexual males across the planet, Denmark failed to qualify for the knockout stages, while Spain are currently awaiting their semi-final match. 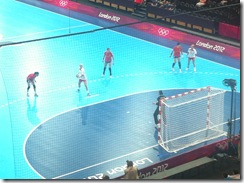 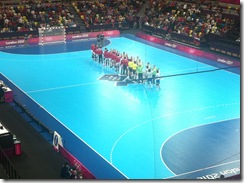 According to the official attendance figures, around 400 people left after the first game and missed this. Idiots. This was brilliant. The 1st half was nip and tuck with both sides have good spells before letting the other side back in. At 15-15, the 2nd half promised a lot and delivered as Croatia began to push forward and at 29-24 with 5 minutes to go it looked like the Croats would take a famous win. Then they lost their bottle (or Izgubili bocu in Croatian) and the Russian scored, and again and again and again. With just 1m 20s to go it was 29-28 and the 4,098 in the Copper Box were on the edge of their seats as both sides went for the goal they needed. Andrea Penezic got the party started back in Zagreb when she scored with 40 seconds to go. I also got to see the future Mrs Travelling Fan in Croatia’s Dijana Jovetic. (Marko is a lucky man) 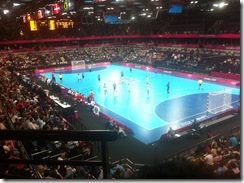 Overall: When I do eventually pull my finger out and start going back to mainland Europe again, I will try and see some Handball games as this was brilliant. Two excellent matches in a great venue that will be used by the local community after the Games. This was one house party I was delighted to be a part of. 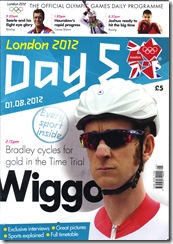