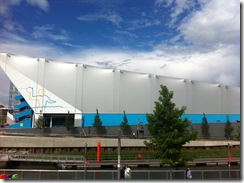 Described by the Olympics as: Water Polo developed during the 19th Century as an aquatic version of rugby, played informally in rivers and lakes. The version of the game that survives today is closer to Handball. Played by teams of seven in a pool with a goal at each end, Water Polo is a thrilling spectacle. Matches are divided into four periods of eight minutes, and each team has just 30 seconds to attempt to score before the ball is returned to the opposition.

Described by myself: A brutal and punishing sport that appears to allow most things to go unless you punch someone. Actually entertaining when you consider the technical side of it all. 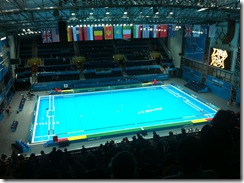 The venue: The Water Polo Arena is on the south-east corner of the Olympic Park right next to the Stratford Gate entrance. Next to the Aquatics Centre, it is the first dedicated Water Polo venue to be built for an Olympic Games. The venue has a 37m competition pool plus a smaller training pool, and capacity for 5,000 spectators.

To give visitors to the Park a clear view, the architects proposed a unique sloping design, which slopes upwards from 6m to 25m. It also means the referee’s raised table used in Water Polo does not obscure the view of spectators, who sit on the opposite side of the pool. The Water Polo Arena is a very sustainable venue. Many of the parts used in the build, such as the temporary seating, have been hired so they can easily be returned and reused after the Games. The silver skin of the venue is made from an environmentally-friendly PVC that can also be recycled. After the games, the venue will be dismantled and the materials will be used across other venues and projects. 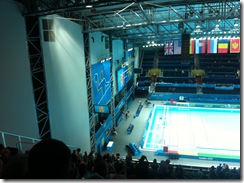 The experience: Along with beach volleyball, I really didn’t know what to expect for this. I had no idea on the rules of water polo either so I did expect to be utterly confused for the most part. While not the OTT atmosphere that suits beach volleyball so well, water polo was slightly more sedate, but this suits it as it really is a different style. The crowd can get going though especially as only one side of the stadium is for paying spectators. Video below is just before the start of the GB vs Romania game. 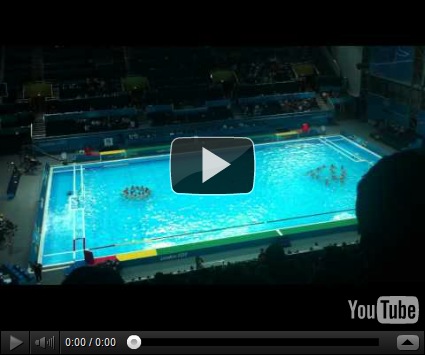 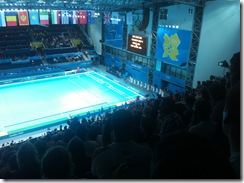 The matches: Water Polo looks extremely difficult to play and extremely physical so kudos to the four teams I saw out there for my session. I was also lucky to see in Match 2 a really tight game featuring two sides who should be competing for the medals. Another bonus was beginning to understand the rules as it went on! 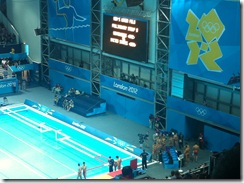 This was GB’s first Water Polo appearance at the Olympics since 1956 and it sadly showed as the more experienced Romanian side easily dispatched them. Despite a reasonable start from GB, once Romania’s Alexandru Matei gave his side the lead on 3 minutes, they never looked back. GB did have it at 2-1 at the end of the 1st quarter thanks to a Rob Parker penalty but a 0-4 2nd quarter ended the game for them. It was a good experience for GB though as they lost every game but hopefully they can take this on and improve in the future. Romania also lost every other game they played in the tournament and went out in the group stages. 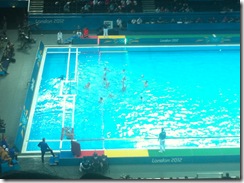 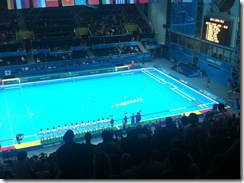 A much more tighter game and was great to watch too as both sides had fans that made their voices heard in the Arena. After a tight first quarter when Aleksandar Ivovic and Ryan Bailey traded goals, USA took the 2nd quarter 3-1 to make it seem that they had the game tied up. After a tight 3rd quarter that was even, it was 6-4 going into the final 8 minutes and when Vladimir Gojkovic scored with 48 seconds remaining, Montenegro seemed on for a draw, but the US just hung on. Both of these sides unsurprisingly qualified for the Quarter-Finals where Montenegro play Spain while the US go up against Croatia. 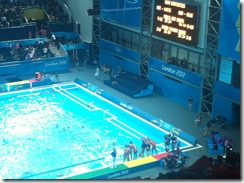 Overall: Another enjoyable day in the Olympic Park and then in this Arena watching a sport I previously had no clue about. While this venue will be dismantled after the Olympics, maybe some young onlookers will be tempted to take up water polo after! Olympic Legacy and all that… 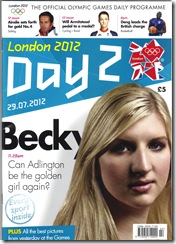