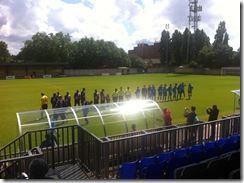 Having moaned last month about no interesting friendlies this season, Dulwich Hamlet pulled this game from left field and as 7th Division Belgian sides don’t play in the London area too often. I made the effort to get up to Champion Hill and watch this.

RFC Temploux-Suarlée come from the Namur region of Belgian and having won the 4e Provinciale B division last year, they will be playing 2012/13 in the Namur region 3éme provincial groupe A – which is Level 7 of the Belgian pyramid. This match was brought about due to the Dulwich Hamlet Supporters side playing an Anderlecht which included Temploux coach Nicolas Lucas. A friendship grew between the sides and even a party of 15 went to Dulwich’s game at Folkestone last season to see the Hamlet win 3-1. 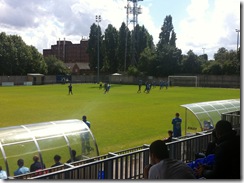 The Temploux players, officials and families (around a group of 30 came over) all paid for this trip themselves after Hamlet agreed to play a pre-season friendly against them as they warm up for another tilt at Isthmian Division 1 South. I was interested to see how a Level 8 side in England matched up against a Level 7 side from Belgium with my only previous experience of Belgian football (live) was RRFC Montegnée who play 3 levels higher than Temploux. 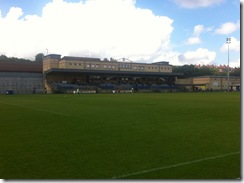 As you can see from the score, the answer was the Belgians did not match up well at all. Despite a promising start where Temploux kept the ball well and passed it around their half ok, when they went 0-1 down to a brilliant own goal, (which someone has got on film perfectly here) the floodgates well and truly opened. The Belgians were missing some key players from last season and had played some midweek cup games as well as receiving a tour of London the night before this game. Those told as Dulwich raced into a 6-0 lead at HT with all of the goals coming from good runs and a well placed attacker to finish the move off. In fact, had it not been for Temploux goalie Stacey Lombet, the score could easily have been 10-0 at HT. Dulwich added another 4 in the second half to take the final score to 10-0 (my biggest ever score). Temploux got a shot away around 70 minutes in which was comfortably saved, however the striker cheered which was nice to see as they were taking the spanking well. 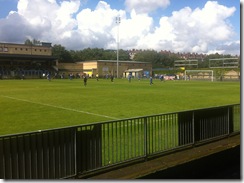 While it wasn’t particularly enjoyable to see a team getting hammered that much, it did leave me with the question, how bad is that level of Belgian football? Dulwich Hamlet may go over to Namur and play there in the future which would be another sign of the gap between the two sides. 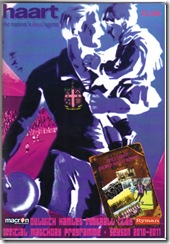 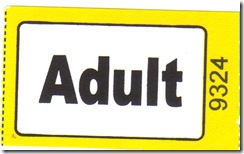