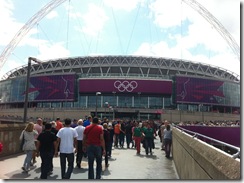 Described by the Olympics as: Football was introduced as an Olympic medal sport at the London 1908 Games, 22 years before the first World Cup. The sport has featured at every Games since, except Los Angeles 1932. The aim of football, to score more goals than the opposition, is both simple and universally known. (You think?)

Described by me as: While the women’s tournament is a full international one with the top teams and players, the men’s is essentially an Under 23 tournament with some ringers. Defences not really any of the team’s strong points either. 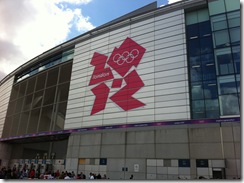 The venue: While Olympic Football was actually taking place across the country with games being held in Newcastle, Coventry, Cardiff and Glasgow, I was at London leg of the tournament, being at Wembley Stadium. The 90,000 capacity ground is actually the biggest stadium venue being used at the Olympics (with the actual Olympic Stadium “only” being 80,000) and the home of both finals.

I’ve previous described Wembley before when I attended the 2012 FA Vase Final back in May but for this game over 80,000 people were here compared to the 5,100 that attended the Vase Final. I was interested to see how different a venue it feels when there are 16x more than I had previously experienced. The top tiers where I was sat have an excellent view and the way in and up is still well organised. Having experienced both the bottom and the top, I can easily say Wembley is a decent venue. 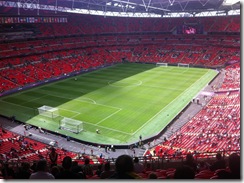 The experience: I go to a lot of football matches, this was in fact my 161st game. And I was sat next to a lot of people who had probably never been to a game in their life. This was ok though as that is like me turning up at a water polo or handball match and pretending to know what I was talking about. What did annoy me slightly however were the groups of people who turned up and didn’t even watch the game. Which was a real shame as the game (see below) turned out to be a cracker. Also, the Mexican fans near me wanted to start a Mexican wave every 2 minutes which became annoying too, rather quickly. Not my best Olympic experience. 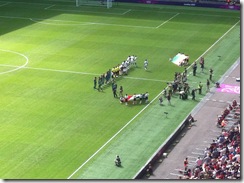 The match: Only one for this session, rather than the bonus game some people got in the group stages of the men’s and women’s competition. (Would 2 games be too much though? Especially if game #1 was dirge)

Having watched a couple of the Olympic football games prior to this on TV, it was clear that a weakness for every team taking part in this competition was defence. That was extremely clear after watching 120 minutes of these two sides as offensively, both were quite decent but made some dreadful decisions and errors at the back. Mexico came out of the blocks well and hit the bar after 3 minutes through Marco Fabian, this coming from a defensive mix up from Senegal. They were undone on 10 minutes when a Dos Santos free kick was headed in by Jorge Enriquez as their defence went missing again.

Senegal came back though and Mexican goalie Jorge Corona had to palm a header off the line to stop an equalizer and then had to be brave and punch a cross clear before Senegal’s big men (and they were huge) could score. The rest of the 1st half was extremely entertaining without too many chances being created, but I said on Twitter at HT, there would be more goals in the 2nd half. 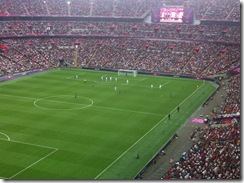 And I was right! Mexico seemed to have wrapped up the game on 62 minutes when Senegal had many chances to clear the ball and couldn’t before Javier Aquino was found at the back post to rifle the ball into the top corner. Game over then. Well no, actually, as to my surprise Mexico found a way to collapse and let Senegal back in. Firstly, they broke on 69 minutes and a Pape Ndiaye Souare cross found Moussa Konaté unmarked to head home and after wasting a couple of other chances, Ibrahima Balde powered home another header from a corner (again, completely unmarked) to send the game into Extra Time. 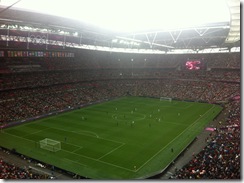 It was really hard to call it in ET and yet to my amazement, loads of people (mainly families) actually left just before the last 30 mins! (Transport wasn’t an issue here, so that excuse can jog on) Mexico again started better than Senegal and after the Senegalese defence got away with a couple of errors, they made a fatal one on 98 minutes to hand the game back to Mexico. God only knows what Papa Gueye was doing fannying around on the edge of the area, but he lost the ball to Giovani Dos Santos (remember him?) who showed his calm and finished well to make it 3-2. If that was a bad goal to concede then Mexico’s 4th on 109 minutes was even worse. A really poor header back by Ba was latched onto by Raul Jimenez and while Senegal goalie Ousmane Mané kept the first chance out, he could nothing to stop Hector Herrera heading into an empty net to ensure Mexico progressed to a semi-final meeting against Japan.

- Atmosphere: 3/10 (Mexican waves do not add to atmosphere) 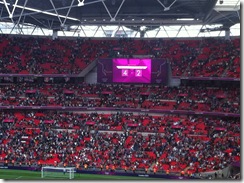 Overall: While the atmosphere and day trippers weren’t really my thing, I was lucky to see 120 minutes of excellent football played out by some players who will surely go onto bigger things. Mexico won their semi-final against Japan (3-1) and will take on the overwhelming favourites of Brazil in the gold medal match, good luck to them. That’s it now for the Olympics – I’ve loved my sessions and if I don’t get to anything in 2016, then 2020 is a must! Some Paralympic action coming soon though.

Photos from Mexico vs Senegal 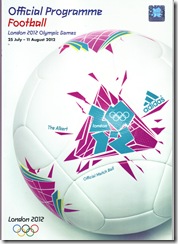