It had been a long time since I saw my Morecambe boys in action in the flesh. Playing in a predominantly Northern League means that it’s not that often The Shrimps come down to a game I can get to easily. Sadly I can’t make the away games at Barnet or Gillingham coming up, so it was off to Aldershot to join the hardy bunch of Morecambe fans coming down and I even took a work colleague along to see some “total football” too. 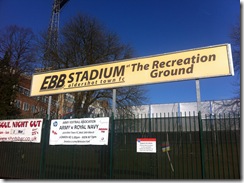 Aldershot is a town in the English county of Hampshire, located on heathland about 60 km southwest of London. Aldershot today is known as “the home of the British Army” and this led to rapid growth from a small village to a Victorian town. The name may have derived from the name of "Alder" trees found in the area (Alder-holt meaning copse of Alder trees), indicating that it was a wet, boggy place. Aldershot, Alreshete, dates back to an Anglo-Saxon settlement and was included in the Domesday Book of 1086. In 1854, at the time of the Crimean War, the heath land around Aldershot was established as an army base with Aldershot at its centre. This led to a rapid expansion of Aldershot's population going from 875 in 1851, to in excess of 16,000 by 1861 (including about 9,000 from the military). The town continued to grow, reaching a peak in the 1950s before declining back to its current state today. I’ll leave chatting about Aldershot with a Rudyard Kipling poem that mentions the town in it. Here is a wee bit of “Gunga Din”

“You may talk o' gin and beer
When you're quartered safe out 'ere,
An' you're sent to penny-fights an' Aldershot it;
But when it comes to slaughter
You will do your work on water,
An' you'll lick the bloomin' boots of 'im that's got it.” 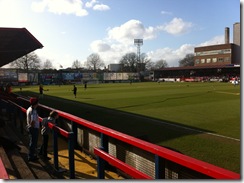 25th March 1992 is a dark day for Shots fans as that is when the original Aldershot FC finally lost the battle against their debts and were liquidated and removed from the league after a 2-0 away defeat at Cardiff City. The original club had been founded in 1926 and after being elected into the league in 1932, played all of their days in the basements never finishing higher than 8th in Division 3. The new club of Aldershot Town were formed that year and started in 1992/93 in the Isthmian League 3rd Division, with a new badge having a phoenix rising up on it. A double promotion quickly happened to take them to the Isthmian 1st Division which they finally won in 1998 with a home win over Berkhamsted Town with a crowd of 4,289. 2001/02 saw them win the Isthmian Premier under the guidance of Terry Brown and in their first season in the Conference Premier they reached the Play-Off Final, only to lose on penalties to Shrewsbury Town. They then slightly stagnated in the Conference before coming under the leadership of Gary Waddock in May 2007. His first season in charge saw them smash the Conference to pieces by winning the league with 101 points and a place “back” in the Football League for Aldershot. Since then they have been floating around upper mid-table to the lower end of the division and even made the play-offs in 2009/10, but lost on agg to Rotherham United. 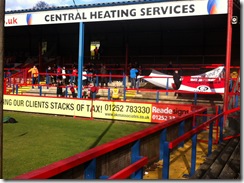 Waddock and even his replacement Kevin Dillion have long gone as former nomad striker Dean Holdsworth is now the Aldershot Town boss. After a slow start to the season where a relegation battle looked on, they have picked up ok and were coming into this game in 13th, going for their Football League record of consecutive wins (6). Morecambe, *sigh*, had sunk like a stone since I saw them storm Dag & Red’s Victoria Road in September which sent them a few points clear at the top of the league. An awful autumn saw automatic promotion dreams go and now it really is touch and go if Morecambe will even sneak a play-off position this season. Since stopping the rot and the threat of relegation, an inconsistency has now emerged as best summed up in the two games leading up to this, beating promotion challengers Southend before losing to non-league bound Dag & Red. Consolidation and trying to crack a good run before the start of next season is most likely the best option for the Shrimps now and so I hoped they performed for the final time I would see them this season. 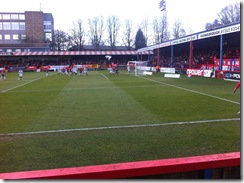 The game kicked off to a good atmosphere due to the Aldershot fans behind the goal continuing their simple “ALDERSHOT, ALDERSHOT” chant to the Piranhas “Tom Hark”. While that was good for a few minutes to try and get the game going at a good tempo, 20 minutes later and they haven’t even changed the chant was quite repetitive. To be fair, on the pitch there was nothing to get excited about as Aldershot were still feeling their feet and the Morecambe with no confidence seemed to have turned up as they were on the back foot straight away. The away side did have the first chance of the game though as a corner found Stewart Drummond all the way at the back post but he missed an easy chance as he skied it over. Players from a higher league would have buried that and that’s the difference. While Morecambe had a lot of the ball, they could do not much with it as Aldershot started to boss the game and pepper Barry Roche’s goal with shots. Danny Hylton was the first to fire one over before he then hit a shot wide as Morecambe were being pushed back. The opening goal on 25 minutes was an awful one for the Shrimps to concede. A pointless free kick was given away around the half way line which was taken quickly. A simple pass to the right wing was crossed in from Aaron Morris and Guy Madjo powered a header past Roche and in. Nothing classy, just simple. Morecambe should have equalised 5 minutes later when another corner came in and caused problems. Drummond was found short on the edge of the area but his shot was cleared off the line (with a suspicion of hand ball?) and cleared to safety. The rest of the half was a non-event as both sides struggled to dominate. 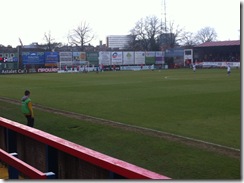 2nd half saw Aldershot again have the better of the play but their lack of a 2nd goal was mainly due to the limited talent in their squad which made it even more frustrating that Morecambe couldn’t find a way through. They can play a lot better than this, I know, I’ve seen it but at least my journey was only 50 minutes to get here rather than 6 hours. Peter Vincenti had the first real chance of the 2nd half when his long range effort made Roche work to keep it out, but the 2nd half never really got going and 1-0 looked like the way it would finish for some time. Morecambe frustratingly played long balls up for the last 15 minutes which were constantly cleared by a towering Aldershot defence. Izak Reid had our best chance but he scuffed at it and has failed to live up to the promise he showed at Macclesfield all season. Late on, Aldershot were rightfully down to 10 when Troy Brown was sent off for a poor two footed challenge which the home fans had the audacity to question. They were never troubled though and took the 3 points with relative ease. 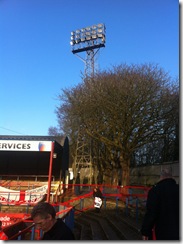 A really disappointing result from Morecambe’s point of view. Aldershot aren’t that good but looked to easily have enough to hold the Shrimps off for this game. Since this game the frustrating inconsistency has continued with a win over Cheltenham before an awful loss to Hereford. Not many games now left to go for Morecambe to sneak a play-off spot and it looks like it will be the game away to Oxford United will be the key. The Shots had actually lost their way since this win by losing two, but picked up a win over Bradford to keep them level on points with Morecambe and in the play-off sniff. The Recreation Ground is a decent venue and as you can see from the pictures, I had a lovely day to come and watch here. Who knows what far flung outpost I will see the Morecambe boys rock up to next, but here’s hoping we can sneak a play-off place at the end of the season.

Photos from Aldershot Town vs Morecambe 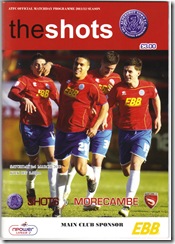 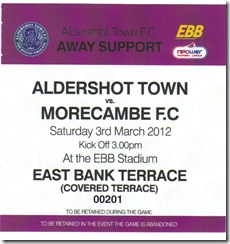