The beauty of the clocks going forward and the advent of the Spring season is that midweek football looks extremely more appealing again. Rather than standing in a ground and just trying to keep warm, you can actually enjoy the football and the surroundings. It was also timed perfectly to see the conclusion of the interesting looking Skrill South promotion chase as candidates #1, Bromley, were at Staines. 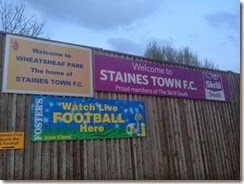 Staines-upon-Thames (or Staines) s a town on the River Thames in the borough of Spelthorne in Surrey. There has been a crossing of the River Thames at Staines since Roman times as when the Emperor Claudius sent the Romans into Britain in AD 43, they settled in Staines the same year. Soon afterwards the first Staines Bridge was constructed to provide an important Thames crossing point on the road from Londinium. The name Staines comes from the Old English, and means "the place at the stones". Between 1642 and 1648 during the Civil War, there were skirmishes on Staines Moor and numerous troop movements over Staines Bridge. The parish remained largely agricultural until the mid-19th century when it was a regular staging post with coaching inns. More modern history includes produces linoleum and Lagonda cars, but it is now more famously known for the character Ali G and his Staines Massif. It is also rumoured that Ali G’s popularity was a major reason for the town council changing the name of the place to Staines-upon-Thames to try and reduce the association with Sacha Baron Cohen’s character.

(Any caption here would be too easy…)

Staines Town FC were founded in 1892 and played under various names such as Staines FC, Staines Albany and Staines Lagonda until they folded in 1935. Just before WW2, however the club reformed and were founding members of the Hellenic League in 1953. After doing well in both the Spartan League and Athenian League, they joined the Isthmian League 1st Division in 1973. After a quick promotion to the Premier Division, Staines spent a good 9 years up there before being demoted in 1984 due to ground grading rulings. Despite, coming back up, the club were relegated for the first time in their history in 1993 and then became a yo-yo club for a short period while their ground at Wheatsheaf Park was being worked upon.

Staines came back to a refurbed Wheatsheaf in February 2003 and won promotion back to the Premier Division that season. After play-off heartbreak the season before against AFC Wimbledon, Staines secured promotion to the Conference South in 2009 beating Carshalton Athletic where they have been ever since. Despite a good start in their first season at this level, finishing 8th in 2009/10, the Massive have faded over time and finished last season down in 18th, just 3 points off a relegation spot. 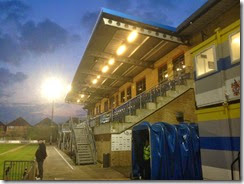 Wheatsheaf Park is said to be one of the most modern in the Skrill South (although, stated by a Staines fan) and it does look fairly impressive after its refurb in 2003. The Main Stand (see above) is the stand out part of the ground with its impressive views whilst also having a bar and Directors area attached onto it. Part of the upgrade at Wheatsheaf Park included the building of the Thames Club gym so the surrounding area and car park was extremely busy long before KO. Opposite the Main Stand is a smaller, low tiered covered terrace that is split into 3. Blocked by the dugouts for a large section of the ground, it wasn’t a particularly popular place to stand with even the Staines MASSIVE choosing to situate themselves in the Main Stand. Behind both goals were uncovered terraces with a few steps. Should Staines ever go up, these would be the first sides of the ground to be developed, although with one backing onto houses, it seems unlikely they could do that much. 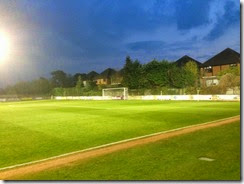 Having narrowly avoided relegation last season, Staines were looking fairly comfortable going into this game to not have a nervous April fighting the drop. Being in 12th position, 14 points away from the relegation zone, Staines could play out the final few games in midtable. Something they may have gone for at the start of the season. Although with the playoff pack seemingly all trying to avoid the final play-off spot, a late serge from Staines, with a game in hand could help them nab an unlikely place. Managed by former Wimbledon legend Marcus Gayle, he was trying to breed a young side in the league and while it looked beyond them this season, they could be ones to watch in the coming years. Especially as he clearly has been given time by the owners to make his mark. (A manager given time!?) 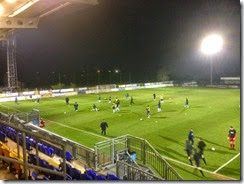 This match was due to be played in February, right in the middle of the floods that turned large parts of Britain into Atlantis and the programme was this rearranged game was the original one with an insert. The original insert showed Bromley, top of the league, with an 11 point gap. At one stage it was 15 points as they looked dead certs to win the league and be playing Skrill Premier football. However, a shocking March which saw them lose 4 in a row to Sutton United, Chelmsford City, Dover Athletic and Farnborough along with Eastleigh’s fantastic form which has seen 1 defeat in 9 saw Bromley lose the top spot in the table the weekend before. Yet, in another twist in the South title race, Eastleigh came to Staines and could only manage a 0-0 draw to give Bromley a 1 point lead at the top. Eastleigh though, still had two games in hand. 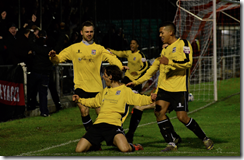 Despite the big difference in places between the two sides, from kick off it was clear that they were both evenly matched. Bromley obviously needing the win went for it with Staines happy to sit and soak up pressure before countering with the pacy wingers. Chasing the game too much seems to have hurt Bromley in recent matches and it did so again on 16 minutes after Sanchez Ming bombed forward down the right and his dangerous ball saw the Bromley defenders stand still to watch Jerson Dos Santos stoop a header past Joe Welch in the Bromley net. Bromley really really went for it from then as Staines seemed unable to get the ball forward that their early promise showed. The Saaf London club had a few sights on goal before equalising just before HT when Danny Waldren slid in from Ali Fuseini’s cross. A point was not good enough for Bromley and you felt the 2nd half would be a key 45 minutes in the title race. 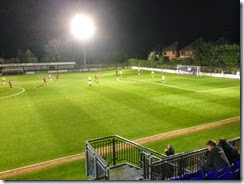 Bromley continued where they left off by peppering the Staines goal and forced Staines goalie Jack Turner into some excellent saves. One thing however the home defence did do well for the 2nd half was keep Bromley top scorer Bradley Goldberg quiet as he could not get into the game. Staines however with 20 minutes to go brought on Bajram Pashaj to try and get something better than a point that the club were barely hanging onto. Pashaj had already made a few darting runs late on as Bromley were throwing more and more men forward to try and snatch the winner that would be so crucial. Yet, it happened. On 89 minutes Bromley launched forward only for Staines to counter. Someone needed to bring Pashaj down and take the yellow card but they just kept back-pedalling as Staines got closer to goal. When someone did try and make a tackle, it was too late. Pashaj had already fed Staines top scorer Louie Theophanous who skipped past one tackle before firing a late winner against his old club. Staines were delighted as Bromley couldn’t believe they had actually lost this. Yet another twist in the title race. 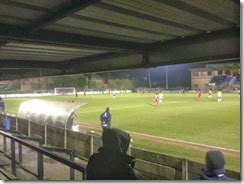 With Eastleigh winning that night 6-0 against Dorchester, they went back to the top of the league. However, both sides have not been on top form recently since this game with Bromley labouring to a 1-1 draw at Eastbourne Borough before a 1-0 defeat at Havant & Waterlooville means they are 6 points behind Eastleigh who have a game in hand. The Eastleigh boys haven’t been in great form themselves however and with the major crunch game between Bromley and Eastleigh coming up, that will probably decide if the title race is still on. Don’t forget Sutton United though as their usual end of season excellent run has seen them launch up to 2nd, only 5 points behind the leaders. 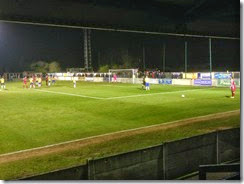 I’m still not sure how Staines won this game but it was entertaining to watch. A lovely club who gave me a more than friendly welcome are now only 4 points outside the play-offs after starting an eight game unbeaten run. Could they actually achieve it? Level 6 has given me some dreadful games and grounds in the past, but the quality really looks to have improved over the recent seasons. This was another one that wasn’t an exception. Booyakasha!

Photos from Staines Town vs Bromley

- Value for money: 8/10 (better concession value than a fair few grounds below)

- Atmosphere: 6/10 (Bromley boys back in numbers and in noise)

- Food: 3/10 (clear candidate for worst burger of the season sadly)

- Programme: 3/10 (a shell that contained an insert within an insert. At least it was right up to date)

- Referee: Andrew Laver – 5/10 (a yellow card might have calmed the game down slightly) 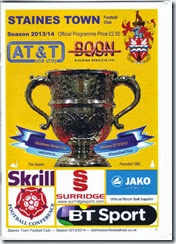 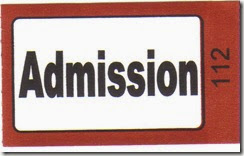