Fate has a weird way of working itself out. This game was meant to be played back in October when Bromley were riding high and looking like an unstoppable force in the Skrill South, it might have been a routine home win. Then however, down came the rain, in came the fixture congestion and Bromley had struggled while seeing Eastleigh rise above them in the league. This rearranged clash was now an all out title battle. Bromley having to win to keep it alive. Of course I was there. 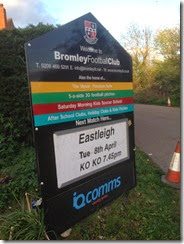 Bromley is a district of south east London that was historically a market town until 1965 when it became part of Greater London. Bromley is first recorded in a charter of 862 as Bromleag and means 'woodland clearing where broom grows'. At this time the King of Kent, granted land to form the Manor of Bromley. It was held by the Bishops of Rochester until 1845, when Coles Child, a wealthy local merchant and philanthropist, purchased Bromley Palace and became lord of the manor. The town was an important coaching stop on the way to Hastings from London, and is referred to in Jane Austen's Pride and Prejudice. It was a quiet rural village until the arrival of the railway in 1858 in Shortlands, which led to rapid growth, and outlying suburban districts were developed to accommodate those wishing to live so conveniently close to London. It still maintains the commuter feel today as the multiple routes from Bromley into London makes it an attractive place to live. 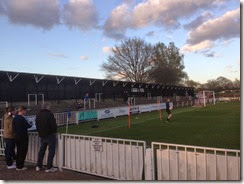 Bromley FC were founded in 1892 and played friendly games against mainly local opposition sides in its first season. Their first competitive football came in the South London League, which was won at the first attempt. However, they moved frequently between leagues in those early days with 2 seasons in the Southern League were followed by a spell in the London League, winning the Division Two title in 1897. They finally settled down in 1952 after rejoining the Isthmian League and became a yo-yo club for the next few decades with highlights of winning the League twice, tempered with 4 relegations over this period. In 1988, they finished 2nd, behind Yeovil Town (look where they are now!) but after a romping start in 1999, where Bromley took 13 points from their first 15, they then promptly only won 4 out of the next 37 and went down. 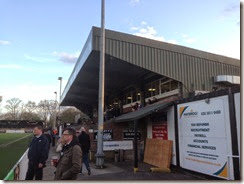 While continuing to plod along in the Isthmian 1st Division, the introduction of the Conference South in 2004, saw Bromley effectively drop another league down to Level 8 which was the lowest in their history. They sorted this out quickly however with a play-off win in 2005, followed by another one in 2007 to start 2007/08 in the Conference South. They’ve been there since, never really looking like challenging for a promotion spot, with an 11th place finish the best they have had so far, until this season. 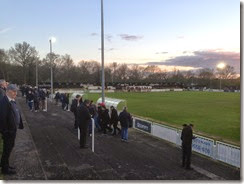 Bromley were doing so well at the start of the season, however their complete loss of form in March, including a late late defeat at Staines Town, has seen Eastleigh now jump above them in the table. Their form since that Staines defeat hadn’t improved with a draw at Eastbourne Borough as well as a 1-0 defeat to fellow play-off rivals Havant & Waterlooville. They were now coming into this game down in 3rd, only a point behind Sutton United. If the Ravens were not going to win the league, they may as well try and guarantee home advantage in the play-offs. 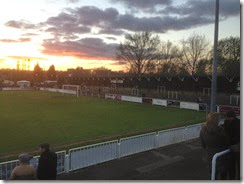 A really decent crowd had packed into Hayes Lane with over 1,000 watching this clash. The ground is one of my favourites this season with it being a mish-mash of stands and terracing. Down the far side is an uncovered, large terrace that offers a fantastic view of the whole place, while a good sized seated stand is opposite this, named The John Fiorini Stand, the former match secretary who sadly died in 2001. Behind both goals are covered stands, including one that is a true classic with wooden benches. It has been home to the club since 1938 and while it looks old, it has some modern touches that make this a fantastic ground. 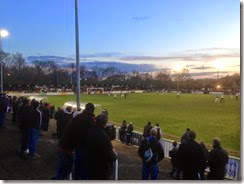 So Eastleigh had travelled down with a fair few, and going into this game well clear at the top, anything other than a home win would essentially ensure that Eastleigh would be playing Conference National football next season. The Spitfires do have their detractors however with many pointing to the major financial backing that the club get compared to others in the league. Bridle Insurance Limited took over the club in 2011 and part of a 5 year plan was to get Eastleigh into the Football League. Still on target, they have signed some players with major Football League experience such as Stuart Fleetwood, Ben Strevens and Ross Flitney. With this much financial power, it probably isn’t a surprise to see the club where they are. Are Eastleigh the next Rushden & Diamonds however? Only time will tell. 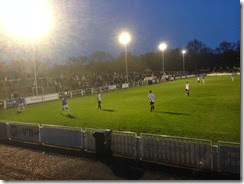 Bromley knew that just playing for a draw would have been no good to them and so straight from KO, went at Eastleigh. Bradley Goldberg fired a shot off the bar within the first minute as you felt Eastleigh would have to weather some sort of SE London Alamo. Credit to Eastleigh then, for not only keeping the pace of the game up, but having a good go back at Bromley. Some difficult crosses had Bromley’s goalie Joe Welch struggling but the home side could have snatched the opening goal when Brendan Kiernan fired a shot that Ross Flitney had to save well. A goal was coming though and when Ben Wright collected Craig McAllister’s flick on to loft the ball expertly over Welch, Eastleigh could start to party. Eastleigh now were also peppering Welch’s goal as the whole defence did not look comfortable to deal with the attack. Despite this, Bromley were level right on HT. A daft free kick was given away and a perfect set piece in from Joe Anderson saw captain Rob Swaine power a header home. Maybe some life in the title race yet! 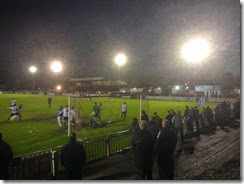 Eastleigh sensed for the 2nd half that they could finish this game off and tried to blow Bromley away by bombing forward early on. After some early decent chances, Eastleigh made the breakthrough on 58 minutes. A great run into the area from Daniel Wishart had Dean Pooley everywhere and as the home defender stuck out a lazy leg, Wishart was bundled over. Clear cut penalty. Ben Wright fired home the penalty and the title looked safe again. Bromley looked stunned but Welch kept the game alive as he brilliantly kept out Jai Reason’s glancing header. Bromley though began to put the pressure on Eastleigh to try and save themselves with the ball pinging around the box quite often. However, Flitney was rarely tested and so Eastleigh had done it. All but securing their title with that win. 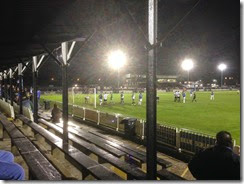 It was only a matter of time and promotion for Eastleigh was confirmed on Good Friday with a 2-1 win vs Basingstoke Town. Conference National football for them for the first time in their history and it will be interesting to see how they do. The past few seasons, the Conference South winners have done fairly well before sinking back towards the way the came. Can The Spitfires buck the trend? Bromley continued to plod along with very little form in the league, seeing Sutton United looking like securing the 2nd place spot. However, it came down to the final day of the season and going to Sutton’s final game, I would be on hand to see how it panned out. Get to Hayes Lane for football sometime soon though. It’s even better under the lights.

Photos from Bromley vs Eastleigh

- Atmosphere: 7/10 (packed in and both sets of fans made good noise)

- Programme: 4/10 (slick and glossy, but lacked any real articles) 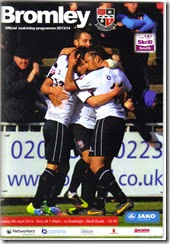 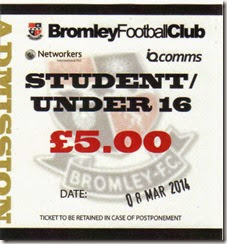