For reasons largely due to exams, it had been over 4 months since I had seen the Morecambe boys in one of their Southern tours. However, their trip to Bristol had been one I pencilled in from when the fixtures were released back last summer. With Rovers (emphasise the Bristolian accent) on the move soon from their hybrid football-rugby stadium, it was another good reason to go west and watch Morecambe pick up another (hopeful!) 3 points. 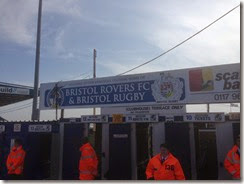 Despite living near it for long enough, I had never been to Bristol for football before, so. Bristol is a city in the south-west of England and is the UK’s 8th most populous city. Archaeological finds believed to be 60,000 years old, provide "evidence of human activity" in the Bristol area from the Palaeolithic era. Despite it being an area of only small Roman settlements, the town of Brycgstow ("the place at the bridge") appears to have been founded in c.1000 and by c.1020 was an important enough trading centre to possess its own mint. By the 12th century Bristol was an important port, handling much of England's trade with Ireland, including slaves and also became a centre of shipbuilding and manufacturing. By the 14th century Bristol was one of England's three largest medieval towns after London, along with York and Norwich. 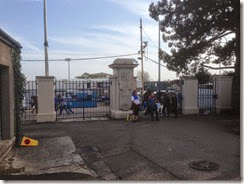 By the 16th century however, Bristol traders had concentrated in developing their trade to Spain and its American colonies as illicit goods became an essential component of the city's economy. This continued later on with the slave trade and saw the city’s economy downturn through wars with France and the abolition of the slave trade in the 1800s. However, Bristol (along with most of the SW) have Isambard Kingdom Brunel to thank for the building of the Great Western Railway to help the region grow. Today, the city is still growing and developing through new regeneration projects around the old docklands and harbour areas. 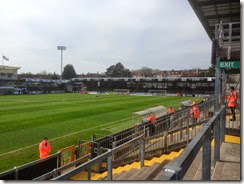 Despite modern football fans thinking City are Bristol’s main club due to their high level of playing, Rovers were founded in 1883, 11 years before City. Founded as Black Arabs FC, after a few changes they became the Rovers in 1889. Starting out in the Southern League, they remained there until 1920, picking up the league title in 1905. Then joining the Football League in 1920/21 into the new Division 3, they have remained a FL ever since. Rovers best finish was achieved in 1956 and 1959 when they finished 6th in the 2nd tier, which would today achieve a play-off place crack for the top flight. It has been a recent struggle for them however, despite a brief appearance in League 1 in 2007 to 2011, the money seems to have dried up and performances have not been good. Sat in mid-table, Rovers were in relegation trouble all throughout last season until John Ward came in and picked them to safety. It hasn’t been a good few years for the football of Bristol. 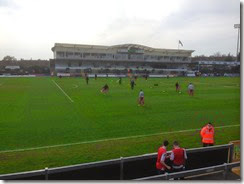 The Memorial Stadium is probably one of the reasons why the money has dried up for Rovers. It’s not a terrible ground, but it does feel like a rugby ground. Built by Bristol Rugby, Rovers played at their old Eastville until 1986 when they were forced to leave it for financial difficulties. After some hiatus in Bath for 10 years, they finally return to the Mem in 1996. Firstly as tenants, but as Bristol Rugby also suffered, Rovers stepped in. The main stand in the ground (pic above) is the West Stand which has the combined executive areas and seating. Opposite this is the smaller East Stand as well as terracing, including the small area in the corner for away fans. This is uncovered so I can imagine this would be a delightful away trip in winter! The big Blackthorn Terrace is a covered standing terrace for the home “ultras” (those proper farmers!) while the South Stand behind the other goal, is a temporary stand that has now been there some time. Much more suited to some tennis event to drink Pims on, rather than have a pasty and pint to watch League 2 action. 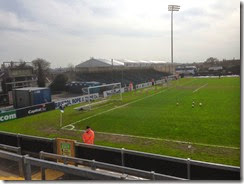 Rovers recently got the go-ahead from the planning authorities to sell the Memorial Stadium to Sainbury’s to part-fund a new ground near the University of West England campus. This is scheduled to open for the start of 2015/16 season, which means it will probably be hosting football probably no earlier than 2017. Amazingly, the ground is to hold 21,000 when first built, however considering Rovers average attendance is around the 5-6,000 mark, this will leave a lot of spare space. But good luck to them. Another visit west will have to come in the future then!

(The new UWE Stadium – looking like EVERY other new stadium design)

Despite John Ward propelling the side up the league last season, he has not been able to repeat the trick this time out. Only signing free players or loans, they got off to a bad start with only 1 point from the first 9. Having never been higher in the table than 11th all season, they were coming into this game down in 20th, only 3 points away from the relegation zone. It wasn’t much better for Morecambe either. Amazingly, since that win at Mansfield in November, the Shrimps have only won 4 out of the last 20 games which had seen them tumble down the table and were right in the shit too. You felt only 1 more win would be needed, maybe have a draw on top of that due to the number of teams down there, but games such as this one were matches we really had to win.

Rovers had made a brave call the day before the game with John Ward moving up to the Director of Football position and Darrell Clarke, the former Salisbury City boss, coming in. While he would have wanted an excellent start, the first 45 minutes of the game were frankly shocking with Rovers resorting to rugby tactics to smash Morecambe off the park. Morecambe though, still looked in control with Andy Fleming and Tony Diagne both firing wide. Rovers looked a hopeless team, but with no real punch for Morecambe upfront, this looked night and day that it would finish 0-0. In fact the entertainment was being provided by the subs warming up in front of the away fans as they were dancing and being more entertaining than the 22 on the actual pitch. 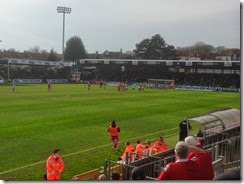 Rovers did improve for the 2nd half and actually gave it a real go. While Morecambe did eventually bring Kevin Ellison and Jack Redshaw on, the service up to them wasn’t forthcoming and so they were fairly ineffectual. With the current bottom two of Northampton and Torquay losing both of their game though, 3 points would be absolutely massive in terms of the relegation battle. Morecambe couldn’t create anything to test Mildenhall and we came into injury time. A sloppy ball in midfield allowed Alefe Santos to run at us down the right. Tony Diagne made absolutely no challenge to try and stop the ball coming in which allowed the floated cross to be perfectly met by West Country journey man Kaid Mohamed to head home. Heartbreaking. 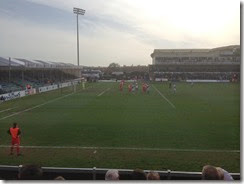 If this was one of those games were both teams lost, you probably wouldn’t be able to argue with that. An abysmal 90 minutes that barely deserved a goal but sadly it came. Morecambe since this game lost to Mansfield at home before putting a fine performance away at Fleetwood to come back with a 2-2 draw. The relegation battle however has tightened up with only 4 points separating 7 teams. With 4 games left against Scunthorpe, Hartlepool, AFC Wimbledon and Bury, Morecambe have it in their own hands to stay up, but will need to put in far better performances than they did for this game. It hasn’t got much better for Rovers either, with them now only 2 points off the relegation zone, it really is squeaky bum time.

Photos from Bristol Rovers vs Morecambe

- Value for money: 7/10 (normal concession prices are good to see)

- Atmosphere: 4/10 (both sets of fans entertained themselves) 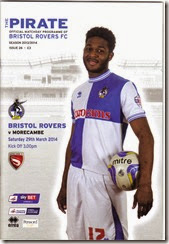