International friendlies are never ones to get the fans excited. Some of those “exciting” destinations that Scotland have been to in recent years include Koper, Cardiff, Molde and Larnaca. Racking up the points as a TA Member though means you need to do the less glamorous games to watch the sexy ones as Scotland go for Euro 2016 qualification. Therefore, Scotland’s first game of 2014, in Poland was always one I was going to attend. Szkocja w trasie! 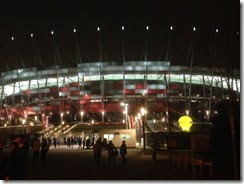 With the game taking place at the newly built National Stadium it was off to the Polish capital. Warsaw is the largest city in Poland, lying on the Vistula River and the 9th most populous city in the EU. Warsaw is an important economic hub in Eastern Europe and is known as the “phoenix city” because it has survived so many wars throughout its history, such as the major rebuilt after WW2 when 80% of its buildings had been destroyed after the Siege of Warsaw by the Nazis. 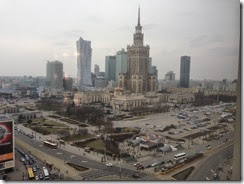 I’m normally not one to slate places completely, but I did find Warsaw a strange place. The painstaking rebuild has been completed to a brilliant quality, but even in the Old Town you can see that it’s not truly “old” compared to say, Zagreb. The layout is also strange with a square and Communist feel that sort of sadly detracts from the place. Me and the Missus left there thinking we hadn’t actually done that much in the two nights we stayed there, but then, that wasn’t that much to do. Krakow (our 2nd stop on the Poland tour) was far more lively and I am awaiting a quick return there to catch the Wisla Krakow vs Cracovia derby. 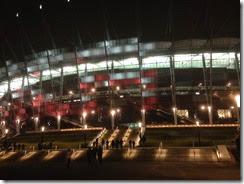 Poland’s national side have always been noticeable on the international stage since their first international back in 1921. (A 1-0 defeat to Hungary) Plodding through friendlies easily enough, they qualified for the 1938 World Cup and gave Brazil a fantastic game in the 1st Round, losing 6-5 A.E.T. After WW2, they did qualify for the 1958 World Cup, only to pull out. However, Polish football rocketed forward with the appointment of Kazimierz Górski in 1970. Winning Olympic Gold in 1972 at Munich before the brilliant 3rd place at the 1974 World Cup. After eliminating England in qualifying, they dispatched of Argentina, Haiti and Italy in the Group Stage before the 2nd Group Phase. After wins over Sweden and Yugoslavia, only West Germany needed to be beaten to pick up a likely World Cup win (calm down Holland), a late Gerd Müller goal sent W.Germany into the final and Poland had to settle for 3rd place after beating Brazil. 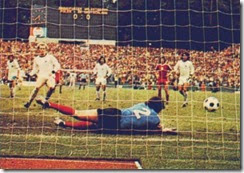 The 1978 World Cup saw Poland disappointingly crash out in Round 2 with a group containing Argentina, Brazil and Scotland’s destroyers Peru. 1982 however got Poland back into the 3rd best side in World football at the World Cup in Spain. After that tournament however, the great players such as Zbigniew Boniek and Grzegorz Lato retired and 1986 saw an earlier exit before complete tournament wilderness until 2002. Poor performances at Japan/Korea as well as at 2006 WC and 2008 Euros as well as their own home tournament in 2012 saw them enter into the 2014 World Cup qualifiers not in the best spirits. 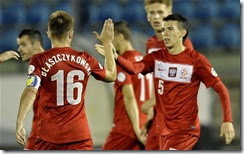 Despite a decent looking group containing England, Ukraine, Montenegro, Moldova and San Marino, the Poles slumped into 4th position, a massive 8 points behind 2nd place Ukraine. Their away form was what let them down with no wins apart from the guaranteed San Marino points and saw them drop far down the rankings. They have class in their side though with Bundesliga hotshots Robert Lewandowski and Jakub Błaszczykowski able to grab goals from any situation, but the rest of the squad do appear to be run of the mill players which was highlighted in the recent WC qualifiers. This friendly though had been spiced up by the recent Euro 2016 draw that tied Scotland and Poland to meet again, so this friendly took on more significance than when it had first been announced in December.

The National Stadium in Warsaw has only recently been restored to former glory after being reopened (and reconstructed) for the Euros in 2012 mentioned above. The old Stadion Dziesięciolecia on the site closed in 1983 as even then the stadium was dilapidated with no funds to fix it. Then the stadium became Jarmark Europa, the largest open air market in Europe with a major black market presence apparently as locals named the place the “Russian Market”. While the National Side played on, with major games at Silesian Stadium in Chorzów, the Euros coming into town, meant that along with the National Stadium in Kiev, Poland’s major showpiece needed upgrading too. 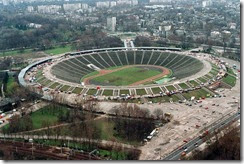 What replaced it, is possibly the best professional stadium I have ever been to. An imposing structure that you can see through the city and looks even better at night all lit up in white and red. Inside, a brilliant bowl that provides excellent views all around with concourses that just ooze space. It’s hard to describe as the ground is similar all around and some of the football purists may not like the slick look. But this is a brilliant venue, made even better for this game with the roof closed so both sets of fans could get their noise heard. 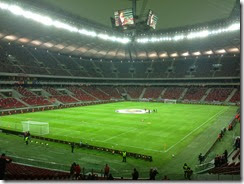 For the game, both sides were missing key players as Poland lacked the Bundesliga hotshots due to injury, while Scotland also were missing Robert Snodgrass and James McArthur who could have added another dimension to the squad. The game from the start was dirge, as international friendlies ALWAYS are this time of year. One of the extremely pleasing things to see though was the confidence Scotland had to knock it around the park, whilst not creating much, it kept the ball away from Poland and irritated the home fans. Poland missed their creativity as they looked distinctly average, although Ludovic Obraniak forced David Marshall into an excellent save to tip his long range effort over. Arkadiusz Milik also forced Marshall to react to a long range effort as this seemed to be the only route that they were going to score with. As it happened, Scotland nearly snatched an unlikely goal just before half time when Wojciech Szczesny had to cut out a cross from Alan Hutton with players lining up to score. It wasn’t great, but we weren’t behind at HT! 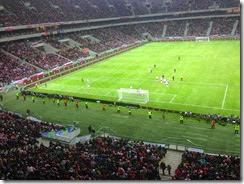 Scotland knocked the ball about again for the 2nd half as Darren Fletcher coming on added even more stability to the midfield. However, without something really creative, we did miss someone to push through the home defence. Poland couldn’t either however as long shots weren’t even getting on target now as Marshall had it easy. That should have changed on 58 minutes however when Kamil Glik had a free header from a free kick but powered it wide of the post. And despite 0-0 looking safe, Scotland grabbed a brilliant winner on 77 minutes. Ikechi Anya had whipped a ball in which was only cleared to the edge of the area where Scott Brown lashed a half volley into the top corner which Szczesny didn’t even move for. Poland, stunned, tried to rally, but created very little late on as Scotland’s excellent form continued to make it unbeaten in 5 games! 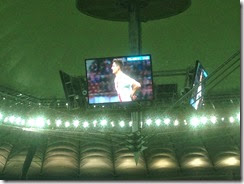 So another country visited with Scotland and another win! Whilst Poland will be very different for the qualifying match back in Warsaw in October, so will Scotland and I’m quietly confident we can take the 2nd qualifying spot to get to the Euros. Warsaw is a strange city, but has a fantastic National Stadium that I can only recommend visiting. I’ll have to be back, I missed the Pepsi Arena (the home of Legia Warsaw) and the purchase of their famous green shirt. It was an impressive performance from Scotland and as leaving the ground to get the bus back into the centre of Warsaw, I could hear the Tartan Army leaving with the sounds of “we’ll be coming! We’ll be coming down the road!” On this improvement of performance, we actually might. Get ready France.

Photos from Poland vs Scotland

- Match: 3/10 (international friendly, in March, this was never going to be good)

- Ground: 9/10 (a brilliant stadium, except for the lack of alcohol in the ground)

- Food: 7/10 (was decent grub and as throughout Poland, well priced)

- Programme: N/A – programmes were only available to press and VIPs and have currently gone for £50+ on eBay. I might get one, one day.