For all Shaymen, the 11th June 2008 is a dark day for the club as the old Halifax Town AFC were dissolved. That being said, the new club have come a long way in a short time with this being their first season back in National leagues. With my girlfriend being from Halifax and our friend working there, this was the obvious highlight to the Shaymen’s season that we needed to see. (I have wanted to make a “could Halifax play their Cards right?” but I won’t) 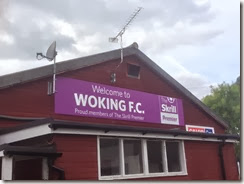 Woking is a large town and civil parish that shares its name with the surrounding local government district, located in the west of Surrey. Though Woking's earliest written appearance is in the Domesday Book, it is mentioned as the site of a monastery in an 8th-century context, as Wochingas. In the Domesday Book it appears as Wochinges, being held in 1086 by William the Conqueror. A building was first recorded on the site of Woking Palace in 1272 with Henry VII taking the manor from his mother and began the process of converting the manor house into a palace. His son Henry VIII continued this process when he succeeded his father in 1509, and the palace became a favourite residence of the king. However, Sir Edward Zouch who abandoned the palace and built himself a new manor house. Thereafter the buildings fell into decay and the original park surrounding the palace was turned over to agriculture. H. G. Wells wrote his book The War of the Worlds whilst living on Maybury Road in Woking in 1898. Many scenes from the story are set in Horsell and the surrounding area. Today, through the power of the railway, the town is part of the London commuter belt but features some top level businesses within the place and surrounding area such as the McLaren F1 team. 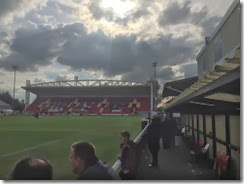 Woking FC were formed in 1889 and joined the West Surrey League in 1895, winning their first title that season by 1 point. However, within 21 years of being formed, the club was in danger of folding for financial reasons. The turning point came when, in January 1908, Woking played Bolton Wanderers in the First Round of the FA Cup. Despite losing the away game 5–0, the club made it into the national news. Bolton Wanderers, also impressed, travelled to Woking for a friendly match the following season, which kept the club solvent. In 1911 the Club joined the Isthmian League, maintaining their place in the top division for 72 years and finishing as runners-up to Wycombe Wanderers in 1956–57. The club then went into decline, culminating in a first-ever relegation in 1982–83. By the end of the 1984–85 season the club had plunged to Division Two South of the Isthmian League. They turned it round however and were back in the Premier Division of the Isthmian for 1989/90. 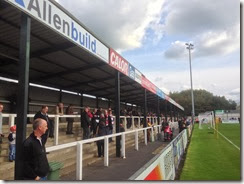 The club kept on the up though and Promotion to the Conference was achieved in 1991–92. This started the club’s most successful period under boss Clive Chapple with 3 FA Trophy wins in 4 years and 5 successive Top 5 finishes in the Conference. By the late 90’s however, Woking started to drop and were beginning to look over their shoulders in the league and the bank with financial difficulties. Long-time fan Chris Ingram bought the club which was then taken over by the Supporters Club in 2002 to remove those doubts, but relegation couldn’t be avoided as the Cards dropped to Conference South in 2009. It took them a couple of attempts to get back to the Conference National but Woking won the Blue Square South in 2011/2012 with ease, finishing 9 points clear of 2nd place Dartford. It was a decent first season for them back in the Conference National last season, finishing comfortably in 12th and only just missing out on “England’s best part-time club” which Dartford took by 4 points. 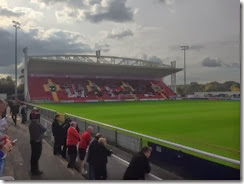 Kingsfield Stadium is a quirky venue, with the ground being dominated by the large Leslie Gosden Stand behind one of the goals. The rest of the place could not be more different with a medium sized covered terrace behind the other goal that provided some good views. Down one side of the pitch is the customary uncovered terrace that seems to be a common feature at grounds like this before the mashup of stands and terraces over the opposite side. Having been to a few Skrill League grounds, Kingsfield is a fine venue that competes well with the others I’ve been to and makes a good addition to the league. Even the clubhouse on site is spacious and had a good atmosphere with the large number of Halifaxians (do you call them that? Pie Eaters according to the Urban Dictionary is something completely different…) that had travelled down from Yorkshire. 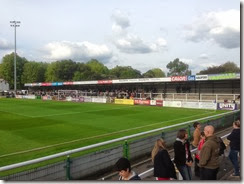 Hearts of hearts though, you wondered how many of them expected anything from this game. From the opening game of the season when they were away at Cambridge United on TV, and had 2 players sent off before losing 5-1, their away form has not been good. 5 away games since Cambridge and the best Halifax had was a 2-2 draw at Macclesfield Town. With 4 defeats, including a painful 4-3 reverse at Luton Town when they were 3-1 up. They were coming to a club however that had a dreadful home form, as Woking were suffering from 2nd season syndrome quite badly. With 6 home games before this, Woking had only won one of them and as a result found themselves in 21st position. They were on a wee run though, unbeaten in 3 so this was a tough game to call. 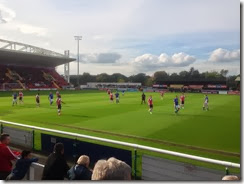 The game really wasn’t a thriller. In fact, it was one of those games to put you off football for a while. Normally, that’s ok when I suffer alone for 90 minutes but it’s a different matter altogether when your girlfriend has to suffer with it too. Woking being the home team, were dominant from the start with former Premiership player Kevin Betsy in particular looking dangerous. Defender Scott McManus just couldn’t deal with him and so cross after cross came into the box but nothing could be converted. The Shaymen did come back into the game with Simon Ainge missing a chance in the area midway through the first half. It was back to Woking bombarding the Town goal, but they still could not really test Halifax goalie Matt Glennon. 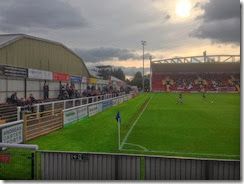 The second half was a more even affair, but still not one to be included in my top games of the season. In fact, the longer the game went on, the more obvious it was becoming that it would finish 0-0. The two main chances came right at the death as both sides should have opened the scoring. Woking were up first when Marc Roberts brought down Giuseppe Sole on the edge of the box and the free kick from Josh Payne curled onto the crossbar and away. Then Halifax had their golden chance when Lee Gregory took the ball around Woking goalie Sam Beasant but slipped before he could get the ball away and allowed Beasant to get back in time. No goals in the end, and it never really looked like we would get one either. 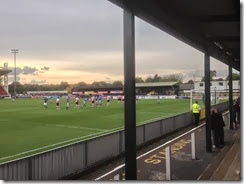 Considering the respective form of both sides, the final result wasn’t really much of a surprise then! Both sides have continued in the same way since this game with Halifax still not picking up an away win in the league, but their impressive form at The Shay means they are looking comfortable in 11th. Woking are up to 19th, but being only one point outside of the relegation zone means it’s likely to be squeaky bum time in 2014 for them. On the way back to Woking station I asked my girlfriend what she thought of the game, “it was ok” was the response but with a look of disappointment on her face like a father who had just been told their son was a Hibs fan. Sometimes you go to games with people who then get why you love doing this so much because they see a thriller. This game wasn’t it. 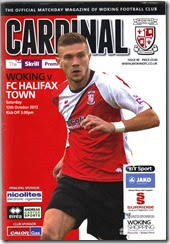 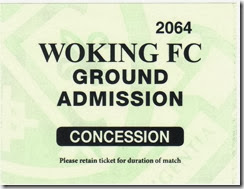