Normally my away trips following Morecambe are all down in the South. Rarely getting anywhere near the glorious North and all it has to offer. Maybe it was exam stress or some other mental capability that I lacked for a brief moment, but when I saw the first free weekend I had after the exams Morecambe were at “nearby” Mansfield it seemed like a brilliant idea. Only the 141 mile trip then! 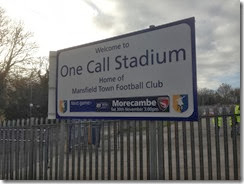 Mansfield is a town in Nottinghamshire, surrounded by a pocket of steep hills within the Maun Valley, the town is around 12 miles north of Nottingham. Settlement in the Mansfield area is known to date back to Roman times, with a villa discovered in 1787 between Mansfield Woodhouse and Pleasley and a cache of denarii coins found near King's Mill in 1849. After the end of Roman occupation, the early English royalty are said to have stayed there, with the Mercian Kings having used it as a base for hunting in the nearby Sherwood Forest. The Domesday book compiled in 1086 has the settlement recorded as Mammesfeld. By the time of King Richard II signing a Warrant in November 1377 granting the right for the tenants to hold a fair every year for four days, the spelling had changed again to Mannesfeld. Access to the town between the 16th and 17th centuries was via several inns and stable yards with many known to date from medieval times. Several timber-framed cruck buildings were demolished in 1929 and another in 1973 which was documented by a local historical society during its demolition and was dated at c.1400AD, or earlier. Other glorious Tudor houses on Stockwell Gate, Bridge Street and Lime Tree place were also sadly demolished to make way for new developments before they could be viewed for being listed properties. The majority of buildings remaining are from the 17th century onwards. 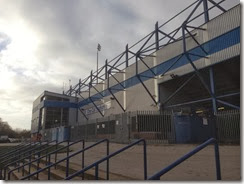 Despite football being played in the town before their birth, Mansfield Town were founded in in 1897 under the name of Mansfield Wesleyans. The club played friendlies up until the 1902/03 season, when it joined the Mansfield and District Amateur League. When the league dropped its Amateur tag in 1906, the church abandoned the club, which changed its name to Mansfield Wesley and moved into the Notts and District League. In 1910, the club changed its name to Mansfield Town (despite Mansfield Mechanics being the bigger and better of the clubs) before spending the next few years trying to gain promotion to the Football League. They finally achieved this in 1931 when they were elected to the Southern Section of the Third Division. They spent most of their time floating around the basement with very few forays into the 3rd tier once they had been relegated to the new Fourth Division in 1959/60. Despite some good FA Cup performances over this time, their 77 year spell in the Football League ended in 2007/08 when a 1-0 defeat at home to Rotherham sent them down. 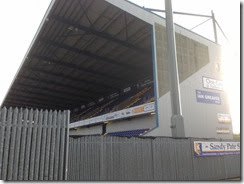 Time in the Conference is always hard for teams and Mansfield took to their surroundings no differently with some early seasons of treading water. An FA Trophy Final appearance in 2010/11 when they lost to Darlington on penalties seems to have kicked the club to push on however with a 3rd place finish in 2011/12 before pulling off some brilliant 2nd half of the season form in 2012/13 to pip Kidderminster to the title by 2 points. Paul Cox seemed he could do no wrong this season either and when Mansfield beat their near neighbours Chesterfield 1-0 on September 28th, they were riding high near the top of the league. Since then, it hasn’t gone well. No wins in 9 in the league and 5 straight defeats since picking up a 0-0 draw against Bury in October. With the Stags tumbling down the table, Cox needed a win and fast before they were back in the Skrill League. 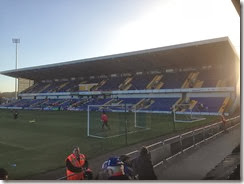 Field Mill (or the One Call Stadium if you like sponsorship) is a ground that is too good to be hosting Level 5 football you feel if they were to drop. A ground that underwent major renovation at the end of the 90s, it is dominated by the two tiered Ian Greaves Stand that opened in 2001. The home fans also have the smaller Quarry Lane End behind one of the goals which is the bog standard singled tiered stand that features around many of the Football League venues. Opposite this is the North Stand, that while was traditionally a home supporter area, they have been moved to allow away fans in. A stand with decent views and being fairly close to the pitch is a plus, although the lack of proper concourse to eat your pies and drink your beer is a bit of a down, especially as the entrance of this stand backs onto the retail park next to Field Mill. The Bishop Street Stand which runs down the other side of Field Mill is currently unused due to safety reasons and blocked out with advertising. With the ground being noticeable (and walkable) from the train station, its worth a visit! 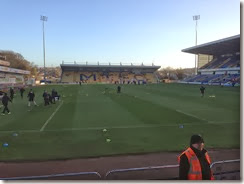 The problem with going on such a good unbeaten run is that when it ends, it can take a team a bit of time to get back into the groove. Since that 9 unbeaten in the league run was ended by Cheltenham, Morecambe have been slightly ropey as they try to stay in the play-off hunt. Defeats to Accrington, Rochdale and Oxford as well as Southend dumping us out the Cup have been partially offset by decent results against Burton and York. Still, this was an important game for both sides as neither were in any great form and all it needs is one win for you to rocket back up the table on a run. (Or so the cliché goes…) 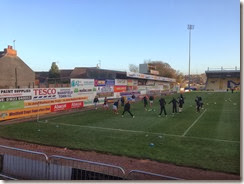 One noticeable feature that I had seen and read about too to Morecambe’s performances this season, is a lot of the time, their 1st half performance is wank. That happened here too as Mansfield started off well with Ollie Palmer dragging a shot wide after 11 minutes. Falling asleep isn’t what the Shrimps needed and on 17 minutes it happened and it was 1-0. Despite being described by the Mansfield match report as “a moment of magic” (man, what shite must you normally watch here!?), a long punt upfield from Chris Clements caught Chris McCready out which allowed Ross Dyer to run in behind and fire under Barry Roche. Surely we wouldn’t be the team that Mansfield broke their duck against!? Morecambe improved, with Kevin Ellison looking as lively as ever but Mansfield were a threat, especially on the counter-attack. Towards the end of the half, winger Colin Daniel threw himself to the floor like a twat in the box, but referee Lee Collins wasn’t interested. (Remember that…) It had to improve in the 2nd half, it had to. 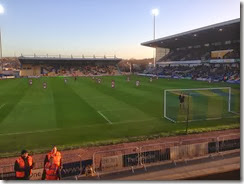 Big Jim sent on Andy Fleming and the returning Jack Redshaw from injury and Morecambe looked a completely different side. Mansfield couldn’t cope and the equaliser came within 6 minutes. Martin Riley tried to clear the ball only for it to hit Stewart Drummond and allow the Morecambe midfielder to collect the ball in the corner of the area. For a brief second, Drummond turned into Johan Cruyff as his swivel and cutback perfectly found Redshaw to smash home from 5 yards. Mansfield were rocked and had Padraig Amond shown a bit more control when he fired a shot wide just moments later, it could have been the complete turnaround. Mansfield recovered though and for the final half of the 2nd half, the game was really in the balance. 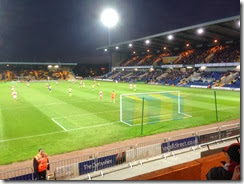 Roche made a great save from Palmer while Drummond managed to miss from 8 yards as it was anyone’s. Then when Morecambe were done on the counter after 74 minutes, the 102 away fans feared the worst. Daniel sped off into the penalty area and Roche sped out, we all knew what was coming. Was it a penalty? Tough one, I’m thinking no, considering how convinced Roche was and how Daniel had previous for diving in the box (home fans weren’t sure either!) while Mansfield were angered that Roche wasn’t sent off, “despite the fact he was the last man.” (Considering how poor the Mansfield match report is, I’d take it with a pinch of salt) It didn’t matter anyway as Sam Clucas’ penalty was dreadful and Roche pushed it wide. I think at this point Mansfield knew it wouldn’t be their day and with 5 minutes remaining, a Redshaw cross caused havoc, Ellison arrived to loop a header over Alan Marriott and give Morecambe an unlikely victory. It still needed some brilliance from the defence and Roche in injury time as Ellison picked up a dislocated jaw from that header, but we held on for a brilliant 3 points. 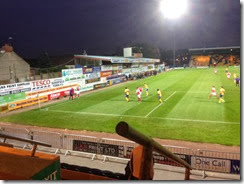 Mansfield need a positive result and soon, especially for Paul Cox as a dire 0-0 draw at Wimbledon before conceding 2 in injury time in a 3-2 home defeat to Accrington means, the Stags could be facing a quick return to non-league. It was a friendly enough place with a relaxed atmosphere so would recommend a visit. Especially while they are on this form! Morecambe continue to amaze and frustrate with defeats to Cheltenham (again!) and Scunthorpe coming either side of a win vs Bristol Rovers. With the remaining away games for the Shrimps this season (+ the hope of getting to the Globe in 2014) it is probably Bristol Rovers that will be the next new ground that I see the Shrimps at. And who knows, a play-off place could be really up for grabs then!

Photos from Mansfield Town vs Morecambe

- Value for money: 7/10 (reasonable price for this league) 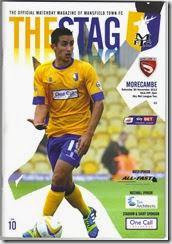 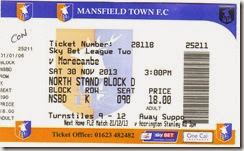