Having not tied myself to a particular cup run through the FA Vase this season, it allowed me to pick out any interesting games that might come along. For the 1st Round, an East London derby stood out as Clapton hosted Barking. With the Old Spotted Dog being the oldest football ground in the capital and one that I had wanted to see for a while, it was quite obvious where I was heading for FA Vase 1st Round Day. Add the fact about the new ‘Clapton Ultras’ that had made quite an impression upon people from the start of the season, this had the makings to be an excellent cup tie. 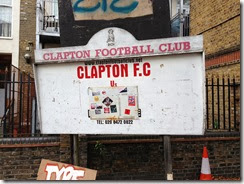 Clapton FC is based at Forest Gate which is a residential area in the London Borough of Newham, 7 miles northeast of Charing Cross. Its name is derived from a southern gate of Epping Forest which once stretched continuously down from Epping to the main Roman Road linking Camulodunum to Londinium. Fragments of the forest remain throughout north east London such as the heathland of Wanstead Flats. The Forest Gate led into Epping Forest and was erected to prevent cattle straying from the Forest into the High Road. The area remained rural until the 19th century. From the 18th century a number of wealthy city dwellers had large country houses in the area and many of them were Quakers, the best known of these were the families of Gurney, Fry and Lester. Forest Gate formed part of the County Borough of West Ham since its creation in 1886. The county borough was abolished to form part of the present-day London Borough of Newham in 1965. 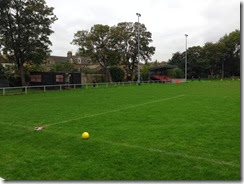 Clapton FC has a wide and varied history since their formation in 1878 as Downs FC, based in Hackney. After a name change a year later, Clapton moved to the Old Spotted Dog ground in 1888 after it had been vacated by St Bartholomew's Hospital. They were also the first club in the UK to play in continental Europe in 1890 when they hammered a Belgian XI 7-0. (Obviously well before Lukaku, Fellaini et al) After becoming founding members of the Southern League in 1894, they struggled in Division 1 and left a season later when clubs started to become professional. Clapton’s reputation as an amateur club was there to see when they reached the FA Amateur Cup Final in 1905 before winning the competition a year later. Now members of the Isthmian League, the trophies started to flood in for the Tons with Isthmian League winners twice and another four Amateur Cups to add to the other County FA cups they had also won. 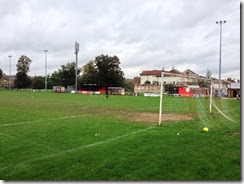 If you wonder why you have probably never heard of Clapton then, it’s because a slow decline kicked in from the mid 70s and the club has never got anywhere near to its previous glory days. Floating around in Division 2 and 3 of the Isthmian League, the club dropped out of that league in 2006 when they finished bottom of Division 2 for the 2nd successive time. Now members of the Essex Senior League, the club had struggled for some time with a lack of volunteers, fans and reasonable players. Finishing in the bottom 2 of the ESL for the last 7 out of 8 seasons, the club even looked like dying at one point and losing the Old Spotted Dog ground. Now a small recovery has kicked in with some new volunteers, a decent looking squad and the intriguing nature of the Clapton Ultras. 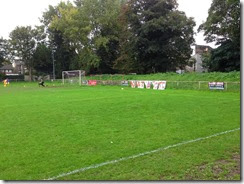 The Clapton Ultras (or Scaffold Brigada) were an interesting bunch for me and one of the main reasons why I selected this game. Wondering if they were a parody at first, it seems the Ultras are here to stay and provide an excellent atmosphere home and away at Clapton’s various games. With their number around 20-30 (at least for this game) they are also providing Clapton with some good admission money and cheering their lads on to some impressive results this season. With the team expected to struggle around the bottom again, the new atmosphere around the club has seen them rocket up the table and were coming into this Vase tie in 7th place, a massive 17 points off bottom club London Bari (who currently groundshare at the Old Spotted Dog). Clapton had even pulled off the impossible this season as a win at Stanway Rovers in the FA Cup meant they had won a tie in the competition for the first time since 2005/06 when Stotfold were the unlucky side. 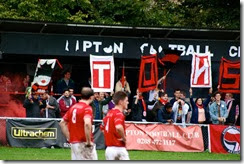 (Clapton Ultras display during this game – taken from their Tumblr)

The Old Spotted Dog was a ground that I had also been looking forward to seeing but sadly, it does show its age now. From the entrance of the ground where the Old Spotted Dog pub (which has been closed since 2004) is boarded up to the overgrowing weeds around the place, it does need a bit of TLC. In terms of facilities, there is a fairly small sized clubhouse when you first enter the ground and a smallish stand right on the halfway line down one of the sides. Opposite this is the scaffold standing ‘terrace’ which is the Ultras territory and has been brilliantly plastered in Clapton Ultra stickers and other AMF signage. The rest of the ground is pretty basic, although there is a small terrace behind one of the goals if you can fight past the weeds and large plants to get there. Considering the pictures I had seen of the place when the large stands and terraces were up, it’s a shame what the Old Spotted Dog has now become. It is 125 years old this year however (much like another London classic) but it has seen better days. 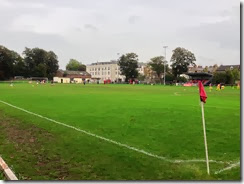 In town for this East Laaaaaaandon clash were the Barking boys from just up the road. Having not seen them since I crossed the 100 grounds mark, I was interested to see how they had progressed, considering they played extremely well the time I saw them. A close game was likely considering Barking were in 6th place, 1 point above Clapton with a similar record in the league. Barking had entered the Vase in the previous round with a decent 5-1 away win at Northampton Spencer in the 2nd Qualifying Round which is the same round; Clapton had also started with a 1-0 win over Wotton Blue Cross. With similar records, and this being a derby, the game looked like it would be too close to call. 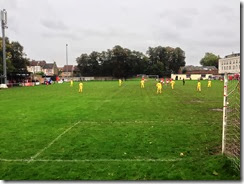 Backed on by the great atmosphere created by the Ultras, Clapton did start the game off fairly well with some decent early runs. A noticeable number of Barking fans were also here and getting behind their side well before the poor rainy and windy weather started to drag the game down into a slog. Barking kept their heads though and began to batter the home side and create chance after chance. First up to miss was Dumebi GB-Dumaka who didn’t realise the time he had for his chance and fired it wide. Barking passed up more chances through Ben O’Brien and Jay Abberley before a wonderful passing move down the left saw Ricky Mackin unbelievably fire wide from about 6 yards out. You had to wonder if Barking would regret the amount of missed chances they had wasted but on 42 minutes they made the breakthrough with a simple move. With Clapton pushing up, James Barlow launched a long diagonal across where Lamar Reynolds collected it and ran off and towards goal. With Pepe Diagne not coming off his line, Reynolds fired past him with ease and silenced the Ultras for all of 5 seconds. Interesting 2nd half to come then! 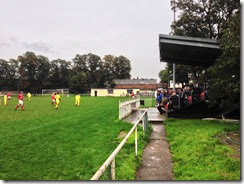 Clapton still had no answer to the Barking onslaught for the start of the 2nd half as chances were still being fired at Diagne’s goal. The home side nearly did hit the ultimate sucker punch on 55 minutes when Raphael Duyille forced Barking debutant Damos Horvath into an excellent save. This seemed to spur Clapton and their fans on as Horvath was being called into action a lot more having been a spectator for the first 45 minutes. A team always gets one glorious chance to equalise during the game and Clapton’s came midway through the half from a Barking free kick. Trying to take it too quickly, Barking only found a yellow shirt as the ball cannoned off a teammate which set up Clapton’s Tom Jeffes but the striker fired the ball over the bar as another chance went begging. With this being a derby, it had hotted up on the pitch, despite the poor weather and when Barking’s Ade Oshilaja reacted badly to a challenge, it did kick off. After some cards were shown, Oshilaja must have been desperate to be off the pitch as he flew into a ridiculous challenge and was promptly sent off for a 2nd yellow. Barking played out the final 18 minutes with ease and could have scored more as they qualified for the next round of the Vase. 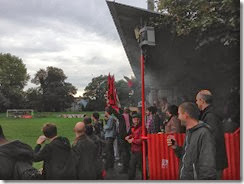 Barking were the better team on the day, but I did feel if they were drawn against anyone half decent they would be found out. In Round 2, Barking were away at SSML side Ampthill Town who promptly beat them 7-0. Enough said. The Clapton Ultras were in good voice for this game and are a great addition to the non-league football scene in London and the South-East. It did feel like this was the hipster club with people bringing flags, great chants and a great atmosphere to the game. I will make the effort to try and get to a Clapton away game in the season to see the Ultras out on the road. As for the Old Spotted Dog, as much as the history of the place rivals any ground, it’s just a shame to see what it has become now. Maybe, just maybe, one day the Dog will be back to its best.

Photos from Clapton vs Barking

- Value for money: 6/10 (normal price for Vase ties in the Capital) 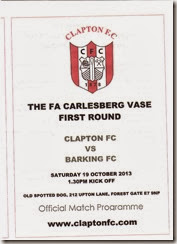