A few months prior to this game I had made my way after work (currently helps I work on the East side of the capital) to Dartford hoping to see them claim another top team scalp in Wrexham. However, the rain yet again screwed me over and the game was played the next day. (With me elsewhere) Princes Park looks a ground that was worth making an effort for so yet again, after work, I travelled midweek to Kent. 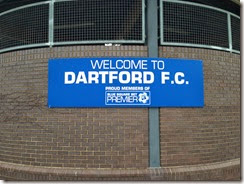 Dartford is the principal town in the borough of Dartford and is situated in the northwest corner of Kent, 16 miles east south-east of central London. In prehistory, the first people appeared in the Dartford area around 250,000 years ago: a tribe of prehistoric hunter-gatherers. Many other archaeological investigations have revealed a good picture of occupation of the district with important finds from the Stone Age, the Bronze Age and the Iron Age. When the Romans built Watling Street (Dover to London road) it was necessary to cross the River Darent by ford, giving the settlement its name and villa were built along the Darent valley. During the medieval period Dartford was an important waypoint for pilgrims and travellers en route to Canterbury and the Continent and various religious orders established themselves in the area. At this time the town became a small but important market town. The sixteenth century saw significant changes to the hitherto agricultural basis of the market in Dartford, as new industries began to take shape. The earliest industries were those connected with agriculture, such as the brewing of traditional beers and ales. Sir John Spilman set up the first paper mill in England at Dartford in 1588 while Dartford later spilled into machinery and heavy machinery. From those beginnings in the 18th century was to come the industrial base on which the growth and prosperity of Dartford were founded. Today, the town appears to be on the decline with local press stating the the town centre has no future and a large majority of its residents commuting into London. 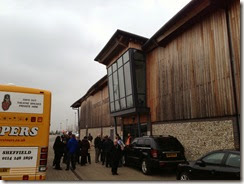 Dartford FC was formed in 1888 by members of the Dartford Working Men's Club, initially playing only friendlies. The club soon was entering cup competitions, reaching the final of the Kent Senior Cup in 1894. Following this, Dartford were founder members of the Kent League for the 1894–95 season, and entered the FA Cup for the first time the season after. Two seasons later, Dartford became founder members of the Southern League Division Two, winning the Championship at the first attempt. Around the same time the club found its first permanent home ground, Summers Meadow. In addition to the Kent and Southern Leagues, Dartford gained a reputation nationally by becoming the first club outside the Football League to reach the FA Cup 3rd Round in successive seasons. In 1935/36 Dartford lost to a star studded Derby County 3–2 at the Baseball Ground before the next season saw them lose 0–1 at home to Darlington. During the 70s they won 4 successive Kent Senior Cups as well as the Southern League which saw them apply for Football League status in 1974. The closest they have ever been. Trophies still continued to be won and after a dreadful first season in the Alliance Premier League in 1981/82 (finishing 2nd bottom) they came back for another spell between 1984 and 1986. 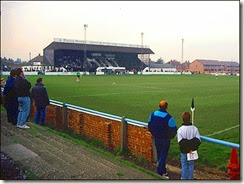 Dartford in the late 80s and early 90s suffered like many other clubs after the Bradford City fire and were under pressure to modernise their ground. While Maidstone Utd offered some income during their time ground sharing at Watling St, when they went bust after a step too far into the Football League, this left the Darts in too much debt and they themselves had to pull out of the League and leave their old ground. After recovering in the Kent League, and doing a tour of shit Kent towns (Erith, Thurrock and Gravesend) the Darts moved back to the town into their new Princes Park in 2006. The ground is a very different new build as it is described as the “most ecologically sound ever built.” As well as having a grass roof on the outside and solar panels to generate its own electricity – Princes Park is a brilliant venue that features a bowl of standing terraces and seating. It reminds me of a small European venue and seeing an evening game here made the atmosphere even better. A special note to the giant wooden man who Dartford have also stuck on the terrace – probably the only wooden man (cue jokes) to be on a terrace in this country but it does add to the unique feel of the ground. 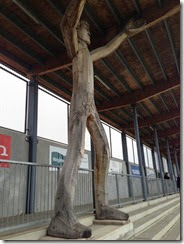 After rising out of the Kent and Southern Leagues, the Darts won promotion to the Blue Square Premier last season with a playoff win over Welling United. Despite being one of the few part-time teams in the league, they were having an excellent season and came into this game in 9th position. They looked to have an outside chance of a playoff place until recent poor form had most likely put them out of contention this season. Their opponents for this clash were ex Football League side Grimsby Town. The Mariners had been relegated in 2009/10 and spent the next two seasons being consistently inconsistent and finishing 11th both times. This season, they had upped their consistency and were in a prime play-off position in 5th. With an 8 point gap over 6th place Forest Green Rovers with only 4 games to go including this one. A win for Grimsby in this game, combined with Hereford winning at Forest Green would confirm the Mariners play off place. However Dartford had already beaten Mansfield (2nd at this time), Kidderminster (1st), Wrexham (3rd), Newport (4th) and a double over massive massive club Luton Town. Clearly a good team at home, Grimsby were going to have a tough game. 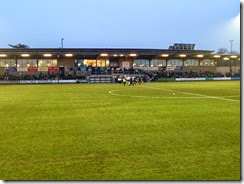 Grimsby had already looked slightly off the pace at the start of the match but when defender Ian Miller received a cut to the head and had to be subbed, Dartford easily took control. Charlie Sheringham first had a shot blocked on the edge of the area by Tom Naylor before he let fly with another shot that James McKeown had to save well from. Grimsby had rarely got out of their own half before they went 0-1 down on 26 minutes. Nathan Collier had a shot that was blocked and pinballed around before it fell to Jack Evans and his shot went in via a deflection. The home side should have made it 2-0 a little while later when Sheringham somehow saw his shot saved by McKeown – the start of a masterclass in goalkeeping from both sides. Grimsby did have a late corner at the end of the half but Joe Colbeck sent it out for a goal kick. They were deservedly down at HT. 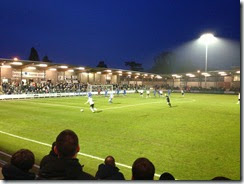 Dartford started where they left off with Sheringham firing another long range effort that McKeown again was alert to. Then Grimsby started to test home goalie Csaba Somogyi as Andy Cook fired a low shot that he saved well before saving the follow up. Next it was McKeown’s turn to produce a good save as he again kept out a Sheringham shot as Dartford went for it. The 2nd half was back and forth and Grimsby should have equalised when Lenell John-Lewis was all alone on the Darts box but planted his header at Somogyi. The big Hungarian on loan from Fulham then came into his own as he brilliantly kept out a Cook header but Dartford were riding their luck. Grimsby did grab an equaliser when a daft free kick was given away and from Frankie Artus’ delivery, Cook was unmarked and planted his header into the bottom corner. Grimsby nearly threw it all away however as Dartford launched an attack instantly, only to see McKeown make another top save, before Elliot Bradbrook somehow headed over from a corner. The last 5 minutes were fairly breathless as both sides went for it, but Grimsby snatched the winner with just 2 minutes to go. Dartford again went missing at a set piece and Aswad Thomas crashed his header home to give the away side the 3 points. There was still time for Colbeck to be sent off for a stupid off the ball incident, but Grimsby became the only top 5 side in the league to win at Princes Park this season. 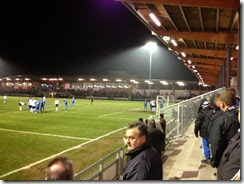 This result, combined with Hereford’s 1-0 win at the New Lawn meant that Grimsby had secured their play-off place. However, they crashed in the semi-finals to Newport County 2-0 on agg, who in the end went up to the Football League. The 4th place finish they achieved this season however is a massive improvement and with Barnet and Aldershot expected to make no impact in the Blue Square Premier next season, the playoffs should be another realistic target for Grimsby. Despite this minor setback, Dartford achieved their goal of finishing as the country’s best part-time side with an 8th place finish. A fantastic achievement for them, especially as they were so highly tipped for a relegation battle. Princes Park is a fantastic venue and one that I will be visiting again in the future. Good luck to both teams for 2013/14.

Photos from Dartford vs Grimsby Town 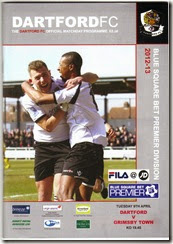 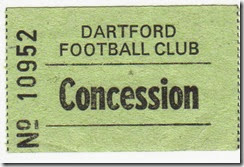