The company who I currently work for (they’ll remain nameless) do offer a few good perks (again they shall remain nameless). However, very few of those perks involve football. Yet when an offer to go watch Championship bound QPR came up at a reasonable price – this was one offer that I was always going to snatch up. While their opponents for the game on offer were unglamorous Wigan, as the relegation crunch set in it became clear that this would be an important game for both sides. Even better then! 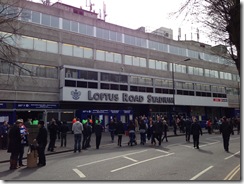 QPR (unsurprisingly) settled to begin with in the Queen’s Park area of London which is an area of northwest London, located on the boundary between the London Borough of Brent and the City of Westminster. The neighbourhood lies between Kilburn, and Kensal Green and was developed from 1875 and named to honour Queen Victoria. In 1879 the Royal Agricultural Society chose Willesden as the site of its annual show. A 100-acre site was designed and in June the show was opened. Queen Victoria even attended as the show ran for a week, but made a loss of £15,000. A public campaign was launched to try to secure the whole 100-acre site as a park to ensure some green space was retained in a fast-developing part of London. In the end only the central part of the site was purchased. The park opened in 1886 and was named Queen's Park in honour of the reigning monarch, who was celebrating her Golden Jubilee the following year. Today, Queen’s Park still has the green area for people to enjoy as well as being a residential area that is fairly well served by transport links. It does have an underside though as Wikipedia states, “The younger generation of street youths from Queen Park's Mozart Estate are "beefing" with the younger generation of street youths from the South Kilburn Estate.” 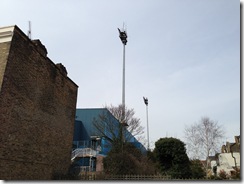 QPR was founded in 1886 when a team known as St Jude's (founded 1884) merged with Christchurch Rangers (founded 1882). The resulting team was called Queens Park Rangers, because most of the players came from the Queens Park area of North-West London. QPR began by floating around various grounds in their early days with spells at Welford’s Fields, Home Farm and Park Royal Ground amongst other places before settling at Loftus Road in 1917. They did become professional in 1889 and floated around the lower leagues before they won their first title as winners of Division 3 South in 1948. Their greatest period in history though was during the 60s with Alec Stock as manager and Jim Gregory as Chairman. They won the 3rd Division championship in 1967 as well as the League Cup (the first 3rd Division club to do so) with a 3-2 win over WBA. 1975/76 saw Rangers finish runners up in the top flight behind Liverpool – the highest league position they have ever finished. They have since fluctuated between the top 3 divisions and still never have looked like recreating their 2nd place finish in 1976. More recently financial problems have hit the club with administration in 2005 before F1 chaps Flavio Briatore and Bernie Ecclestone invested in them in 2007 before another F1 guru Tony Fernandes bought out the two of them in 2011. He was extremely lucky to see a dreadfully poor side stay up last season on the last day and had invested heavily this season in both summer and in January on the side. 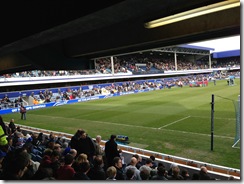 The club are looking to leave Loftus Road in the future, which is understandable as the ground does look a little on the tatty side. That being said, considering the Premier League is awash with soulless corporate bowls, this is nice little ground that stands out from them. When you arrive at the ground (when walking from White City tube station) you can tell this is a different sort of top flight ground with the houses hemmed in around it and the small staircases that lead up to the higher tiers. The group I was with were housed in the lower tier of the School End Stand which is a tight and narrow seating area that does afford some ok views of the action from the back row. The rest of the ground is similar with only the Ellerslie Road Stand not being two tiered. The small band of Wigan fans were situated above us and made not much noise (not sure on the exact number) throughout the match but I could quite happily come back here. One word of warning, don’t even bother trying to get food at HT – the queues I had in the small concourse meant that I would probably have missed most of the 2nd half if I wanted my chicken balti pie so I missed out, shame. 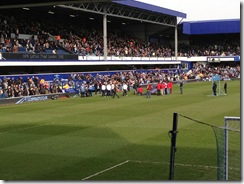 With Loftus Road being far too prohibitive to fully expand, the nearby BBC Centre was mentioned, however large parts of this development are listed, meaning the Hoops won’t be coming here. Where they do end up is a mystery, however it was clear even before this game they wouldn’t be a Premiership side for 2013/14. Coming into this game they were 19th and a massive 7 points off the drop. The game was seen as an unofficial last chance saloon for them to try and salvage a Premiership place. With some upcoming games against tough opponents and Newcastle (I’m joking Geordies!) they had to pick up 3 points in this game to try and get some momentum going. Their opponents were also in the relegation mess, but lets be honest, this game was in April and so Wigan Athletic usually are. They had already started their annual escape from the drop routine with 3 wins in a row leading up to this game against Everton, Newcastle and Norwich and a FA Cup Semi-Final place booked after this match. That being said, they were still properly in the shit (mainly because they are so bad in the first 4 months of the season) and also massively needed the 3 points. Entertaining game in prospect then! 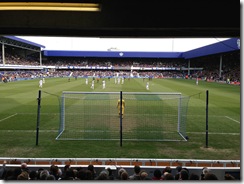 Two contrasting styles were instantly noticeable as QPR preferred to hit Wigan on the counter attack while the away side decided to become Barcelona-lite and try a tiki-taka approach. Quite quickly it was seen that QPR, led well by Samba at the back, easily had this under control and started to threaten Joel Robles goal. They did almost have an early goal on 9 minutes when Loic Remy had a shot that bounced onto the post with Robles beaten. Wigan did occasionally break through however as Callum McManaman whipped a ball in that caused difficulty for the QPR defence. Then came a moment that looked to have turned the match. Bobby Zamora and Jordi Gomez both went for a ball, Gomez with his head, Zamora with his feet. Zamora caught Gomez badly in the head (accidentally, but badly all the same) and referee Phil Dowd sent him off. The home fans went ballistic as QPR looked right up against it now, although they did still look the most threatening. In fact as HT came, you couldn’t really tell which side were a man down as Wigan looked out of ideas and the home side looked comfortable. 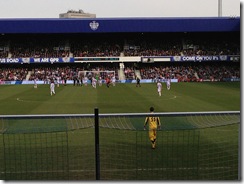 That continued for the 2nd half too, with QPR happy to watch and soak up the ridiculously slow Wigan play and hit them on the counter. It wasn’t a great half of football however, as despite looking dangerous at the start of the break, the home side never troubled Robles in goal as their lack of quality showed. The majority of the half was poor however as a paragraph is heavy going to string this out. The action happened at the end of the half, as Wigan began to push forward to nick a rare away win. Firstly, James McArthur forced Julio Cesar into a brilliant save from a close range header before Wigan were awarded a freekick on 82 minutes. When the freekick was poor and quickly cleared, Stephane Mbia stormed forward and played a pass to Remy who shot first time with the inside of his foot and straight into the bottom corner. Loftus Road woke up and erupted as we had amazingly seen a goal. You did just wonder if QPR could hang on and that was answered in injury time when Mbia gave away a daft freekick. Up stepped Shaun Maloney who curled it brilliant past Cesar and into the top corner. Oh dear QPR. 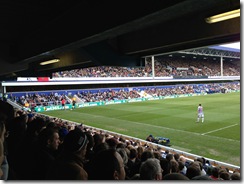 With the shell-shocked fans leaving the ground afterwards resigning themselves to playing mighty Bournemouth and Doncaster next season, this was confirmed 3 games later when a dire 0-0 draw against Reading relegated them both. You do feel QPR are at a crossroads currently. Fernandes will surely not continue to pump silly amounts of money in and the majority of the team clearly do not give a shit about the club. London’s 7th biggest team will find it hard going next season and it wouldn’t be a surprise to see them struggle at the bottom again. (Hello Wolves!) Wigan are also in the poo too. With a habit of giving silly late goals away, they are now (as I write this) 3 points away from safety with 2 games to go. The FA Cup Final might be a nice distraction, but is Wigan’s survival luck running out?

Photos from QPR vs Wigan Athletic

- Atmosphere: 5/10 (not the best, despite being so close to the pitch) 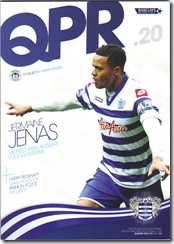