Despite the 3-0 tonking on the south coast I witnessed when I last went to watch Morecambe, the fixture computer had given the Shrimps another early southern away game. This time at the Shrimpers, on the Essex Coast. Having been unavailable the previous two seasons when Morecambe played here, I wasn’t missing it this time and with Morecambe having never lost to Southend, I was looking forward to seeing that continue. 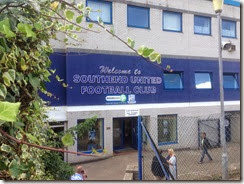 Southend-on-Sea is a unitary authority area, town, and seaside resort in Essex situated within the Thames Gateway on the north side of the Thames estuary 40 mi east of central London. Originally the "south end" of the village of Prittlewell, became a seaside resort during the Georgian era, attracting many tourists in the summer months to its seven miles of beaches and bathing in the sea. Good rail connections and proximity to London mean that much of the economy has been based on tourism, and that Southend has been a dormitory town for city workers ever since. Southend, like many other British sea-side resorts, went into decline as a holiday destination from the 1960s, since flights and hence holidays abroad became more affordable. Since then, much of the town centre has been developed for commerce and retail, and during the 1960s many original structures were lost to redevelopment. However, about 6.4 million tourists still visit Southend per year, generating estimated revenues of £200 million a year. 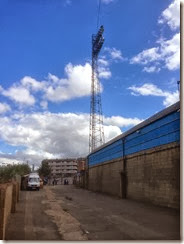 Southend United were formed relatively late in 1906 and played Southern League football until 1920 when they co-founded the Football League’s new 3rd Division. The league was regionalised a year later and in the Southern Section of the League, Southend only ever came close to promotion twice when they finished 3rd in 1932 and 1950. When the league was nationalised in 1958, Southend became a yo-yo team as they floated between the 3rd and 4th Divisions between their first relegation in 1966 and winning the 4th Division in 1981. After the dark days of the 1980s when on the pitch, the Shrimpers were struggling back in the 4th Division and off the pitch, the club lost £70k out of the Christmas savings scheme through fraud, the club turned the corner and began on the up. A double promotion in 1990 and 1991 saw Southend in the 2nd Division and New Year’s Day 1992 saw the Shrimpers top of the league. Had they continued their good form, the club could have become founding members of the Premier League, but they tailed off to finish 12th. Again, the club started to decline, but were back in the newly named Championship in 2007 after a revival from Steve Tilson. Their time in the Championship was short as they were relegated after 1 season and were back down in the basement in 2010 following their 23rd place finish in League 1. They only have looked like promotion contenders once in their 3 seasons back at this level, with a 4th place finish in 2011/12 but were beaten by Crewe in the play-offs. 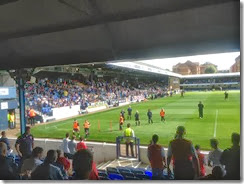 Roots Hall is technically a “ground for concern” as Southend have announced plans to move to a new ground at Fossetts Farm and will hope building work will start soon on an ambitious 14,000 seater stadium. (Average attendance 2012/13: 5,003) Roots Hall’s days are numbered then which is a bit of a shame as it’s a great wee ground, although is starting to show its age. Away fans were housed behind the goal in the North Stand which does provide decent views, although the leg room for the seats is nonexistent so standing is a must. The Main Stand (East) runs the length of the pitch and was originally designed as a section of seating with terracing below, however it was made all seater in the 90s. The South Stand is the strange small two tiered structure behind the other goal which might win the award for smallest two tiered stand in the Football League? With another styled stand of the West Stand, Roots Hall is one of those types of ground which are sadly disappearing over time and will no doubt be replaced by some shite plastic structure on the edge of Southend. 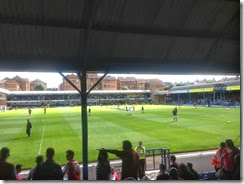 My worries surrounding Morecambe getting going after the Portsmouth defeat were silly as the Shrimps were one of the form teams in the league coming into this game. Sending Exeter and then Plymouth back to Devon with their pasties between the legs was the start and after giving Newcastle a massive scare in the League Cup, we were looking on the up. Being in 13th position, it was a far sight better than the start we had made. The home side had looked to have made a reasonable start in the league with wins over Plymouth, Hartlepool and Northampton before defeats to Chesterfield and Wycombe had brought them back down towards the chasing pack. Still looking good (even though it was early on) in 7th position, a lot of people had this game as a home banker. Yet, in 6 attempts Southend had never beaten Morecambe and I was confident we’d push that and make it 7. 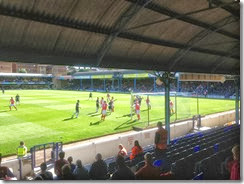 Much like the Portsmouth game, Morecambe started a tad slowly and allowed the fake Shrimpers to come at them. Unlike Portsmouth however, we were playing a system that the side were used to and Barry Roche was in goal leading his defence well. Still, if you aren’t going to start well you need a bit of luck and the Shrimps gained that on 7 minutes when Freddie Eastwood crashed his header off a post with Roche well beaten. Both sides were then stuck in a midfield battle until the 30 minute mark when some awful defending allowed Southend the lead. When Kevan Hurst received the ball on the far side, nothing much looked on. Yet he skipped past two dreadful attempts at a challenge and fired a show low into the bottom corner to give Roche no chance. When it looked like Southend might push on from this, they found themselves pegged back within only 5 minutes. A nothing ball into the box was not cleared properly and Andrew Fleming curled a beauty into the bottom corner from 30 yards. Much like the recent game vs Plymouth, Morecambe had shown great fighting sprits to not be behind for long. With Southend stunned, the game petered out till HT where it looked like anyone’s if they wanted it. 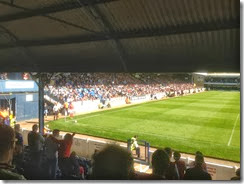 Within 30 seconds of the 2nd half, it was clear who wanted the three points more. A long ball downfield caught Southend out to allow Padraig Amond a clear run at goal but was blocked by Southend goalie Daniel Bentley. However, the ball ran loose after the block and goal hero Fleming was on hand to smash the ball through the people on the line to give Morecambe the lead. It got ever better on 56 minutes when Craig Sampson (who had never scored a professional goal before) crashed home a 25 yard strike to put the away fans in dreamland. Southend, now completely stunned forced a brilliant save from Roche when on loan Fulham youngster Cauley Woodrow fired a header at goal. When it looked like Morecambe would ride out the remaining 20 minutes with ease, Robbie Threlfall stupidly went into a two footed challenge on Anthony Straker and was promptly sent off after only being on for 7 minutes. Now turning into the Essex version of the Alamo, it was a block everything job as defensively Morecambe stood firm with only two Barry Corr chances that were saved by Roche being the difficult moments. 7 times played vs Morecambe, 0 wins for Southend. 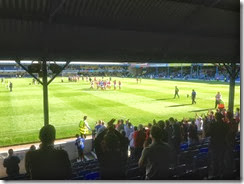 I was delighted to finally get a Saturday in the season where I was free to get to Roots Hall, especially as it was a brilliant performance (bar the opening 10 minutes) from Morecambe to make it 3 wins in a row. It got better too, as the 4th straight win was achieved with a hard fought win at Newport, before a 94th minute equaliser denied the Shrimps a 5th straight win vs Dag & Red. Currently in the play-offs, hopefully we can push on and consolidate this place! Who knows! Southend, seem to be going in the opposite direction with a 1-0 defeat at home to Scunthorpe before scraping a 1-1 draw with Bury to leave them without a win in 5 games. The man with the tan, Phil Brown is under pressure otherwise a shiny new 14,000 stadium will be hosting some massive games against Hyde and Braintree rather than the Football League.

Photos from Southend United vs Morecambe

- Food: N/A – was pre-warned not to eat at ground so was local pub food instead 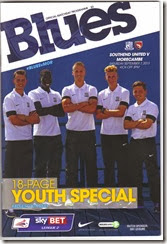 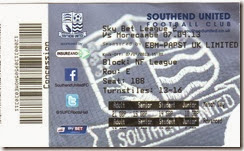