Every now and again there are games that are interesting or quirky enough to pencil them into my “planner” four months in advance. These could be interesting for a variety of reasons and this one ticked all the boxes. A game at a cricket ground that rarely hosts football? Check. A game featuring two teams I wouldn’t normally see? Check. A game that was also for charity? Check. I was on this.

This game was taking place at The Oval, in Kennington. In 1844 the Kennington Oval was actually a market garden, owned by the Duchy of Cornwall. After Surrey CC were established in 1845, The Duchy was willing to grant a lease of the land for the purpose of a cricket ground, and, on 10 March 1845, the club signed a lease with the Otter Trustees, who held the land from the Duchy of Cornwall, 'to convert it into a subscription cricket ground’. The first ever test match in England took place here in 1880 between England and Australia and other cricket history which I won’t go into. (This blog is not a big fan of it) The Oval, more importantly was home to the early days of football by hosting the very first FA Cup final (more on later) and the finals from 1874 to 1892 when the crowds had grown past The Oval’s safe capacity. (32,810 attended the 1892 final between West Brom and Aston Villa) The Oval also held the first ever international football match in 1870 when England were lucky to escape with a 1-1 draw against Scotland. 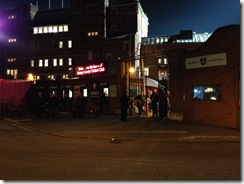 That very first FA Cup final, held 150 years ago saw Wanderers vs Royal Engineers go head to head at The Oval in front of a crowd of around 3,000. While the RE were favourites as they were using a revolutionary tactic of “the passing game”, Wanderers silky dribbling skills won the day as an early goal from Morton Betts was enough. The Field newspaper described it as “the fastest and hardest match that has ever been seen at The Oval" and said that the Wanderers displayed "some of the best play, individually and collectively, that has ever been shown in an Association game". Wanderers dissolved around 1887, but were recently revived again in 2009 with the endorsement of the Alcock family. (C.W Alcock was one of the former Wanderers players and creator of the FA Cup competition idea) They now play with the purposes of raising funds for UNICEF and compete in the Surrey South Eastern Combination (currently at Junior Division 4 – Level 17 of the pyramid), playing their home games at Belair Park, in Southwark.

(Morton Betts goes all Movember on us)

Royal Engineers managed to get over that cup final defeat with a win in 1875 over Old Etonians after a replay. They were one of the strongest amateur sides in existence and could often defeat the professional sides in challenge matches. They also had several players called up to the England and Scotland squads during this time to show the calibre of player that they could attract. The Army FA was then set up in 1888 and its teams were organised by battalion and then regiment. Several regiments and battalions have won the Army FA Cup within the Royal Engineers, including 28 Amphibious Engineer Regiment who won the trophy 9 times between 1990 and 2002. 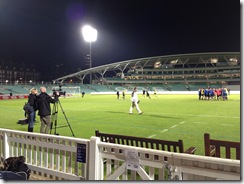 This game was set up to make money for several charities as well as highlight the 150th anniversary of the first final at this very venue. The charities included The Royal British Legion and The Haig Housing Trust which the money was going to. The Oval does look a spectacular venue, especially at night with the pavilion opposite the large OCS Stand which would provide some excellent views of the action. (Just a shame its cricket) With two small stands around the edge of the curve, this to its full capacity (23,500) would be a great site. Maybe a rematch for the very first international so Scotland can win in England again? (*wink*) (NOTE: I am fully aware of the game in 2013 and I am fully aware Scotland will get pummelled) 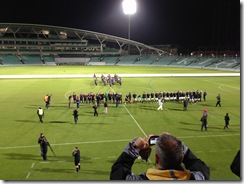 After a rendition of Abide With Me (its a cup final!) the game kicked off and showed straight away the difference in class between the two sides. The Engineers are trained by the machines of the Army PT instructors and can potentially call upon every Engineer out there. (Around 3000) The Wanderers all have full time jobs or at college and so must fit their “training” in around this. It was no surprise then that the Engineers battered the Wanderers in one of the most one sided halves of football I’ve ever seen. Despite playing in a similar style to the classic strips that were used back in 1872, Wanderers were beaten 6 times and could have been many more but wasted chances and saw others saved by Adam Wood. Jay Hubbard opening the scoring on 8 minutes, but the real damage was done with a 3 goal blast in 5 minutes to make it 4-0 after this. Andy Cottam’s 2nd goal of the game, right on HT made it 6-0 and with the game well and truly won, the 2nd half could only be a procession. 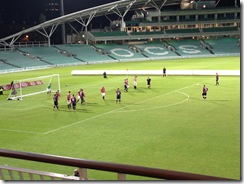 Engineers took a couple of players off at HT, probably to make the game a little more even and credit to Wanderers, they began to push forward a little bit more. Managed by FA Cup legend Bobby Gould, the Wanderers showed far more of what they were about and began to put Luke Cairney under pressure in the Engineers net. Backed on by most of the 2,000 crowd now, Wanderers did appear to have scored their goal when Tom Nicholson finished off a great move but it was ruled out for offside. There was to be no stopping them though (just a shame it had started 45 minutes too late) and when Ross Sibbit got a cross in from the right, Daniel Flash brilliantly powered a header onto the underside of the bar and in. That goal got the biggest cheer of the night as the potentially the greatest comeback ever in the history of football was on. In the end, the Engineers actually dominated the last 5 minutes and Mick Crame finished off the scoring when he lobbed the ball over Wood after being put through one on one. 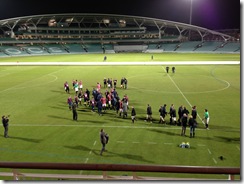 In the end it was easy for the Engineers and they gained some form of revenge for 150 years ago in this re-match. Wanderers want to move on up through the leagues and enter the FA Cup again. They have a long long way to go, but have only been in existence (again) for three years. So good luck to them, lets see where they can go. This game was a reasonable evening out and the match ended with the oldest remaining FA Cup trophy in existence being paraded by the Engineers after West Ham chairman David Gold had kindly lent it for the evening. Dunno when The Oval will host football again, but it offers more excitement that the game that is normally played there!

Photos from Wanderers vs Royal Engineers 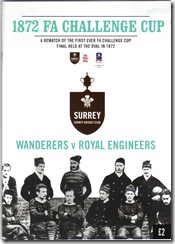