It had been a while (for various reasons, mainly revision) since I’d seen a game and with fellow non-league connoisseur S.Hyde asking to see a game of “proper shit football” (its an endearing term for this level) it was time to head out there. With not a lot of choice out there for the midweek we had selected, I noticed that super Hanwell Town were in action and after they had provided the best 90 minutes of football I’d seen so far this season, there was only one choice. 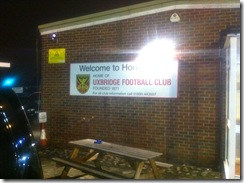 Uxbridge is large town located in west London and is the administrative headquarters of the London Borough of Hillingdon. The name is derived from "Wixan's Bridge” who were a 7th-century Saxon tribe from Lincolnshire who also began to settle in what became Middlesex. Anglo-Saxons began to settle and farm in the area of Uxbridge in the 5th century, clearing the dense woodland and remaining there for around 500 years. Archaeologists found Bronze Age remains (before 700 BC) and medieval remains during the construction of The Chimes shopping centre. The town appears in records from 1107 as "Woxbrigge", and became part of the Elthorne Hundred with other settlements in the area. The Parliamentary Army garrisoned the town upon the outbreak of the English Civil War in 1642 and later established their headquarters there in June 1647. Charles I met with representatives of Parliament at the Crown Inn in Uxbridge in 1645, though negotiations for the end of hostilities were unsuccessful due in part to the king's stubborn attitude. By the early 19th century, Uxbridge had an unsavoury reputation as London’s flour was produced in the area. The jurist William Arabin said of its residents "They will steal the very teeth out of your mouth as you walk through the streets. I know it from experience." Today, it was part of the suburban growth of London in the 20th century it expanded and increased in population into the significant retail and commercial centre it is today. 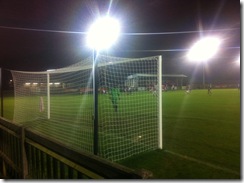 Uxbridge were first founded in 1871 and the team started playing friendly games, until they made their debut in the FA Cup in 1873. However the club folded a year later due to financial reasons, and were reformed 5 years later in 1879. The next 10 years of the club were successful, with the Heron brothers gaining full international caps for England while playing for the club and in 1886 Uxbridge FC amalgamated with Uxbridge Crescents. The amlagmation also saw the club wear red shirts for the first time, which are still the colours worn today, and the nickname "The Reds" first used. The club became founder members of the Southern League in 1894, finishing in mid-table in Division Two and reached the final of the FA Amateur Cup in the 1897–98 season, losing to Middlesbrough. After the First World War they joined the Athenian League however, in 1919–20 Uxbridge finished second from bottom and were relegated to the Great Western Combination League. The club returned back to the Athenian league 4 seasons later and staying in the Athenian league until the 1936–37 season when they failed to be re-elected after finishing bottom of the league twice. After some time in the Athenian League, London League and Corinthian League they went full circle and rejoined the Athenian League. 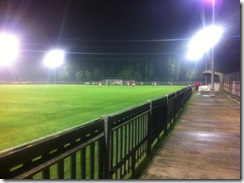 In 1976, Uxbridge made national news when they played England as part of their World Cup warm ups. Uxbridge lost 8-0. Part of the income from this game was spent in 1978 when they bought their current ground in West Drayton, Honeycroft and then spent £170,000 on new floodlights which were opened with a 1-1 draw against Arsenal in 1981. They finally reached the Isthmian League in 1982 after a 3rd place finish in the Athenian League and were there until 2004 when they transferred over to the Southern League where they still play today. Last season a 4th place finish in the Southern League 1st Div Central saw them reach the play-offs, however a 2-1 loss to Bedworth United saw their Southern League Premier dream ended for another season. 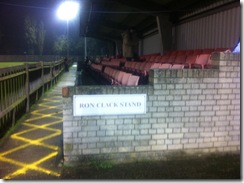 While my pictures are guff as this was an evening KO, Honeycroft is a reasonable non-league ground that fits in fine at this level. With 4 stands on each side of the pitch (albeit all very small so don’t fill the edge) and the ground surrounded by trees and a car park (and for this game, a cold October mist), this would be a fine place to watch football on a Saturday afternoon. It also has a well sized clubhouse and tea bar (which was closed) so it’s just a shame the ground is in the middle of nowhere – near(ish) West Drayton station. Which is nowhere near Uxbridge. In the league Uxbridge are plodding along fine in mid-table but do have a few games in hand on teams around them due to their various cup exploits. Their opponents for this local derby were the famous Hanwell Town (please read my visit here earlier in the season for more info) who since that storming game against Hertford Town, have proceeded to stay in midtable but well above the relegation zone currently occupied by Holmer Green and London Tigers. 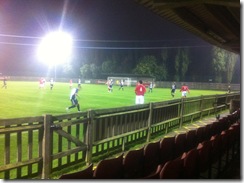 My knowledge of the Middlesex FA Senior Charity Cup is pretty much zero. (And still is) But what I do know is that the current holders are Ashford Town (Middx) after a 4-2 win on penalties last season after the final had finished 4-4. Uxbridge had also played Hanwell in the first round last year too and had won that 3-0. When we arrived, the first thing was to check if TravellingFan’s hero Denis Zadcikis was playing… and he was. Result. It was a shame he and his side’s defence were nowhere to be seen after 2 minutes when Craig Tomkins had the freedom of the left wing to cut inside and fire a shot past Charlie Fanner. While this on first appearance looked like Uxbridge had come out of the blocks well, it was actually that Hanwell looked quite hopeless as their defence and midfield were cut to pieces time and time again. Fanner saved a Tomkins shot as Wayne Carter in the Uxbridge midfield was leading the game. Carter delivered a corner on 28 minutes which found Mark Dennison unmarked in the area for goal #2. This was looking like a long night for Hanwell. That night got longer just 7 minutes later when Shaun Lucien eased past Denis (?!?) and the Hanwell left back before firing in a cross that Nicke Kabamba couldn’t fail to miss. Uxbridge had other chances too as Hanwell came off at HT looking like a team that had just been taught a 45 minute lesson. 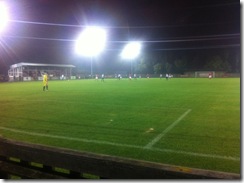 I am still unsure if it was due to injuries or the fact that Uxbridge wanted to take the piss, but they subbed their 3 best players at HT which was a shame as Carter had bossed the midfield in the first half. That might have riled Hanwell somewhat as they scored within 7 minutes of the 2nd half. A long punt down field took out a defence clearly on whisky and cigar mode and Conor Duffy took the ball around Gica Sulmatashvili to make it 3-1. Hanwell pushed forward as the 46 hardy soles watching this wondered if we were about to see a Lazarus like comeback. Hanwell scored another… but was ruled out for offside. And with that, it seemed that. A 20 minute spell of being on top and then they rolled back for the last 25 minutes let Uxbridge dominate. To be fair to the away side, they didn’t concede anymore, however this was largely down to Uxbridge trying to play like Brazil at times and from Fanner making an outstanding save late on from a Matt Woods shot. It finished 3-1 (a slight improvement on last year’s score from a Hanwell point of view) and Uxbridge were through to play Wealdstone in the 2nd Round. 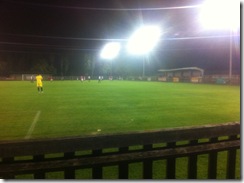 This probably wasn’t the best game to pick for a first visit to Honeycroft, due to being a minor cup competition, played on a Tuesday evening, in the freezing cold. But the hardcore/mentalists who attended this saw a decent game and c.50 of Denis. Who can complain about that? Good luck to Uxbridge for their game against Wealdstone in February. As for Hanwell, I’ll be seeing you (and Denis) later.

Photos from Uxbridge vs Hanwell Town

- Programme: N/A – only a teamsheet available 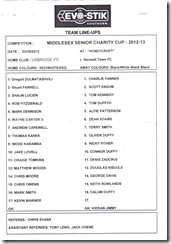