Football nutters always pencil in certain times of the season for games that are most important to them. For example, games against your biggest rivals are normally top of the league. (I must be the only Morecambe fan though that looks for Wycombe away however…) Another one of these games is the FA Cup 1st Round. Some part-timers who have managed to claw their way past teams such as Dereham Town and South Park have a chance to have a crack at some Football League sides. Games I like in this round are when two non-league teams are pitted against each other and there is a chance of a mini cup shock too. And there was one of these games nearby… 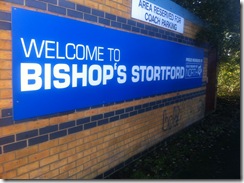 Bishop’s Stortford is historic market town and civil parish in the district of East Hertfordshire and is situated just west of the M11 motorway, on the county boundary with Essex. It is the closest large town to London Stansted Airport and part of the London commuter belt. Nothing of historical significance is known of the Bishop's Stortford area until it became a small Roman settlement on the Roman road of Stane Street between Braughing and Colchester. After the Roman Empire broke down, the small town was abandoned in the 5th century. A new Saxon settlement grew up on the site, known as Esterteferd, probably because a family called Estere owned or controlled the river around which the settlement was based. Over time, this became Stortford. In 1060, William, Bishop of London bought the Stortford manor and estate and the town has been known as Bishop's Stortford ever since. The Normans built a wooden castle in the town, but by the Tudor period it was in ruins (the mound still remains). Development of the town increased with the presence of a river and the roads and a weekly market was set up for farmers to sell their goods. Despite outbreaks of the plague in the 16th and 17th centuries, the town continued to grow with an approximate population of 1,200 by this point. By 1801, Bishop's Stortford had become a market town and a corn exchange had been established while the main industry was malting. In 1842 the railway came to Bishop's Stortford to connect the town to London and help start developing it into the commuter town it is today. 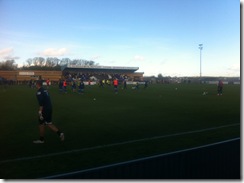 Bishop’s Stortford FC were formed in January 1874 and became founding members of the Hertfordshire FA in 1885. After playing in a series of local competitions, they joined the Stansted & District League, winning it both in 1911 and 1913. The highlight after WW1 for Stort were entering the FA Cup for the first time in 1924 and then entering the Spartan League in 1929. A club seemingly on an only upward curve, they continued to progress after WW2 where they won the Delphian League in 1951 and reached the Quarter-Finals of the FA Amateur Cup in 1963 when they were defeated 1-0 by eventual winners Wimbledon at Plough Lane in front of 9,000. The Isthmian League was joined in 1971 before they finally won the FA Amateur Cup with a 4-1 win over Ilford at Wembley in 1974 – the very last season of the competition. While they did dip slightly towards the end of the 70s, they picked up again in the 80’s with a double after winning the Isthmian League 1st Division and FA Trophy in 1981 with a 1-0 win over Sutton United. They also made a name for themselves in the FA Cup with a great run in 1982/83 when they reached the 3rd Round and a tie vs Middlesbrough. After a 2-2 draw in Teesside, they lost the replay 2-1 with Boro scoring two late goals. 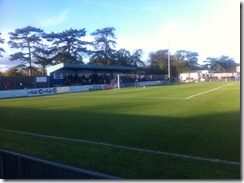 After a yo-yo period in the early 1990’s, they left their old Rhodes Avenue ground in 1997 but didn’t make their debut at Woodside Park until 1999 when they hosted Norwich City and then Tottenham to open the new ground. They were the beneficiaries (among many other clubs) to be placed in the new Conference South when that league was created in 2004 before being moved across to Blue Square North in 2011 after Rushden & Diamonds expulsion from the Conference. Stort were just unlucky that they were the 23rd most Southerly club that season and so had to play near-by teams such as Workington and Blyth Spartans. They have been joined by other “Northern” teams this season such as Oxford City and Brackley, so do have some neighbours joining them. Their current ground of Woodside Park is on the edge of the town quite close to Stansted Airport. A decent ground that has a large main stand on the entrance side with a smaller seated stand opposite it. Behind both goals are covered standing terraces that are both sadly a little shallow, but considering the crowds that the Stort get, the ground is more than enough for them. 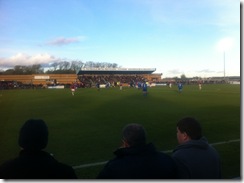 Stortford always have a problem being in the Blue Square North with attracting players who want to travel hundreds of miles every two weekends to such outposts as Halifax and Droylsden. Going into this game, they were down in 19th position and looking like fighting the drop this season. This had all the makings of a cup shock then as Hastings United were in town from 1 step below in the Isthmian Premier League. Hastings had never reached the 2nd Round proper before and having dispatched of Chatham Town, Staines Town, Hitchin Town (after a replay) and Blackfield & Langley to reach this stage. Hastings were also down in the bottom half of their league also and after an 18th place finish last season, it looked like history was going to repeat itself with a struggle. 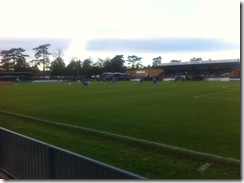 Hastings had brought a fair amount of fans up for this game as they had filled 3 coaches and a few more had made their own way here, so were right up for this with the proper “underdog” show of balloons when the teams came out and general making of the atmosphere. It’s a shame they didn’t start too well however as Stortford made the early running as Steve Cawley and Jesse Waller-Lassen both fired wide as warning shots. It didn’t take long for the home side to take the lead however, as some excellent build up play from Johnny Herd and Danny Green allowed Matt Johnson to fire a low shot from outside the area into the bottom corner as Hastings goalie Matt Armstrong-Ford didn’t even move. The shot did go through a defender’s legs which meant that A-F wouldn’t have seen it until late. Stortford continued to push forward and a Reece Prestedge corner caused mayhem as it went across the goal. Suddenly, Hastings woke up however as they created a chance on 22 minutes as Bradley Goldberg fired a shot that Stort goalie Luke Chambers beat away. Hastings were encouraged by this and spent the rest of the half on the attack at Stortford held back. On 33 minutes their 300 strong fans thought they had an equalizer as Danny Ellis was all alone in the box and his firm header was going in until Chambers amazingly pulled it away, however most thought the ball had crossed the line. Right on HT, crosses from Josh Jirbandey and Zak Attwood found no-one in the middle as this tie was certainly not settled yet. 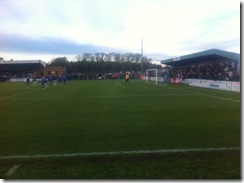 Stortford woke up for a brief 5 minute spell at the start of the 2nd half as Sappleton glanced a header wide and Green fired over before Hastings took control again. They didn’t have it all their own way though as they were lucky to keep their 1 goal deficit after 65 minutes. Cawley was put through on goal and Hasting’s player/manager Sean Ray had to make a last ditch (and great) tackle to stop Cawley having an easy chance. Stortford wanted a red card and penalty but Japanese referee Hiroyuki Kimura correctly made the right call. Hastings looked like they wanted it more as the game went on and got that deserved equalizer on 70 minutes. A deep corner went all the way to the back post and after failing to get anywhere near clearing it, that man Ray smashed the ball into the roof of the net to send 300 Hastionians (?) wild. Both sides went for it now as Stortford probably didn’t want a midweek trip to Hastings and the away side felt they could take a famous scalp here. Chambers saved well again from Bradley Goldberg while at the other end, Stortford sub Blair Sturrock (yes, that one) crossed for Sappleton as his header was well saved by A-F. It was tense as any goal now would win it and the away side claimed that famous scalp with just 3 minutes remaining. A long ball upfield from Ray found Goldberg who fired a low shot from outside of the area. While it was saved from Chambers, he could only parry and Zak Attwood wanted it far more and fired the rebound past Chambers so Hastings could start the celebrations. Stortford were beaten then and it was no surprise they created not much else until the final whistle as Hastings had made history with their first trip into Round 2. 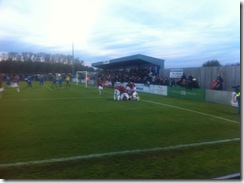 (Big Ray gets the equalizer)

Hastings “reward” for that win is another away tie at a Blue Square North club with a trip to Harrogate Town in early December. (I stress, “reward”) Their form since this game has been patchy though as a win at home to Enfield Town was followed up with a 4-0 pasting at fellow FA Cup 1st Round runners Metropolitan Police (who lost 2-1 to everyone’s favourites Crawley Town). With 5 games to play still (as I write this) in November, squad rotation is definitely on the agenda before that glamour trip to H Town. Stortford have only played cup games since this as they cruised past Berkhamstead in the Herts Senior Cup before dispatching of Blue Square South side AFC Hornchurch in the FA Trophy. Stortford are a decent club and were well organised for their big day so I had a great time here. It’s a shame they couldn’t win it, but Hastings deserve their trip into Round 2 and good luck to them. 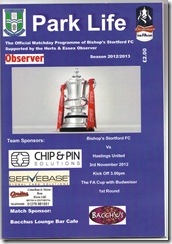