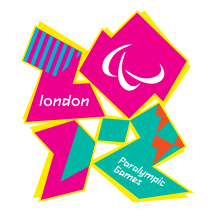 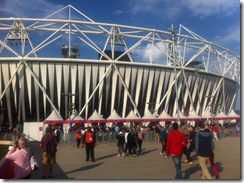 Described by the Paralympics as: Part of the first ever Paralympic Games at Rome 1960, Athletics has produced some of the most iconic images in the history of the Paralympic Movement – with legendary figures such as Chantal Peticlerc, Tanni Grey-Thompson and Oscar Pistorius making their names before a worldwide audience.

Described by me as: A moment I was looking forward to entering the Olympic Stadium for the first (and possibly) only time. A glorious day watching some world class athletics. 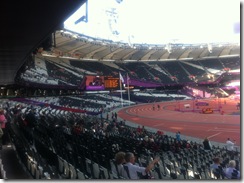 The venue: Ignoring the ongoing controversy over the future of the stadium, the 80,000 seated structure is a magnificent arena that will no doubt change now the Games have ended. The stadium is at the heart of the Olympic Park site, being on an island surrounded by water ways. The innovative flexible design of the Olympic Stadium means its 80,000 capacity can be reduced after the Games. It has a permanent lower tier with a capacity of 25,000, and a temporary steel and concrete upper tier, which holds a further 55,000 spectators, that can be dismantled after the Games.

Facilities for athletes within the Stadium include changing rooms, medical support facilities and an 60m warm-up track. An Olympic Stadium with such a large removable element and mix of permanent and temporary seating has never been attempted before. The Stadium is also the most sustainable ever built for an Olympic Games. The lower tier sits within a bowl in the ground, which minimises the use of construction materials. This bowl was created by excavating 800,000 tonnes of soil, the majority of which was cleaned and reused elsewhere on the Olympic Park. 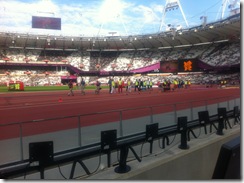 The experience: After getting some decent Category B tickets for the first time in the games, I had no idea where to expect to be sitting so I was quite surprised to be on Row 2 at the very front of the ground. This allowed me to soak up what was a brilliant atmosphere as most of the 80,000ish tickets available for my session were sold. Everyone cheered and supported all the athletes before they started in their events although it was the British ones who got the biggest cheers as they stepped up.

I was lucky to be right in front of the long jump area so had the F11 (essentially, extreme visual impairment) long jump which everyone around me were engrossed in. During the jumps everyone was supportive of the athletes which made the whole session quite special. Us Brits also always cheers an underdog so a special mention to Isatou Nyang of Gambia who got one of the biggest cheers of the day when she finally finished her Women’s T54 800m race despite the other 6 athletes finishing a long time before. All in all it was a delight to be a part of this. 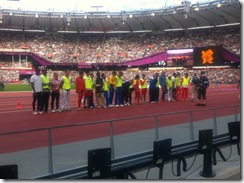 The event was won by Ukrainian Ruslan Katyshev who jumped 6.46m in his first jump which was never matched. Silver was won by the World Record holder Elexis Gillette while bronze was won by showman Li Duan. (His triple jump effort here) The event was a brilliant watch as the medals were always in doubt until the final jumps (sounds obvious but I’ve seen some events where the gold is won early on by a monster jump) and seeing the guides and how they work with the athletes was extremely interesting. The final part of the session was the 3 guys picking up their medals and most of the crowd had stayed to congratulate them on a great competition. 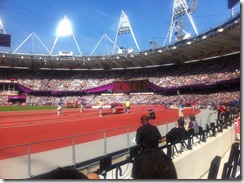 Overall: I was absolutely delighted to have purchased a ticket to the athletics and have some time in the Olympic Stadium. Now the Games have finished, I will be following the future of the Olympic Stadium with interest and I hope to get a ticket for the World Athletic Championships in 2017. (Where-ever I am in the World) Wouldn’t fancy watching football here though… 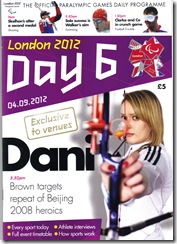