This hobby of mine is normally done on a single man basis, meaning I rock up at these backwater towns alone, armed only with a man bag, phone/camera, wallet and just pure enthusiasm/stupidity. Every now and again however, some poor sod takes pity on me and decides to come along for the fun. This time it was my flatmate who had decided to come along for the ride and after his sheer look for absolute confusion when I told him when we met up for drinks in 2010 that afterwards I was going to Cockfosters FC, it was only fair he could enjoy some Spartan South Midlands League action. 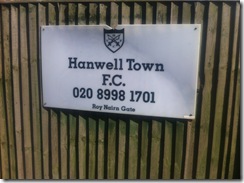 Hanwell is a town situated in the London Borough of Ealing in west London, with the motto of “Difficulties be Damned”. The earliest surviving reference is AD 959 when it is recorded as Hanewelle in pledge, when Alfwyn (a Saxon) pawned his land for money to go on a pilgrimage. The origin of the name is uncertain; various suggestions have been put forward. One is that near to the old Rectory and close to Hanwell spring is a large stone of about a ton in weight. In Anglo-Saxon the word Han denoted a boundary stone. This juxtaposition of these two natural features could have given rise to the name Han-well which dates back to before the Domesday Book. Or The original borders of the parish stretched from the bend of the River Brent at Greenford and followed the river down to the River Thames. Its geography, before the draining of the marshes, formed a natural boundary between the different tribes of the south east of England. This gives some support to the suggestion that Han came from the Saxon han for cockerel. If so, the name is derived from Han-créd-welle. Han-créd or cock-crow meant the border between night and day, and is neither one nor the other. So Hanwell would mean well upon the boundary. 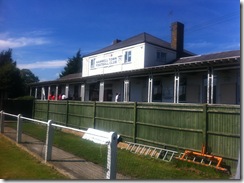 Amazingly the origins of Hanwell Town can be traced back to a group of Geordies who were living in the area at the time and formed the club in 1920, adopting the same black and white kits the Toon played in back up in the NE. They played in the London League until after the War where they dropped back to playing in local football. They joined the Middlesex County League in 1970 but after treading water in there, joined the London Spartan League in 1980 before winning the Senior Division in 1984. Being a member of the Premier Division when the Spartan League amalgamated with the South Midlands League in 1998, Hanwell were placed in the Premier Division South and after taking a couple of seasons to settle saw them playing in the Premier Division. The reorganization of non-league in 2006 saw some teams promoted to well above their level and Hanwell were one of them playing in the new Southern League Division 1 South & West where they promptly finished second bottom and relegated. Since then they have been playing in the South Midlands League and were lucky to escape relegation last season as they finished 21st in the league but as no side came down, then they lived another day. 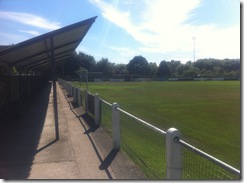 Hanwell have played at Reynolds Field since 1981 as beforehand they have played for over 20 years at the Ealing Central Sports Ground (right next to Perivale tube station). Floodlights were installed in 1989 and have allowed them to play at this level. The rest of the ground is a lot better than I expected considering the lack of pictures I have seen of the ground. The ground is dominated by the clubhouse/changing room block that also strangely, doubles as a nursery. Therefore having a pint surrounded by children’s painting pictures is a strange feeling. A big covered standing area is behind one of the goals (picture above) and a seated stand runs next to the clubhouse building, named the Bob Fisher Stand in honour of the current Chairman. It’s a great little ground and looked even better in the basking sunshine on the hot day. 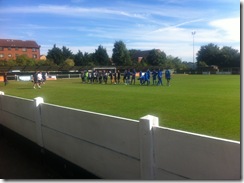 Having only survived last season by a reprieve, the home side have had a fairly decent start having won 3 and lost 4 to put them into midtable 8th. They are however, already 10 points behind leaders Dunstable Town who have started on fire. They welcomed Hertford Town who are only 2 points behind Hanwell but down in 14th. A slight improvement on their 16th place from last season. Despite having only 45 people in the ground, most people there were supporting one team or another which was good. One Hertford fan remarked that they normally started well but have frequently lost leads in games. A bit of a premonition. 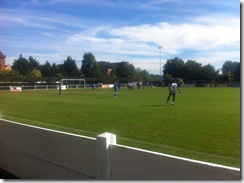 Hertford looked the team far more up for it early on and took an early lead when their top scorer Billy Healey was allowed to run towards goal and fired into the bottom corner to leave Charlie Fanner with no chance. Hanwell hadn’t learnt when another low drive was fired in just 5 minutes later as the home bench and fans were extremely hacked off with the awful start. It took the home side 22 minutes to come into the game when Doug Kisuule was put through on goal but his first time lob shot just went over the bar. But most of the half was Hertford Town as first Junior Bushiri hit the bar from a deflected shot before Healey should have added another when he headed wide when it looked easier to score. Just before HT, Hanwell nearly equalised when a brilliant piece of skill from Kyle Watson took the ball past two players but he fired his shot wide. Relatively entertaining half of football considering the heat. 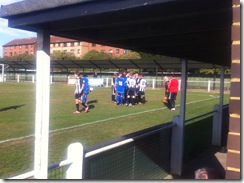 After a normal first half, nothing could prepare us for the one of the most action packed 45 minutes of football I had seen for some time. Hertford started again brightly and when Healey had broken down the right, his low cross was easily tapped in by Chris Bangura to give Hertford Town what looked like an unbeatable lead. Hanwell were reeling until the turning point of the match came on 57 minutes. While I was watching Hertford T’s boss Marvin Samuel strangely ask the linesman if the ball was too flat, a scuffle broke out to the right of me (pic above) and 18 players ended up being involved accusing Hertford’s Bangura of punching a Hanwell player. Bangura’s response was “if I hit him, I would have knocked him out”. After a good 5 minutes of discussion, accusing and counter-accusing, referee Mark Stevens sent off Bangura despite probably not seeing the incident. Hertford nearly scored with 10 men just 4 minutes later when Brissett curled a shot onto the bar. Hanwell managed to compose themselves however and fired themselves to an equaliser with two goals in two minutes. Firstly a long ball to the back post found Martin Rowlands who controlled the ball well and fired a low shot into the bottom corner. A minute later, Hertford couldn’t clear the ball properly and when Hanwell got a lucky break to put Kisuule through on goal and he finished under Jake Knight to make it 2-2. Hanwell’s bench went mental with the equalizer and then we played out the last 20 minutes with both sides looking like they could win. The home side brought on Dennis Zadekis who seem to waste chances much to the home side’s annoyance. Hanwell did cap an extraordinary turnaround with a 90th minute winner when George Davis picked the ball up on the edge of the area and crashed home a wonder shot into the top corner. Hertford were beaten but still had time to get a 2nd red card when Jason Walker was sent off for spitting at Dennis. Breathless. 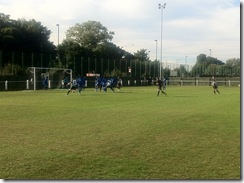 As I explained to my flatmate, not every game I get to see is as good at this. (Cockfosters and Hatfield Peverel come to mind) The SSML don’t release their fixtures throughout the season, however I will be looking out for the Hertford vs Hanwell re-match as it will surely be fiery. Hanwell are a decent club and despite being nowhere near the central areas of London, are worth an effort to get to. Good luck to them for the rest of the season. 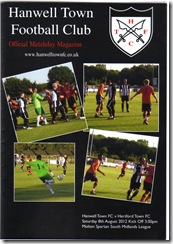