The Road to Wembley is beginning again. Every September, hundreds of clubs set out to try and have their big day under the Arch but most will fail. Stories are made, legends are born (lets big this up as much as possible) and games are remembered. The FA Vase is my favourite knockout competition and after following it through last season, it made sense to do the same this time out. For 2011/12 I picked a nearby Combined Counties League side in Croydon FC and that worked well so repeated the trick this time out. Off to Colliers Wood! 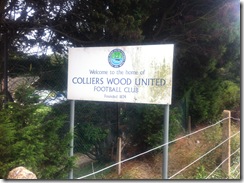 Colliers Wood is an area in south west London, in the London Borough of Merton. Colliers Wood takes its name from a wood that stood to the east of Colliers Wood High Street and remained at least until the 1870s but had been cleared for development by the mid-1890s. It is home to 12th Century ruin Merton Priory which is where Henry VI was coronatated in 1437, making him the only Royal in the past 1000 years to have their coronation outside of Westminster Abbey. Today the landscape is dominated by the Colliers Wood Tower, which recently won a Shit London award for worst building. It was originally occupied as the HQ for property company Ronald Lyon Holdings before they went bust as part of the collapse of the commercial property market in 1978. It today, remains un-used and proper shit. 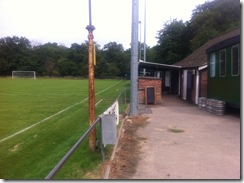 Colliers Wood United are actually one of the oldest clubs in Britain, being founded in 1874 as Vandyke. The early years of their existence were spent in the Wimbledon and Sutton leagues before moving eventually to the Surrey Intermediate League. They moved leagues again in the late 60’s to Surrey Senior League where they won the 1st Division in 1969/70. Off the field their old recreation ground was holding them up in terms of progressing up the pyramid and so they moved to the Wibbandune Sports Ground in 1991 (when they also joined the Surrey County Premier League) and the facilities have improved over time. The name changes have happened too with Vandyke becoming Vandyke Colliers United in 1997 (when they won the Surrey County League) before changing their name to their current name in 1999. 2003/04 saw CWU join the new Combined Counties League Division 1 and saw them promoted into the Premier Division that same season after a 2nd place finish. Midtable finishes have been the norm since then with a 19th place finish last season. 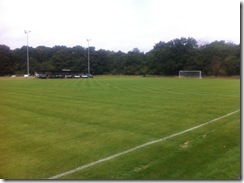 The Wibbandune Sports Ground is a strange venue, with the actual ground being slightly basic. A main clubhouse/changing room block sits on the entrance side of the ground with some space for a few cars. (CWU attendances mean this small car park is a good size) Alongside the clubhouse block is a covered standing area with a few benches that can allow a nice seating area towards one of the goals. Opposite that is a identikit seated stand that they’ve probably had to install to get the ground grading for this level. While this ruins some grounds with ridiculous plastic stands looking out of place, for some reason, it works as it adds more to this ground. With hard standing the rest of the way round the pitch and the ground enclosed by a lot of trees, this should be a great place to watch football. However, the atmosphere and ambiance is ruined by the Kingston Bypass that runs directly next to the ground. It’s not Colliers Wood fault but the noise of cars whizzing past does detract from the pleasant setting the actual ground is in. 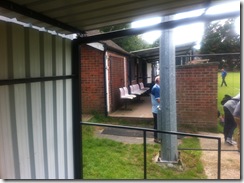 Colliers Wood have had a good run in the FA Vase over recent seasons as last time out they crashed out in the 1st Round after dispatching of Dorking and Redhill before South Park put them out. In 4 of the past 7 seasons they had also won at least 3 ties in the Vase to prove more of their pedigree. They were facing fellow Combined Counties League side Badshot Lea in this tie, who hail from a small town outside of Aldershot. The town’s Wikipedia page brilliantly describes the place as “though apparently pleasant, in recent years the village has been victim of several unsavory drugs related offences including stabbings, dealing in broad daylight, and the discovery of a cannabis factory. Further serious crimes have been committed in the village including horse stabbing, repeated distraction burglary, and anti-social behaviour.” Badshot had actually started better in the league being in 6th position prior to this game although they hadn’t won a game in the FA Vase since 2009 when they beat Faversham Town in the 2nd Round. 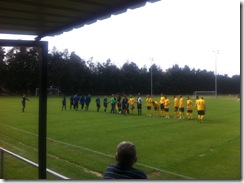 As soon as the game kicked off you could notice the two different styles of play that both teams adopted. Colliers Wood went for a more direct approach but not in a Stoke/Bolton style neck craning way but just getting forward at every occasion and using their pacey wingers. Badshot on the other hand were taking it slower and passing the ball around which seemed to work as they began to put Dan Burnett in the home goal under some pressure. Some crosses were finding Badshot strikers unmarked but their headers wide fired wide or shots fired over. Some of these were great chances too that a more controlled player would have buried. As is normally the case in games when one team dominates, the other side come straight back into it and they were helped by a bizarre injury to a CWU player. When a midfielder jumped up to win a header, he fell to the ground in a lump and had to be carried off after sometime due to a knee injury. His replacement Rob McCarry, came on and opened the scoring on 39 minutes when he received the ball on the edge of the area and fired a low shot in off the post. Badshot’s ropey defending could have cost them a couple more goals before HT but they went in 0-1 down much to the anger of their players. “We are weak as piss”. Indeed. 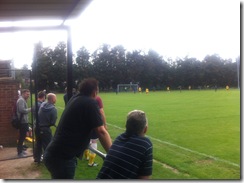 The 2nd half saw CWU play a little deeper as they allowed Badshot to come and attack them in the hope of hitting them on the break. The home side seemed to have it under control as well as the first 15 minutes of the game were played at a slow pace with not much action. Badshot should have then equalized just before the hour mark but then did so after 61 minutes played. A throughball saw Adam Cornell and Burnett come together as well as a back tracking defending. It did look like Burnett had saved it but the ball had come away to allow Cornell to get up quickest and fire the ball into an empty net. It looked now to all that Badshot would go and win the game now, especially as they seemed so much more up for it then CWU. However, if you can’t defend, you probably won’t win. The Wood played a rare long ball up over the away defence and Swaby used his pace to dart away and slot the ball past Matt Watson in the away net. Badshot really went for it but CWU booked their place in the 2nd Qualifying Round with a late carbon copy goal of the 2nd on 90 minutes when Nathan Turner was put through and he made no mistake from close range. 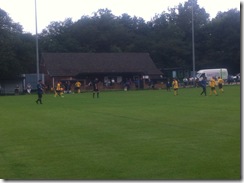 Colliers Wood now play another fellow Combined Counties League side in the form of Camberley Town in the 2nd Qualifying Round after they squeezed past Epsom Athletic with a 4-3 win. The two sides have already met this season in the league and Camberley won that 1-0 with a late late goal. Badshot Lea can lick their wounds from another FA Vase defeat with an impressive FA Cup run where they are still in the competition with a 2nd Qualifying Round match against Isthmian League side Leiston. CWU have lost both of their games played since this game as a warm up to the Camberley match – oops. If you are in London and are in need of game, there are a few clubs that should be higher on your list to visit instead of this one. I received a pretty cold welcome (not expecting a party upon my arrival before anyone remarks) and from behind the bar to put me off going back. Good luck to them though in the upcoming Vase game, it should be good. 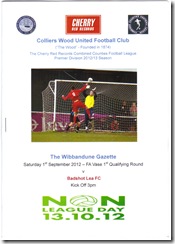