The Play-Off season always brings with some interesting games as clubs look to use whatever energy they have left to try and haul themselves up to promotion despite finishing 20 odd points behind the League winners. I’m a massive fan of the play-offs in any league as it extends the drama and excitement for a lot longer than straight promotion slots would and allows the smaller clubs to have their big day out, normally in front of a four figure crowd. As Sutton United saved me from the wank evening that is Valentine’s Day (no pun intended) earlier this year, I joined their fans for a big game away at Welling for the 2nd leg. 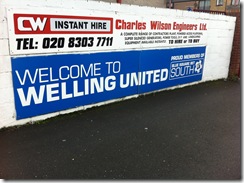 Welling is a district in the London Borough of Bexley and is a suburban development situated between Shooter's Hill and Bexleyheath. The East Wickham part of Welling is probably one of the oldest settlements in this area as a Neolithic stone axe was found in 1910 and more recently in 1989 the remains of Roman buildings were unearthed near Danson. Before the coming of the railway, with the opening of the Bexleyheath Line in 1895, Welling was a village on the main road between London and Kent. It had been a traditional staging post for coaches; the presence of three inns along the main road is the result of that. Local legend has it that Welling is so called because by the time you reached it you were "well in" to Kent, and had thus survived the treacherous coach road up and down Shooters Hill, the highwaymen who were said to frequent it, and the forests which until the 1800s stretched almost down to Blackfen. After World War I, Bexley Urban District Council built over 400 houses north of the railway. Later, when the Danson estate was sold to developers, the land to the south was opened up to suburban sprawl and the settlement incorporated the local parishes of St Michael's East Wickham and St Johns Welling. 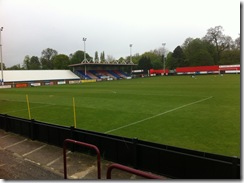 Welling United were founded only in 1963 by Sydney Hobbins (the ex Charlton Athletic keeper) for his sons as they began life in youth football, playing on a local park pitch. They expanded over time and joined the London Spartan League before moving into the now vacated Park View Road ground after Bexley United were dissolved in 1977. Their upsurge continued in 1981 when they joined the Southern League Southern Division before moving up to the Premier Division following restructuring. Welling kept on going up and up and after amazingly winning the Southern League in 1986, the joined the Football Conference. They were round the bottom half of the table throughout their time in the Conference, but finally lost their battle in 2000 and were relegated back to the Southern League. After consolidating in the Conference South, Welling hit some financial trouble after owing £60,000k to HMRC and were hit with a 5 point deduction for 2010/11 season. They only missed out on the play-offs by a point, but have gone one better this season after finishing 3rd. 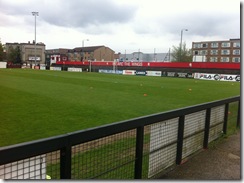 Their Park View Road ground is a strange one with it being essentially two grounds in one. On the Welling side, is their main entrance and a classic old stand that was first built in 1950s and then expanded during the 60s. With two uncovered standing terraces behind each goal, the other side is the Erith & Belvedere side who have been playing at the ground since 1999 and financed the new stand in 2001 when they sold their old Park View ground. This does give the ground a strange classic and modern twist, but it’s a great place and in good condition. I wish one of the terraces had a roof as the weather was awful and would improve the acoustics even more. This would easily host Blue Square Premier football again if it were needed and away fans should have a good day out. 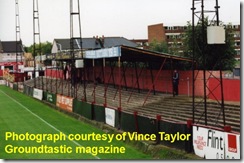 Welling United were the best of the rest this season in the Blue Square South as Woking (eventual Champs) and Dartford fought it out at the top. While they finished 16 points behind Woking, they were safely in a play-off spot all season as they finished on 81 points, 7 points ahead of 4th place Sutton United. Their excellent season was built on the back of an exceptional home record which saw them win 14 out of 21 and only 1 defeat. (strangely a 1-0 defeat to midtable Eastleigh) Sutton United since I witnessed that 2-1 win over Boreham Wood easily made the playoffs and had 14 points to spare over 6th place Chelmsford City. Their form had slipped though as they stumbled to some defeats (including two against Dartford, who completed a 7-1 aggregate victory over them in the league this season). That average form had continued into the 1st leg as well as Welling were coming home with a 2-1 advantage. Goals from Clarke and Healy giving the Wings the advantage… 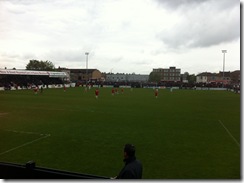 Sutton had to attack and they came out the stronger of the sides putting the home team under pressure from the off. Welling goalie Craig Holloway may have been tested as early as the 7th minute but a great block from Jamie Day on a Craig Dundas shot saw the danger cleared. The Sutton pressure continued as they won a succession of corners but the delivery was shocking (as was the use of short corners – THEY DO NOT WORK!) and they were all easily cleared. The pressure started getting to Welling too as they were constantly on the backfoot so started to employ the same tactics the 1986 Uruguayan World Cup and hack Sutton players down at every opportunity. Jack Parkingson was first into the book for an outrageous tackle on Dundas before Andy Sambrook also made got a yellow just before the half-time break. By this time Sutton had produced a golden chance when Romone McCrae was put clean through on goal but he never looked 100% confident and his shot was kept out through a save by Holloway and a clearance from Ben Martin. Welling created little in the 1st half but Loui Fazakerley fired a shot wide late on. 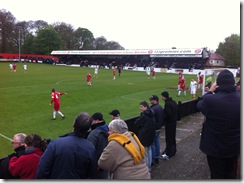 Once Sutton got to grips with playing down the slope, it was all them for the 2nd half as well as they tried to find the goal that would level the tie. Welling created one excellent chance all game when Luis Cumbers got away down the right and his cross was met by a Loick Pires diving header, but Sutton goalie Wayne Shaw made an excellent save with his legs to keep them in the game. Sutton now bombed forward as they had all of the possession and Welling were now beginning to defend well as a unit and not resort to the “strong” challenges we saw in the first half. Tony Taggart had a shot on the edge of the area which was only just deflected wide for a corner after Holloway had punched a shot from Martin to him. Sutton had a lot more dead ball situations but the delivery was poor again as Welling hung on as the game entered injury time. You always felt Sutton would create one final chance and they did in the 95th minute when a cross to the back post found Craig Watkins all alone but he could only fire into the side netting. A glorious chance. And with that, the final whistle blew, Welling were into the play-off final. 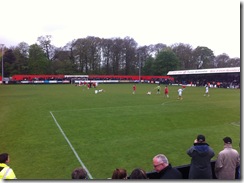 They now play Dartford in an all Kent Final (after they beat Basingstoke Town 3-1 on agg) to be held at Dartford’s Princes Park to see who joins Woking in the Blue Square Premier next season. The game has already sold out too so an excellent crowd and atmosphere should be there for that game. Having heard good things about the football Dartford play, I feel Welling are in for a tough game, but this is the play-offs, so anything can happen. Sutton United can still take a lot of heart from their first season back at this level. If they can maintain the current squad then they should be up in the Top 5 again next season. Their fans are a smashing bunch so I hope I’ll see them on the road again next season at some point. I’ll pencil it in now… ;) 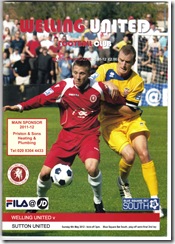 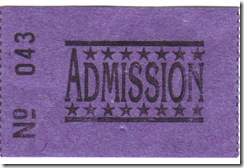