As I didn’t get any hockey tickets for the Olympics (although I didn’t actually apply for any to be honest) I was keen to see a game at the Riverbank Arena so snapped up a ticket for opening games for the Riverbank. 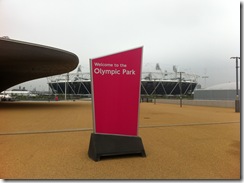 Firstly, getting in. For May 2nd the Olympic security measures were in place and being tested for the actual games in July/August. From my experience, the checks were slick and from getting into the gate to being able to walk through the Olympic Park towards the venue took 5 minutes max. The Park (the parts I saw) are starting to take shape too with the landscaping now in full swing as well as the McDonalds (which will be Europe’s biggest) and other outlets. 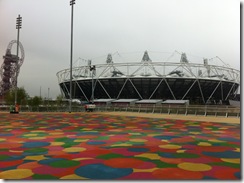 The Riverbank Arena is located in the North section of the Park and is a great (albeit slightly temporary venue) with 4 stands of of temporary style seating. The Arena is set to be moved NW towards Eton Manor after the games and become a permanent part of the legacy of the park with a capacity of 5,000 (raised to c.12,000 for major events). It currently holds 15,000 and is dominated by the actual pitch which is coloured “London Blue” to help the yellow ball being seen on HDTV. It’s a great venue and every seats seems to provide an excellent view so top stuff if you read this and have a hockey ticket – you’ll have an excellent view. 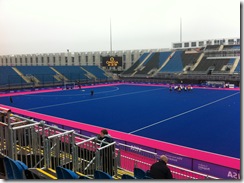 The tournament for the London Prepares Series is the Visa International Invitational Hockey Tournament which brings together 4 women’s teams and 4 men’s teams for a round-robin tournament. As I only got tickets for the opening women’s games I won’t bother chatting about the men’s games. The women’s tournament featured GB, Argentina, Korea and China who are all in the top 8 in the world so I was looking forward to some excellent hockey. 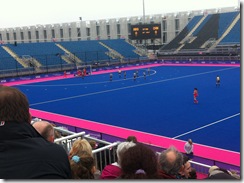 Argentina showed why they are one of the best teams in the world by taking apart China and making them look very ordinary in the process. First half goals from Daniela Sruoga, Carla Rebecchi and Silvina D’Elia had the game sown up at HT but Argentina still continued to dominate the 2nd half and if they had converted more than one of their 13 penalty corners they won, they scoreline would have been embarrassing. China did have a couple of shots late on when Argentina had slowed down but they never fully tested Laura Del Colle in the Argentine net. One final point, if you get a chance to watch Argentina this summer, do so. Very easy on the eye. 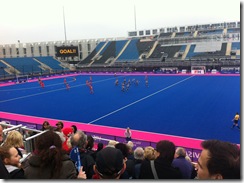 A game I actually enjoyed more due to both sides being fairly close in terms of ability as GB scraped past Korea with a nervy 1-0 win. The first half wasn’t great as the Korean defence easily had an answer for everything GB threw at them and occasionally tested home goalie Beth Storry themselves. Korea did eventually run out of steam to allow GB to create more gaps and 8 minutes from time a brilliant finish from Alex Danson got them home to start the tournament with 3 points. Added bonus for the brass band that managed to get their instruments through security and so we had a great atmosphere for this game. 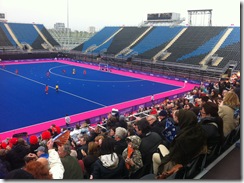 A good day out at the Riverbank Arena and I’ll certainly be watching some of the hockey during the Olympics proper. GB Women went on to win the tournament, impressively beating Argentina 2-0 in the final and so will be one of the favourites (as well as Holland and Argentina) to win gold in August. Good luck to them! For only £10 (+ £2.75 booking fee) and a free tournament programme it was great value too. 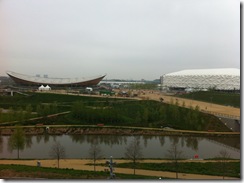 (The view from the top of the Riverbank Arena) 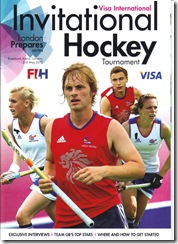 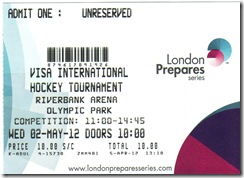