Way back in January a work colleague had convinced me to go watch his Macclesfield Town side play at AFC Wimbledon, a decision after 90 minutes of woeful football I regretted. So when the same colleague asked if I wanted to go all the way up to Bradford to watch a now relegation threatened Macclesfield side play in his home city, the answer should have been no. But when have I turned down football? And piss poor football at that. 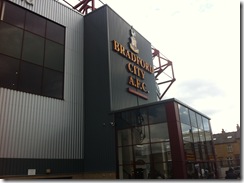 Bradford is a metropolitan borough of West Yorkshire, situated in the foothills of the Pennines. Historically a part of the West Riding of Yorkshire, Bradford rose to prominence during the 19th century as an international centre of textile manufacture, particularly wool. It was a boomtown of the Industrial Revolution, and amongst the earliest industrialised settlements, rapidly becoming the "wool capital of the world". The area's access to a supply of coal, iron ore and soft water facilitated the growth of Bradford's manufacturing base, which, as textile manufacture grew, led to an explosion in population and was a stimulus to civic investment which is still seen today through the grand Victorian architecture present in the city. The textile sector in Bradford fell into decline from the mid-20th century and so Bradford has faced similar challenges to the rest of the post-industrial area of Northern England, including deindustrialisation, housing problems, social unrest and economic deprivation. i.e – it’s a bit of a shithole that sadly suffers from fragmented, segregated ethnic communities. 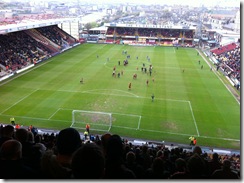 Despite being a city that holds a (formerly) world class rugby league side in the Bulls, Bradford City are still an excellently supported side that have a long history themselves. The club were founded in 1903 and instantly joined Division 2 as the Football League saw the club as a chance to promote football in the rugby league dominated region. The football experiment seemed to work as in their first season they finished 10th and regularly attracted around 11,000 fans. They won promotion to the 1st Division soon after and even won an FA Cup in 1911. After the war their fortunes dropped and were relegated in 1922 to Division 2 and then dropped to Division 3 in 1927. Despite a brief upturn following the return of boss Peter O'Rourke, they continued to float around Division 3 until being further relegated to Division 4 in 1961. Becoming a yo-yo side, it did look at times that Bradford would drop out of the league all together and possibly follow the same fate as Bradford Park Avenue who fell in 1970 to never return to the FL. The 80’s saw Bradford go higher when another promotion to Division 3 before winning the league in 1985. This was however overshadowed by the awful event of the Bradford City fire when a flash fire consumed one side of Valley Parade during their final game of the season against Lincoln City and left 56 people dead and over 200 injured. 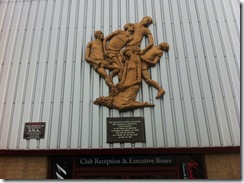 Playing away from Valley Parade while work was done to improve the ground; they played at Huddersfield, Leeds and Bradford Bulls grounds while other grounds across the county also reacted to the fire hazards that their stands essentially were. (Including Lincoln, who committed £3m to improving their ground afterwards) Bradford were taken over in 1994 by Geoffrey Richmond who promised promotion to the Premier League in 5 years and they achieved it with promotion to the top flight in 1999. Those days are long gone however as financial troubles and relegations have left them back in League 2 (4th tier) and amongst the strugglers at the bottom. Bradford though can argue they have the best ground at that level with Valley Parade a dominating feature of the Bradford skyline. With two massive stands of the Carlsberg and Main that provide excellent views as well as the smaller ends on the other side. With a capacity of 25k (although they never touch that now), Valley Parade is an excellent, modern ground to see a game at. 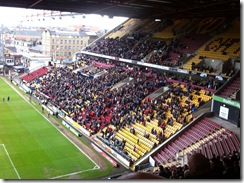 The football on the other hand seems to be the problem. Despite expecting promotion every season, Bradford recently have fallen away since their relegation in 2007. Finishes of 10th, 9th, 14th and 18th last season were poor and they were coming into this game in 18th, still needing 1 more point to officially secure their safety for next season. Their opponents though were right up against it, when you don’t win a game for 4 months you find yourselves in trouble and Macclesfield Town were really in trouble. Down in 21st place and 3 points from Barnet and safety, they had to win all 3 of their final games to really give themselves a chance. Since that Wimbledon game in January, Macclesfield have played 16 games and picked up just 7 points. Relegation form. They still had three games to play however and they had beaten Bradford 1-0 back in October at Moss Rose, so this was a tough one to call. 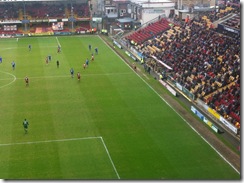 The opening 10 minutes of this game was fantastic, with both sides clearly wanting to have a go and Macclesfield adopting a very high line as they went gun-ho in an effort to snatch an early goal. Bradford though had the opening chance as a long ball over the top sent Nahki Wells clear on goal but Jose Veiga saved well. Macclesfield counter attacked from this but Bradford big man, Simon Ramsden cleared it away. On 13 minutes, the away side should of scored. When Arnaud Mendy headed Lewis Chalmers’ into the box, Ben Mills had a good chance to volley home but he fired miles over, which summed up Macclesfield’s season so far. (only 39 goals scored so far this season) After this, both teams must have realised who they were and it turned into the scrappy, stalemate I expected before hand. Colin Daniel had one final chance for the Macc Attack at the end of the half but fired wide. 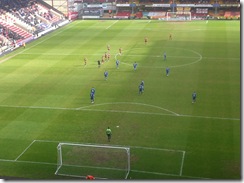 The 2nd half was quite dire early on, with zero chances of note. Bradford did push forward at times though and Mendy ended an attacking run from Wells by hacking him down by the corner flag. Mendy was yellow carded and the ball in from Craig Fagan found James Hanson. His header towards goal was fairly weak but it came off Mills before Veiga could get a hand to it and now Macclesfield were right in the shit. The game became really scrappy now which was best summed up when Veiga clashed with Wells after the Bradford man caught him accidentally while chasing a loose ball. This brought a little scuffle while Bradford fans chanted, “GOING DOWN, GOING DOWN, GOING DOWN”. (Slightly ironic considering Bradford will probably be down there again next season). Towards the end of the game, it was only Bradford who looked like scoring with Deane Smalley forcing a good save from Veiga as did Ravenhill. Macc Attack never really troubled Matt Duke as they fizzled out while Bradford secured League status. 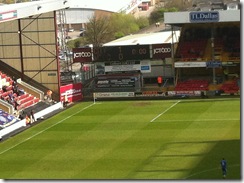 Macclesfield now had two games to save themselves, but a 2-0 defeat to Burton Albion, as well as Barnet honking AFC Wimbledon 4-0, meant that their Football League status was over as they dropped back to the Blue Square Premier for the first time since 1997. Bradford really do need to improve for next season otherwise they could quite easily be in Macclesfield’s position. Valley Parade is a massive ground that deserves to be hosting a higher level of football which looks unlikely anytime soon. A top day out with two work colleagues, so cheers to Phil and Jonny for excellent company! Another Macc Attack away trip looks on next season, let’s get our maps out to Woking or Ebbsfleet! 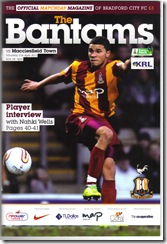 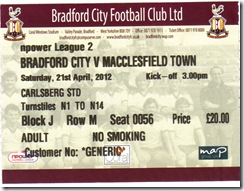