A final castaway to a Saturday evening, set at times that neither side’s fans could get home from. Teams playing weakened sides as they see the competition as a hindrance and going to Brackley Town and losing. (Hello Gillingham!) TV execs picking dreadful Premier League based ties that fail to take into account the romance of it all. It hasn’t been a good recent history for the FA Cup and the fear is clearly there that the competition is on its arse. The 3rd Round draw this season wasn’t the best either with very few standout ties. Step forward however, plucky Macclesfield Town who hosted struggling Championship side Sheffield Wednesday. The town got behind it too – with the game a sell out and thanks to Macc Phil (who I’d seen the Macc attack with at Wimbledon, Bradford and Barnet) we’d be there. The magic of the FA Cup. 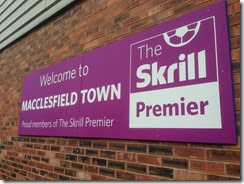 Macclesfield is a market town within the unitary authority of Cheshire East, and the county of Cheshire. The Domesday Book records the town as "Maclesfeld" and in 1183 it was referred to as "Makeslesfeld”. The English Place-Name Society gives its name as being derived from the Old English name, Maccel and field meaning `Maccels' open country'. Macclesfield was granted a borough charter by Earl Ranulf III of Chester, in the early 13th century and was the administrative centre of the Hundred of Macclesfield, which occupied most of east Cheshire. In the uprising of 1645, Charles Stuart and his army marched through Macclesfield as they attempted to reach London. The mayor was forced to welcome the prince, and the event is commemorated in one of the town's silk tapestries. Macclesfield was famously once the world's biggest producer of finished silk with 71 silk mills operating in 1832. Macclesfield is the original home of Hovis breadmakers, produced in Publicity Works Mill (commonly referred to as "the Hovis Mill"). It was founded by a Macclesfield businessman and a baker from Stoke-on-Trent. Hovis is said to derive from the Latin "homo-vitalis" (strength for man) as a way of providing a cheap and nutritious food for poor mill workers. 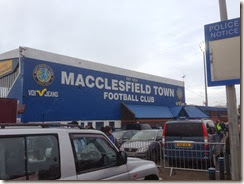 Macclesfield Town (now referred to as the Macc Attack for the rest of this post) were first formed in 1874 and started out playing rugby union rules. (Some clubs would argue they still play by these rules today…) They played under a combination of names until football resumed after World War 2 when Macclesfield Town FC Ltd were created and the Macc Attack were truly born. The club joined the Cheshire County League and saw their first real successes in the early 50s and 60s, which saw league titles and reaching the FA Cup 3rd Round for the first time in 1968. The club were also founding members of the Northern Premier League (along with currently FL sides Wigan, Morecambe and Fleetwood) and won the competition in the first two seasons. Despite the excellent early start, the Macc Attack were relegated in 1980 when the stronger teams in the Northern Premier League founded part of the Alliance Premier League (or the Conference). It took Macc a while to get up to this level, but they rebuilt and achieved this in 1987. 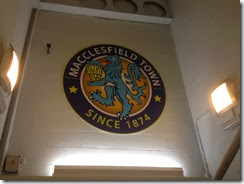 Again, Macc Attack started off well in their new surroundings but started to struggle and so Sammy McIlroy was brought in as manager. McIlroy changed the club for the better as a positive approach was taken and they won the Conference title in 1995 but could not take promotion due to Moss Rose having too few seats. They won the title again in 1997 and could finally take their place in the Football League after work had been done on Moss Rose. McIlroy kept them going and Macc Attack were runners up in Division 3 so gain a 2nd successive promotion. This was as good as it got however as Macc started on a downward trend and after Ince nearly took them down back to the Conference (sound familiar?), years of fighting against the drop could not be avoided in 2011/12 as Macc returned to the Conference. 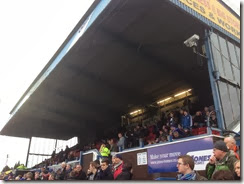 Moss Rose is a ground that is clearly under the “old-school” category for the Conference. Being Macclesfield’s home since 1891, the ground is dominated by the large Main Stand which reeks of being from a bygone era, but actually only dates from 1968. With no supporting pillars in the way of it, views from the Main Stand are excellent with terracing around and under it. Opposite the Main Stand is the more modern Henshaw’s Stand from 2001. An all seater stand that also has the hospitality areas at the back to give the ground a more modern look. Behind the first goal is a strange seated and terrace combo of the Star Lane End. The seating actually in front of the terracing as it was added on later to ensure the Macc Attack complied with Football League rules. Finally, just to add to the old school feel of the ground was the uncovered, large terrace behind the goal. 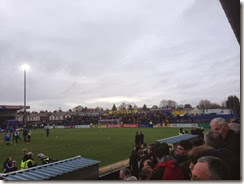 The Macc Attack had a cup run last season that was only ended with a narrow defeat to the eventual winners Wigan. The board used the money and the last remaining pennies to try and push towards promotion but it didn’t happen. Giving ex boss Andy King too much money for no return means the club are now suffering financially with the board desperate for extra investment. Despite a slow start, September saw them start a run (including a win at Barnet) and Macc were now making a play-off charge in 11th place. This season’s cup run had been kind, all home games with Vauxhall Motors battered (7-0), Swindon battered (4-0) and Brackley Town just scraped past (3-2) to set them up nicely for this. Wednesday were good opponents. Having a dreadful time in the Championship, they were hovering just outside the drop zone and with a caretaker boss in charge since the sacking of Dave Jones. This was going to be a proper cup tie. 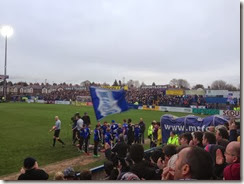 With the grey skies (when is a classic cup game played in the baking sun!?) threatening rain, Wednesday made some of the early running before the Macc got right into it. Possibly not liking the up and at them approach, Macclesfield were unlucky not to take an early lead when Joe Connor’s header was cleared off the line. Macc were pushing forward when they stupidly got done on the counter. From their own corner, Macc tried a training ground move that within 10 seconds had allowed Wednesday to win a contentious corner. Big Reda Johnson was unmarked from the cross and powered a header past Rhys Taylor for a 25th minute lead. Macc Attack were rocked and Wednesday were unlucky not to be 2 up before HT as Taylor made an outstanding save from Jose Semedo. Wednesday did not look impressive and so everyone knew Macc had a chance in the 2nd half if they went for it. 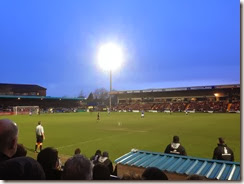 Macc really did go for it! Winning more and more possession, they began pushing Wednesday back and creating more chances. Firstly, Chris Holroyd had a header from a corner cleared off the line with Wednesday keeper Damián Martinez beaten again. Scott Boden was then put through in the clear but Miguel Llera managed to track back and stop the chance before he could get his shot away. A frantic half saw Macc keeper Taylor make another fine save from a Jeremy Helan strike before Martinez did even better to keep out Danny Whitaker’s half volley. The pressure Macc had put on a team 3 leagues above them had been a fine effort and they were finally rewarded on 72 minutes when Steve Willilams stuck out a leg to divert a long ball in. Moss Rose was bouncing at that equalizer as Macc really really went for it! Neither keeper was particularly tested in the final 20 minutes though as a replay was required. (And probably the right scoreline on the day) 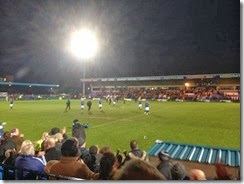 The replay at Hillsborough earnt Macc a fine pay day in their quest to close the financial hole they have and an away crowd of around 1,500 also boosted this. In the end, Wednesday did have too much for them but not without a scare as Scott Boden’s penalty cancelled out Chris Maguire’s opener. Scott Kay then had a glorious chance to put Macc in front but his shot struck the bar before late goals from Jacques Maghoma, Jermaine Johnson and Miguel Llera put Wednesday through to Round 4. A mightily brave effort over 180 minutes from the Macc Attack though. 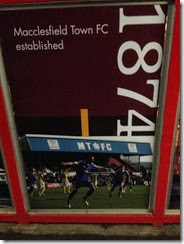 Wednesday’s “reward” for this win was an away tie at Rochdale. A difficult and unglamorous game is probably not what they would have wanted. It is a winnable tie for them however and with Wednesday still in top form with a hammering over Leeds (6-0) and a credible draw at Burnley (1-1), a Round 5 tie likely awaits them. Macc have also been boosted by the tie and packed house at Moss Rose. Financial difficulties still await them but with form ok and the club just outside the play-off race, the next few months will be very interesting for Macc. While the occasions are rare, the FA Cup still means a lot to enough people to show it still has a place in today’s game. Just remember that when you next watch a dull TV FA Cup tie, it still matters. It did to the 5,873 fans for this game.

- Programme: 6/10 (good amount of material for a Skrill League programme) 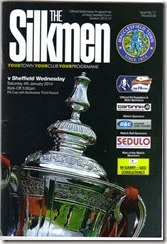 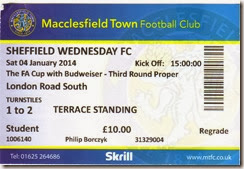