Another Christmas and another week in Scotland allowed me to have a fairly vast choice of games for the festive period. Having put myself through 90 minutes of shite at Tynecastle on Boxing Day, the next Saturday it was back down to grassroots level. With the weather trying to recreate some sort of Atlantis style island on the UK, a list of 12 games were created and then the worst game of weather bingo was played on the Saturday morning. With choice #1 at Benburb falling early on, Edinburgh United were lucky #2 as their clash against Harthill Royal went ahead. 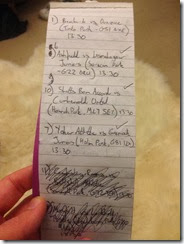 Edinburgh United plays in the Colinton area of Edinburgh which is situated in the south-west of the city. Originally sited within a steep-sided glen on a convenient fording point on the Water of Leith, Colinton's history dates back to before the 11th century. The nearby 15th century Colinton Castle was destroyed by Oliver Cromwell during his invasion of Scotland. Following repair, the castle was subsequently partially demolished by the artist Alexander Nasmyth in order to create a picturesque ruin. Other notable figures with connections to Colinton include: Robert Louis Stevenson who spent the summers of his childhood at the manse when his grandfather was the village's Parish Minister and the philanthropist James Gillespie. Between 1909 and 1915, the War Office constructed Redford Barracks to the east of the village. The barracks represent the largest military installation built in Scotland since Fort George in the Highlands although they are now earmarked for disposal as part of the defence spending review. The village was the location for numerous mills producing textiles, snuff, and paper and it is thought that the first banknotes produced by the Bank of Scotland were printed on paper manufactured in Colinton. 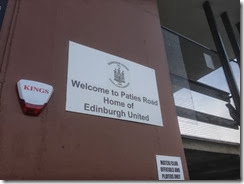 Now that The Spartans have withdrawn their Junior team into the East of Scotland League, Edinburgh United are the only side in Edinburgh now to play in the Junior Leagues. Formed in 1985, from a group of players at North Merchiston Juveniles, United won the East Region Division Two in their first season but with only a few hardcore spectators, have struggled to push on. Instead, spending most of their time in the lower divisions of the East Juniors. They finished last season in 15th place but the small reshuffle in the East Region last season seems to have galvanised United and they went into this game in 2nd place. 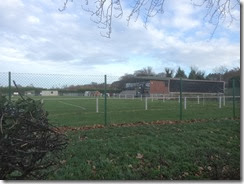 With a brilliant 7 away wins from 7 in the league so far, they were only 3 points behind leaders Dundonald Bluebell. Dundonald had won 2-0 at United in September, with the crunch return game to come later in 2014. For this game however, they welcomed a team who were struggling as Harthill Royal came to Paties Road. With only 3 points all season, they were clearly bottom of the league and a huge 7 points behind 13th place Rosyth. Harthill were rumoured at the end of last season to be thinking of taking an absence just to sort themselves out on and off the pitch (much like Bankfoot Athletic in the North Division), but they persevered and stuck at it. 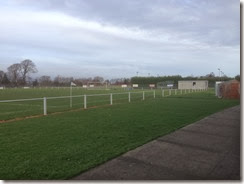 A short(ish) walk from Slateford station, Paties Road Stadium is a decent venue for this level, settled very much in suburban Edinburgh. A large covered stand with seating benches straddles one side of the pitch and provides much needed cover for when the weather (like for this game) is absolutely perishing. The rest of the ground is grass standing with no old school grass banks such as those at Linlithgow. A simple enough venue, but set in the pleasant place that it is, Paties Road is somewhere that I would be happy to visit again, especially in the summer. (It was far too cold to head away from the stand and round to take pictures of the stand from the far side!) 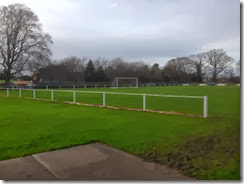 For a team that has conceded 46 goals already this season, Harthill needed to keep it tight early on and try to hit United on the counter attack. This plan lasted just 5 minutes as a mazy run from Kayne Paterson saw him brought down in the area and Chris Gordon easily dispatched it past Davie McGuiness. From then on, Harthill showed why they were bottom of the league as United cut them open at will. It didn’t take long for United to add more goals as Kenny McMillan romped down the left on 14 minutes and his cross was spilled by McGuiness to allow Kris Mitchell in for an easy finish. Harthill then from that kick-off laughably gave the ball away which allowed Mitchell to again score from a McMillan cross. 16 minutes and it was already 3-0, oh dear. Amazingly, Harthill managed to survive until HT conceding no more goals but this might have been more down to United relaxing than the Royal getting better. 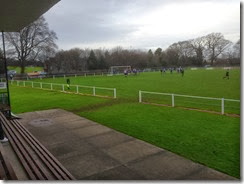 To be fair to the Royal, they must have received some bollocking at HT because they looked a much more determined outfit at the beginning of the half. They even had a few half chances to give the United defence something to think about, especially United goalie Ross Combe who must have been perishing after not needing to do anything for the first 45 minutes. Harthill then had all their work undone on 57 minutes as a simple long ball forward completely took out their defence. This allowed McMillan to get forward and fire home for #4. With the game now quite open as Edinburgh looked to boost their goal difference, they added another 3 goals before full-time. McMillan completed his hat-trick with two close range finishes, the 2nd being a header while stooped on the floor. The final goal scored right at the death sadly epitomised Harthill’s performance. A low driven cross was diverted in by Colin Robertson as no danger looked on. United declaring at 7. 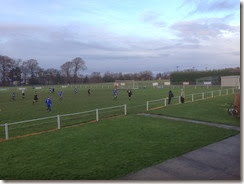 United have kept up their surprise form so far this season as the games after this one has seen them beat Dunbar United 6-3 before another away win, this time at Haddington Athletic. This continued good form along with Dundonald Bluebell seemingly losing some bottle means United currently sit in the nose bleeding position at the top of the pile. Harthill’s next game saw them grab a famous point with a 2-2 draw against Lochgelly Albert to leave them now only 9 points behind Rosyth. A return visit in the summer to Paties Road Stadium is a must, mainly to enjoy the far side and hopefully a tighter game! It was good to see another new ground up in Scotland, but it was far too cold to really enjoy it as the bovril was nearly spilt through shivering! An extremely cold way to end watching football in 2013.

- Atmosphere: 3/10 (the Harthill ultras tried their best to encourage their team)

- Programme: N/A – did issue earlier in season but a fall-out in the committee stopped it