It had been decided a while back to head out to Rome for a family holiday. Keen to enjoy the tourist sites and nice weather I also fancied a bit of calcio whilst out to my first visit to Italy. When the dates were confirmed that we were out there I had a look to see and lo and behold, Lazio were playing a Europa League tie on our last full night in the Italian capital. It was almost like I had suggested those dates to see this game… 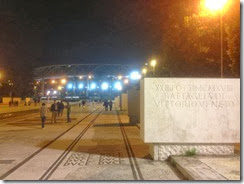 I could write about 20,000 blog posts on the history of Rome, spanning through the Roman era, Renaissance, the Mussolini reign and recent political turmoil but I’ll just state that it’s a brilliant city to visit. We did most of the major tourist hotspots and while it was extremely busy with hundreds of people around the top top places, the warm weather and friendly nature of (most!) locals, meant it was another capital that I would recommend a visit to. I also did a wee tour of the other 1960 Olympic Games stadia that are still in site today (and will be a future blog post!) just to add a bit of sporting history to the trip! 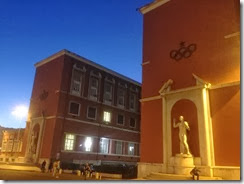 Società Podistica Lazio (or SS Lazio) was founded in 1900 making it Rome’s oldest football team. Wanting to encompass more than just the city of Rome that they were from, the club's original founding members chose Lazio, the same name as the region of Italy in which the club is located. After some early friendly activity, Lazio officially gave birth to its football section in 1910 and joined official league competition in 1912 as soon as the Italian Football Federation began organising championships in the center and south of Italy. In 1927 Lazio was the only major Roman club which resisted the Fascist regime's attempts to merge all the city's teams into what would become A.S. Roma the same year. This was due to Giorgio Vaccaro, a general in the Fascist regime and influential in the sporting landscape. A true Lazio fan, Vaccaro defended the club's right to keep its identity and Lazio were the sole opposition to the new team in Rome’s new football landscape. The club have never been the most successful in Italy with only 2 Serie A titles (in 1974 and 2000) as well as having to spend some time in Serie B. Mainly due to corruption scandals and subsequent points deductions. 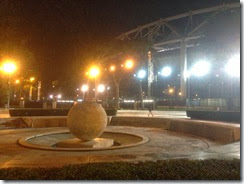 The Stadio Olimpico is part of the still standing infrastructure of Rome’s 1960 Olympic Games (future blog post!) and dominates the northern part of the city. The stadium dates from well before that however with the original ground opening in 1937. Called originally Stadio dei Cipressi it was part of the overall Foro Mussolini (later renamed Foro Italico after the war) and explains the large monument to Mussolini built by the entrance nearest to Duca D’Aosta Bridge. Today, a beautiful venue that takes a lot of ideas from classic Roman architecture but with a modern twist after modernisation work was completed on the ground in 2008. Today, the Olimpico is dominated by 4 main areas, the Curva Nord and Sud (home to the Lazio and Roma ultras respectively) which run behind both goals. While the side of the ground houses the Tribuna Tevere and Monte Mario and provides great views of the ground. Considering the history of the place and some of the matches to take place here, such as 4 Champions League finals or the 1990 World Cup Final, I felt extremely lucky to attend a game here and will remember this for some time to come. 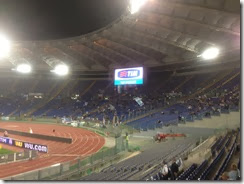 Lazio had only finished 7th in Serie A last season but a famous Coppa Italia win over Roma had put them straight through to the Europa League Group Stage. Drawn in the intriguing Group J alongside Trabzonspor, Apollon Limassol and the opponents for this game Legia Warsaw. Lazio’s Serie A form had been ok up to this point, expected wins over Udinese and Chievo with a 4-1 pasting at Juventus in between them. It left them in 7th position and with the big, big Derby della Capitale (Rome derby) upcoming on the Sunday after this game, the arrival into Rome of the Polish champions was seen as a good warm up. Legia won the Ekstraklasa last season but then proceeded to to crash out of the Champions League in the Play-off Round with an away goals defeat to Steaua Bucharest. Going well in the Polish top flight and with 3 rounds of European football already this season it was a tough one to call. 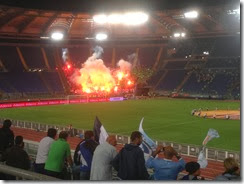 The Legia fans also need a paragraph to themselves as despite the excellent reputation Lazio’s Curva Nord have, the Legia Ultras were outstanding. Around 3,000 mental Polish fans brought with them flares, constant chanting, clearly rehearsed routines and generally a brilliant atmosphere that fired a football trip to Poland far up my “to-do” list. The pic above was taken just before KO and shows the Legia fans enjoying themselves early on and something I just haven’t experienced before. Fantastic. The Curva Nord were also in good voice with a smaller display during the game (they were warming themselves up for the Sunday) and despite the stadium only being 16% full, it was an atmosphere that sounded like the ground was packed out. 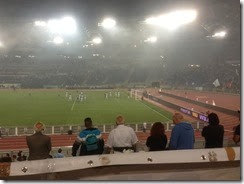 As the game kicked off and the smoke from Legia’s flares died down, it was clearly quite evident that this wouldn’t be a high scoring game. Lazio were saving themselves for the derby and Legia sitting back and trying to hit the home side on the break. Despite this conservative approach, Legia should have taken the lead on 21 minutes when some nice build up play found Jakub Kosecki alone in the area. He controlled the ball well and smashed it towards the roof of the net only to see Federico Marchetti produce an outstanding save to tip it over. Kosecki had the Lazio fans on edge just minutes later when he curled a shot just past the post as the Biancocelesti hadn’t got going. Clearly Lazio boss Vladimir Petković gave them a bollocking at HT as they took the lead within 6 minutes of the restart. Keita Baldé was making his first ever senior start and his cross from the left was met by Hernanes who powered his header past Wojciech Skaba. Hernanes nearly made the game safe soon after when after his mazy run, he fired a shot off the post. In the end, Legia didn’t have anything to answer for that Hernanes goal and Lazio started off the group stage well. The Legia fans though, they were still singing. 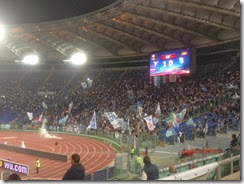 Despite the football being naff, this was a brilliant experience. A ground steeped in history (even Psy has played here, no really, he has) with an outstanding atmosphere, it is one I would recommend to everyone. To purchase tickets just don’t forget your passport! Lazio lost that Rome derby 2-0 as Roma ride high in Serie A, but they are steady in Group J with draws against Trabzonspor and Apollon as they are looking good to reach the next stage of the competition. Legia have lost all 3 games so far without scoring a goal so it looks likely they will have just domestic duties to look forward to in 3 games time. I’ll be back in Italy one day to catch some more calcio, but now my Italian team is firmly the boys in blue from Lazio. Forza Lazio!

P.S – Action from the Legia Ultras on the night can be viewed here.

Photos from Lazio vs Legia Warsaw

- Food: N/A – ate from a van on the River opposite the Foro Italico, was good 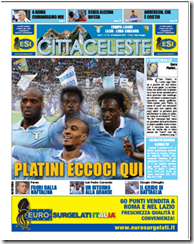 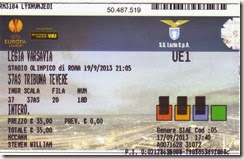