Wasn’t planning to do much on this Tuesday evening but when my Macclesfield Town supporting work colleague asks if I want to watch some tinpot football, we all know what that answer is going to be. Amazingly this would be my 4th time watching Macclesfield but this game being right on my doorstep (give or take 5 miles) it was time to see The Hive and of course, fucking Edgar Davids! 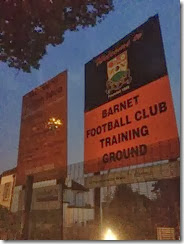 Barnet have now moved to Canons Park, which is residential suburb, situated in the north west London Borough of Harrow. "Canons" refers to the canons or monks of the Augustinian priory of St Bartholomew in Smithfield who owned the manor of Stanmore before the Reformation. Canons Park is largely located on the site of Cannons, a magnificent early 18th-century country estate built between 1713–25, by James Brydges, 1st Duke of Chandos. Although the original Cannons mansion no longer exists, the later building on the site, erected by the gentleman cabinet-maker William Hallett in 1760, now houses the North London Collegiate School. A large portion of the original gardens of the Cannons estate now form the public pleasure gardens of Canons Park, which are a registered Grade II Historic Landscape and contains several listed buildings. 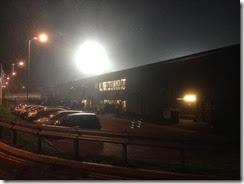 The Hive has had a difficult and controversial history that I must be careful to discuss as I may end up annoying supporters from other clubs, mainly Wealdstone. Construction at the Prince Edward Playing Fields began in 2003 as a home for the Isthmian League club, however just one year later the construction partners went into liquidation and the construction stopped. Harrow Borough Council then put the site up for tender and in came Barnet. Bit controversial and you can read a far more detailed and informed history here. Today the ground just feels like a temporary venue, a smart one nonetheless, but temporary. With a path through from the opening of the training ground and to the side of a few training pitches, you rock up to the small East Stand which has the strange look of an office building with some seats and a roof attached to it. Behind both goals are some small covered standing areas with the large West Stand dominating the ground and providing a decent view of the action. Sadly away fans were placed in this large stand meaning that it was a nice £21 (TWENTY ONE) to get in and watch non-league football. 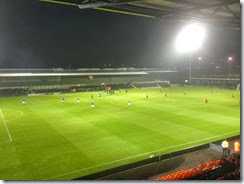 Despite Barnet beating Morecambe 4-1 towards the end of last season and giving it the big large, they were still hilariously relegated with a brilliant loss of form at the end of the season. With Edgar D still in charge (sort of, its a coach sharing arrangement going on these days apparently), Barnet had been making decent inroads back in the Conference (or the Skrill Premier) until defeat at FC Halifax Town had saw them lose all form and slumped to 8th in the table. Davids, who has now given himself the #1 shirt as some form of twat badge, hadn’t made his Conference debut, until this game… They were playing a team also completely out of anything, form, money, fans (sorry) as the Macc Attack were in town. Relegation hit them hard and they went for instant promotion, helped by a FA Cup run to the 4th Round, but they fizzled out and finished in 11th. With a new boss and generally new team the Macc Attack were in the relegation coming into this game, trying to emulate near neighbours Stockport in hosting giants like Vauxhall Motors and North Ferriby United. Someone’s form had to improve! 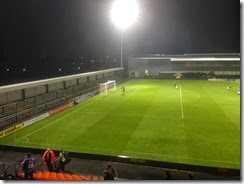 Unsurprisingly the home side went for it early on against a team with a goal difference of –5 as Mark Byrne and Edgar fucking Davids fired shots wide. Davids played the role of everywhere as every pass, throw in and free kick had to come through him. One of these such attacks should have resulted in a goal as Marciano Mengerink was taken out by Paul Turnbull with one of those “what are you playing at?” tackles. Mengerink stepped up but the former SDV Barneveld player had his penalty saved by Rhys Taylor. Barnet kept going but the Macc Attack pulled off the brilliant rope-a-dope tactic on 27 minutes. Winning a free kick from a rare attack Peter Winn’s cross found Connor Jennings all alone and he side-footed the ball past Graham Stack. Macc Attack then produced the unthinkable with a 2nd goal to stun the silent crowd into, silence. Barnet tried playing some total football in their own penalty area instead of clearing the ball away, they lost it and after some misplaced passes, the ball fell to Jennings who fired the ball into the top corner. Those Macc fans who paid £21 to see this were beginning to think it was worth it! 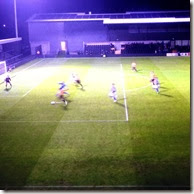 Macc Attack brought on the 41 year old Efe Sodje to tighten the defence up as Davids now took up the role of sweeper as the Bees launched forward. In fact both sides seemed content let the game fizzle out for a wee bit as only long range efforts were being fired at both goals. After 20 minutes of the half, Sodje’s knees couldn’t take it anymore and so he was replaced by Lewis Chalmers as the Macc Attack began to be pushed further and further back. It was already attack v defence when Luisama Villa fed Mauro Vilhete who lashed the ball in. I hadn’t seen a game like the Alamo for some time but for the remaining c.20 minutes, Barnet battered the Macc Attack in trying to find an equaliser. Ex Gretna dwarf John-Paul Kissock came on to run after long balls but Barnet couldn’t offer that much in the last few minutes and the Macc Attack pulled off a famous win. With a 50% win ratio when I see them, I’m clearly a lucky mascot. 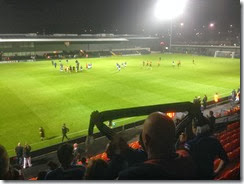 With my work colleague Phil a happy man and the rest of the hardy bunch of Macc fans (around 100 of them) off back to Cheshire, it was good to see Barnet lose, I’ll be honest. Macc Attack have woken up since this game and have taken 10 points from the last 12 and a 7-0 win over Vauxhall Motors in the FA Cup. Currently in 15th, their relegation fears have eased somewhat and will now look to chase current 5th place side Braintree for the playoffs. 9 points to catch up. Barnet look like they will be down in the Skrill for quite some time and things have got worse since this game with the large West Stand I sat in, now in trouble with Harrow Borough Council as they have broken planning regulations over the height of the stand and the floodlights. On the pitch, they are still in 8th as Davids has got used to the Skrill Premier but elbowing Wrexham’s X in their recent league game and picking up a suspension. It’s a strange club, currently playing at a strange ground which isn’t really their home in a strange league. Do I feel for them? No.

Photos from Barnet vs Macclesfield Town 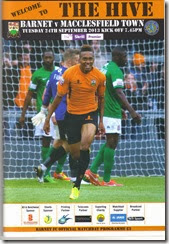